Hot Topics
Russia, China and Nuclear Arms: Interview with the Vatican Secretary of State
Chinese Communist Regime To Put on Trial Cardinal Emeritus of Hong Kong
Cardinal Jozef Tomko Died, the World’s Most Long-Lived Cardinal
After the Supreme Court’s Ruling, the State of Kansas Approved Abortion by Referendum
Pope Makes Clear What He Understands by “Synodality”: “It’s Not the Last Minute Recipe of the Church”
Pope Appoints as His Personal Health Assistant the Nurse “Who Saved His Life”
Pope Takes Up Again the General Audiences and Talks About His Trip to Canada
Pope Francis to 50,000 Young People in Medjugorje: “It’s Not Enough to Come Out of Oneself, One must Know to Whom to Go”
Bishops Evidence Sectarian Drift of U.S. Congress
Pope Francis Asks the Church to Pray for Small and Medium Businesses During August

To mark World Refugee Day (June 20, 2019), Save the Children released a powerful series of Polaroid images from children living in three of the largest refugee settlements in the world.
Conflict has driven millions of children from their homes and their countries of Syria, Myanmar and the Democratic Republic of Congo, forcing them to rebuild their lives in entirely new surroundings. Despite the horrors they’ve endured and the challenges they face, their optimism for their future remains.
In a series of workshops that Save the Children ran with child refugees living in Jordan, Bangladesh, and Uganda, their portraits were captured using Polaroid cameras and they were then invited to draw their hopes and dreams for the future.
The resulting drawings show not only loss and sadness, but also the resilience and determination of the children. They describe both the trauma of losing loved ones and having to flee their homes because of fighting and what they want to be when they grow up,  whether to become doctors, footballers or teachers.
Beaufret*,14, drew the horrors he witnessed in the Democratic Republic of Congo before he and his family fled to Uganda.
“Here is my house. Here is the person who cut my father. Here are the others, already dead. We are jumping over them while we are running. You can see the blood when they are dead… 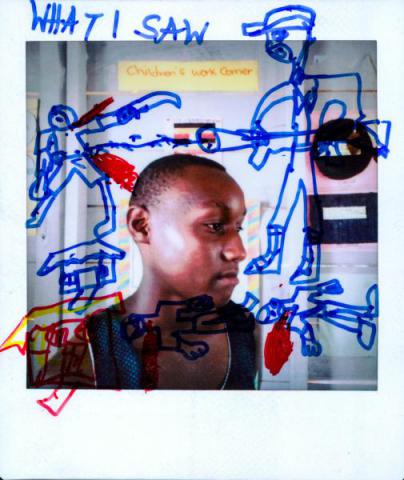 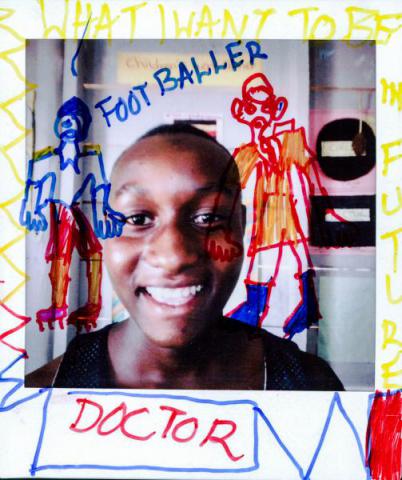 Despite his tragedies, Beaufret*’s other photos reflect his tenacity and hope for his future:
“Here I am standing and the local doctors when we are helping people. Here we are finished now in the hospital, we are now playing football.”
Hasina*, 13, is a Rohinyga refugee girl living with her parents and four siblings in Cox’s Bazar, Bangladesh. She likes to make flowers and learn handicrafts and her favorite subject is Burmese because it reminds her of home.
“I was afraid of ghosts when I first came to the camp because they make the people senseless and sometimes crazy. Ghosts are what dead people become.” 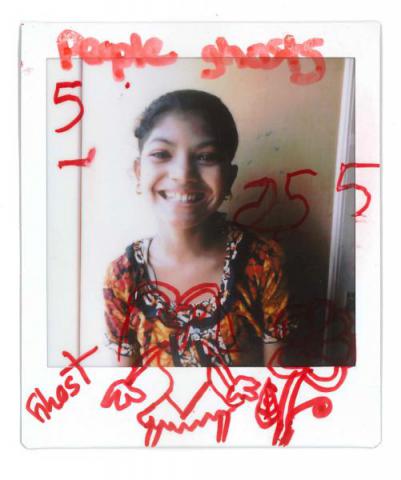 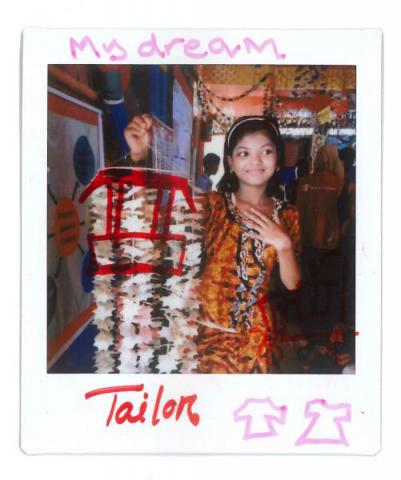 “I want to be a tailor when I am older and to make my own clothes and I can use the money I make [tailoring] to get treatment if I became ill and to help my family.”
Omar*, 15, is from Daraa Syria and has lived half his life in Za’atari refugee camp, Jordan. He says he was very happy in Syria but his family had to leave because they were close to a lot of death and their house was destroyed.
“I have drawn a doctor because this is what I want to be – I want to build a hospital and call it Syria. My dad hopes I will become a doctor. I also want to be a footballer – here you can see my fans chanting my name. I also, want to help all the refugees in the future. Like provide aid for them and help them access education because I’m a refugee too.” 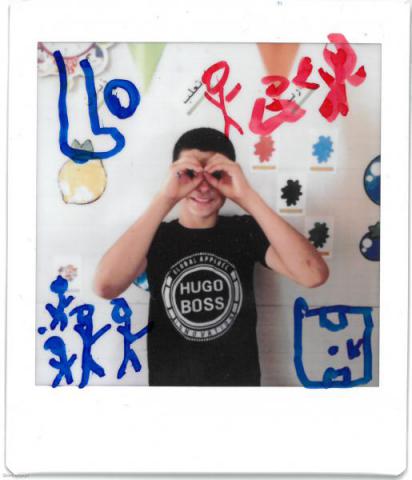 The world is currently experiencing the highest levels of forcible displacement on record. Every two seconds a new person becomes displaced and children are disproportionally affected by the crisis. Latest statistics show an unprecedented 70.8 million people around the world – more than the population of the United Kingdom – have been forced from their homes as a result of conflict or persecution, including around 35 million children.[iii]
Renewed crises in the Democratic Republic of Congo and Myanmar, along with the on-going conflict in Syria have fuelled the overall rise in the displaced and refugee population.
People from these three countries account for the highest number of refugees globally, including 5.44 million Syrians[iv], 900,000 [v] Rohingya and 850,000 [vi] Congolese. These numbers do not include those that have been forcibly displaced within their own country.
Save the Children helps child refugees from the DRC, Syria, and Myanmar through the provision of food rations, psycho-social support, education programs, child-friendly spaces, and health centers.
Syria – Za’atari Refugee Camp, Jordan

Let us continue to invoke the intercession of Our Lady, so that God might give the world peace, and let us pray in particular for the Ukrainian people.