Both the Cuban people and the Catholic Church in the country are living through a time of change, and yet the lack of true reforms and the lack of resources together constitute one of the greatest challenges facing society. Such is the situation, as explained to the international Catholic pastoral charity and pontifical foundation ACN International by Father Rolando Montes de Oca, a Cuban priest of the Archdiocese of Camaguey, who is currently living and studying in Rome. Aged 37, and belonging to the “Schönstatt” movement, he expresses his concern at the lack of a genuine religious opening in Cuba – consisting not merely of words but of deeds as well – in which families can freely choose the education of their children and the Church is allowed more places or centers in which it can demonstrate that “we are not a danger to Cuban society” but in fact quite the contrary.
The Castro era finally and definitively ended in April 2018. Fidel and Raul Castro have now been succeeded by Miguel Díaz-Canel as the country’s new president. How do the people see the new government?
I would say that it continues to be exactly the same as before. President Díaz-Canel himself has repeated on a number of occasions that his mission is to assure the continuity of the so-called “historical process”, or in other words the socialism initiated by Fidel Castro as the political, economic and social path to follow. Moreover, on his very first address as president, he stated that this continuity is the absolute priority of his government and insisted that it would still be Raul Castro who will take every fundamental decision for the country.
One of the first administrative actions of the new government was the promulgation of the new Constitution, which was endorsed by the Cuban parliament in July. The stated intention of the government was not only to open up to the market economy but also to strengthen civil rights. How is the question of freedom of religion dealt with in the new Constitution?
There is freedom of worship, in the sense that people can meet together in churches to celebrate their faith. The articles already existing in the former constitution, which stipulate that the Cuban State “ recognizes, respects and guarantees religious freedom” and that “all individuals have the right to profess, or not profess, a religious creed”, have remained unchanged. However, it is important to understand what is meant by “religious freedom”. In my view, it should not refer simply to freedom of worship. Nonetheless, these declarations regarding religious freedom might be seen as a point of reference, an ideal towards which we can advance through dialogue.
The tourists who come to Cuba see among other things churches full of people and an impressive participation in worship by the Catholic faithful. Is it possible to say that Christians can now freely live their faith? Would you say that the era of discrimination has come to an end?
Of course, things are not as they were in the time of the old Soviet Union. And even though the Internet is still not available to all the Cuban people, there are more and more people able to connect to the network, so that the modus operandi of the government is becoming more and more publicly visible, in the sense that it can cross national frontiers and is increasingly liable to generate notice in the international sphere. For its part, the Cuban system is very much concerned to project an image of democracy, of a Cuba that is fully free.
Nonetheless, although there is freedom of worship, I believe there is still a long way to go before we can arrive at true religious freedom. For example, Cuban families do not have the right to choose what kind of education they will give to their children but are still forced to educate them under a Marxist atheist ideology. Despite claiming to offer a secular education, the philosophy that underlies it in regard to its analysis of history and reality is still very much an atheist and materialist one.
Does the Church also face restrictions in religious matters?
The pilgrim Church in Cuba is denied the right to its own space in the mass media. Except during papal visits and for an additional few minutes a year granted to the bishops on the local radio stations, there is no access to the media for the Church. Another major obstacle has been the ban on building churches and places of worship, despite the fact they allowed two or three churches to be built recently, after almost 60 years of petitions and dialogue.
There are also some very commonly occurring incidents that happen in the villages and towns, such as bans imposed on practical pastoral activities and sometimes against certain individual priests or certain specific works of charity on the part of the Church and so forth. These are disagreeable incidents, the origin of which is not clear – whether they are by order of government officials or by the independent decision of minor regional authorities.
And although, after so many years of religious repression, there is now some progress to be seen in regard to freedom of worship, the idea that seems to prevail in many people’s minds is that if they overstep their authority in acting against the Church, it will not cause them any problems, but if on the other hand, they go too far in favoring religion, they may well have to face problems as a result. 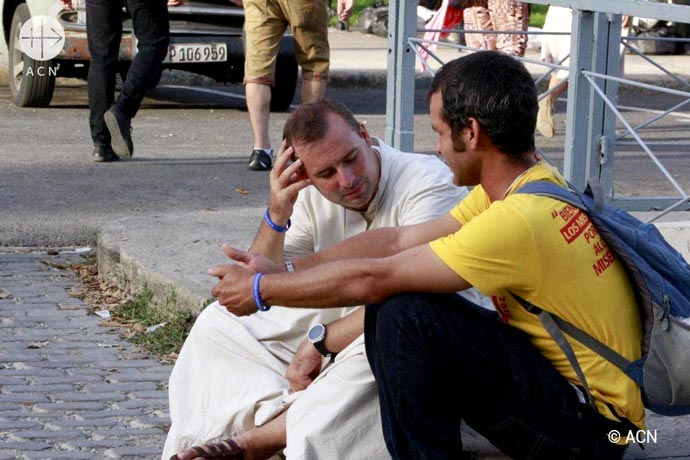 And how is the Church to overcome these restrictions?
Although the Church in Cuba faces many difficulties, she will never yield. We are denied regular access to the mass media, yet we do not cease to convey the Gospel message. In the dioceses, the bishops are producing magazines and newsletters which, in addition to speaking about faith, aim to enlighten the ordinary lives of the Cuban people. Although we don’t have access to education, because as I have already mentioned, it is practically entirely atheist, we do have our own formation centers where we can convey true Christian and civic values. It is extremely difficult to build churches, but in many small towns and villages that do not have them, there is still the Christian community, living, celebrating and bearing witness to faith in the private homes of those who open their doors to us so that we can celebrate the Eucharist and offer a Christian formation.
What is the role of the Church in Cuba?
We strive as a Church to engage in dialogue and show that we are not a danger to Cuban society. And still more than this, the Church has a great deal to offer and has the right to be allowed to have certain spaces in which it can better carry out this service. The aim is not to oppose each other but to help become united, by respecting the diversity of ideas, and so that one day it may be possible to arrive at a Cuba “of all and for the good of all”, without excluding anyone.
And what is the biggest challenge facing you?
In my view, the problem that most affects the Cuban Church at the present time has to do with her mission as a mediator in the process of national reconciliation, which is something we regard as necessary today. The Cuban people are divided, and the Church in Cuba is striving to find space for everyone and constantly calling on people to dialogue. Tragically, ever since the beginning of the “conflict”, there has not been any openness to dialogue, either on the part of the official government positions or on the part of the most radical opposition. As a result, the Church is sometimes accused of being “communist” and at other times accused of allowing herself to be manipulated by the opposition or by US political interests. Both charges are false; the Church in Cuba is simply not being properly listened to. While the Communist Party demands our silence in the face of the grave and continuing social problems, as the price of good relations between the Church and the state, the other side often interprets the mission of the Church as a militant political posture, which excludes and condemns any relationship with the government, in absolute terms. Whereas the position of the Church in Cuba is not as an absolute belligerent in either sense. The Church is a mother, she is not the enemy of anyone. The Church is the Spouse of Christ, and she will not become wedded to any earthly powers, however difficult this may be for many to understand. 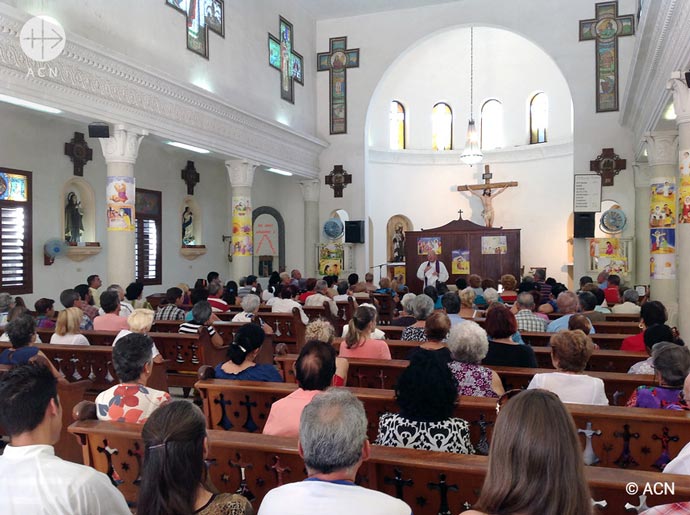 How do you see the future of the Church in Cuba, and how can the charitable agencies such as the foundation ACN International help her in her needs?

It is very hard to imagine the future of Cuba. We dream of a future of peace, built through dialogue, justice, and forgiveness. But whatever may happen, the Church in Cuba will not give up in the face of the difficulties. She has learned to open windows when the doors were closed. The Church in Cuba is a community of hope which strives to transmit this hope to a society that is very much in need.
The problems facing the Church in Cuba are the problems faced by all the Cuban people. One of the most serious among them is the lack of financial resources. ACN has been very much involved in the evangelising activity of the parishes and has supported the formation of new priests in so many different ways, while also helping our mission through the publication of Bibles, catechisms, prayer books and teaching materials and funding the purchase of vehicles to enable the missionaries to travel and reach their communities. You have helped us to rebuild our churches when they were damaged by natural disasters, and in so many other ways besides. The enormous aid given by ACN to the Cuban Church has borne, continues to bear and will bear fruit in the future as well. Many of these fruits can indeed already be seen on a simple visit to the country. It is as though God is acting through the action of ACN, sometimes in ways that are unseen but which continue in the background and exercise their influence through conversions, the diffusion of Christian values and more humane attitudes, etc.
You yourself have known the work of ACN ever since your childhood, have you not?
I remember with great gratitude that day when I was still a little boy and when our parish priest and catechist arrived, overjoyed, and bringing with them the Child’s Bible produced by ACN. I was only little then and I wanted to have good book about the faith, explained in the language of children. I read the whole book and I fell in love with God through the pages of this Bible. I still keep it in my home to this day. And since then I have used it many times for the religious instruction of children. Yes, the ACN Child’s Bible is something closely linked to the roots of my personal experience of God.

The prayer of adoration is the prayer that makes us recognize God as the beginning and the end of all of History. And this prayer is the living flame of the Spirit that gives strength to witness and to mission.