Hot Topics
Rector of Saint Óscar Arnulfo Romero Major Seminary in Diocese of Zacatecoluca, El Salvador, Murdered
Bishops Petition US Congress for Emergency Aid for Catholic Schools
US Bishops Express Solidarity With Those Suffering in Lebanon
Cardinal Turkson’s Message for Annual Day of Tourism
Message to Zenit Readers About Sending Newsletter
Pope Francis Sends Donation of 250,000 Euros to Church of Lebanon
The Fazendas in Argentina – There is no Revenge Better than Love
Peruvian Solidarity: 100 Dining Rooms for 10,000 People
Pakistan’s Minorities Denied Housing in Muslim Areas
60 Years of Independence: the Catholic Challenge in Africa

In her private diary, Mother Teresa writes: “Once, I was speaking with a priest about the kind of friendships that can take us away from God. He confessed to me: ‘Mother, for me Jesus is everything. I have neither time nor space for any other friendships.’ For me, this was the explanation why this particular priest had brought so many people to God. He was always united with Him.” This is the secret of the saints. They are always closely united to God.
Filled with the spirit of this relationship, they are able to perform works of mercy. Don Luigi Orione, the founder of the “Little Work of Divine Providence” (“Piccola Opera della Divina Provvidenza”), was, in the words of Pope John Paul I, “a strategist of mercy”. He himself saw himself as the “servant of Divine Providence”. He did not ask many questions but simply acted. His guiding motto was this: “Do not ask who he is, what he is, or what he believes. Ask only about his pain.” In this spirit, he founded orphanages and vocational schools. For he knew that the future of the young and abandoned depends on how and what we teach them. Inspired by this same spirit, and for over 20 years now, the congregation of Don Orione has been running mission stations for hundreds of Catholic families in Bardhaj, at the foot of the mountains in the diocese of Shkodra, in northern Albania. 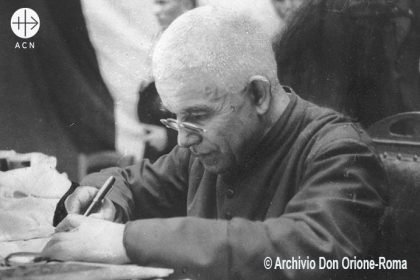 Canonized 15 years ago: Don Luigi Orione, the founder of the “Little Work of Divine Providence”.

After the collapse of the Communist dictatorship of Enver Hoxha, they had emerged from the craggy mountain villages, where they had hidden away from the tyranny of the atheist regime, and come down into the valleys – in rags and tatters, emaciated, but with God in their hearts. Today three missionaries, Don Rolando, Don Dorian, and Don Giuseppe, care for these four thousand or so souls. They also run four other mission stations in the mountain regions, all of them inaccessible an all-terrain vehicle. “We travel around 400 km (250 miles) a week”, they tell us. They do not ask questions, they act. They ease the bodily pain with medication, still the thirst for God with catechesis, the physical hunger with bread, and the spiritual longing with prayer. They bring God to people and the people to God. Roughly 60 percent of Albania’s close on 3 million inhabitants are Muslims. Catholics make up around 10%. They have maintained their faith throughout the decades of atheist dictatorship. And one of them, of course, was Mother Teresa, who at an early age traveled to India. Many of these Catholics hardly know their catechism. But, up in their mountain villages, they eagerly look forward to the visits of Padres Rolando, Dorian and Giuseppe. 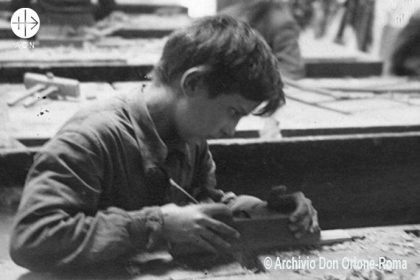 Looking to his future: an orphan in one of Don Orione’s vocational workshops.

However, when they are late – since the roads here are really barely worthy of the name – they begin to fear that the old Jeep has broken down again, as it has often in recent years. For without a vehicle, the mission and its work would grind almost to a standstill, and that would be painful for everyone. Aid to the Church in Need has promised them €14,000 for a new vehicle.

We are all in need of the Father who extends His hand to us. To pray to Him, to invoke Him, is not an illusion. Illusion is to think we can do without Him! Prayer is the soul of hope.