Hot Topics
Half a Million Catholics at Risk of Imminent Schism Due to the Liturgy
Who Are Qatar’s Christians? They Are More than 13% of the Population, but Without Full Religious Liberty
Jesuit Resigns from Vatican Secretariat for the Economy and Is Succeeded by a Spanish Layman
Russia Accuses Pope of Russophobia after His Statements to a Jesuit Magazine
China’s Response to the Holy See’s Protest: “China Is Prepared to Work with the Vatican”
Cardinal Joseph Zen Ze-kiun, Bishop Emeritus of Hong Kong, Receives Sentence from the Chinese Communist Government
China Defaults on Agreement with the Vatican One Month after “Renewing” It
How Will Jesus Come and How Can We Recognize and Welcome Him? Pope’s First Advent 2022 Reflection
Russia imprisons two priests. Ukrainian bishop intercedes on their behalf
Pope’s Three Guidelines to the International Theological Commission

Tony Pereira is 51 years old and an international master chef who lives in Venezuela. Having graduated in various prestigious gastronomic academies, he has worked in a number of five-star hotels in his country. His working day starts at 7 a.m., but Tony actually gets up every morning at 4 o’clock. While the city is still sleeping, he gets on his motorbike and drives to the parish of San Sebastian in Maiquetía, in the Vargas municipality, close to the capital Caracas. The first thing he does on entering the church is to kneel before the Blessed Sacrament and give thanks for the new day that is dawning. Then he goes into the courtyard, lights up the stove fuelled by an old bottled gas canister, takes down a couple of enormous brass saucepans and, day after day, come rain, come shine, dedicates the hours before going to his official place of work to preparing an exclusive menu for a group of very special guests. 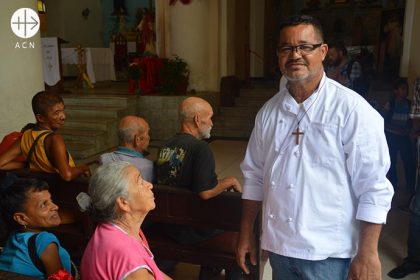 An exclusive menu – not because of the exquisite nature of the ingredients, but because the most important condiment he adds is an abundance of loving kindness. The dedication and commitment of Tony and his helpers are all the greater, given that the rest of the ingredients, however simple, are difficult to get hold of in this country so sunk in the poverty of its economic and social crisis. It is a challenge to find the necessary ingredients, but our chef uses all his creativity to ensure that the menu is a varied one. Today it is rice with chicken. 10 kg of rice and four or five chickens, Tony calculates, talking to himself.

And the guests? Over 150 of them, mainly children and young people, who come here as they do each day to this improvised dining room in the inner courtyard of the parish of Saint Sebastian for their only hot meal of the day. Many of them would have nothing to eat at all if they didn’t come here. Father Martin, the priest, middle-aged and brimming over with cheerfulness, welcomes the children and old people at the door. Before going into the dining room he greets a young boy in a blue shirt, 11-year-old Felipe, wide-eyed and with an open smile. “Every day he comes here from the top of the hill, pushing his father in a wheelchair. Then he has to go and climb the hill again; can you imagine how hard that must be for a boy of his age?” Felipe goes up to the priest, “My dad couldn’t come today, he has a fever, so I left him alone at home. Maybe I could take him some food in a bowl?” The priest nods with understanding. “You eat something first, then we’ll prepare something for you.” Tony also comes up and says hello. He knows him well. “He’s a good boy. It’s wonderful the way he looks after his sick father.” 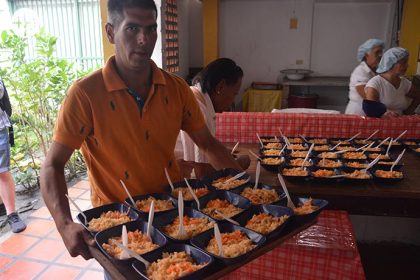 Every weekend, in addition to the dinners in San Sebastian, Tony, like the chef he is, prepares “banquets”. These are not weddings or first Communions, nor are they served on porcelain plates with crystal glasses. No, they are simple lunches in the poorest hillside suburbs, above all for the local children, who come here bringing their plastic containers. ‘Arepas’ (tortillas), lentil soup or whatever Tony can get hold of cheaply with the help of Caritas and the parish of San Sebastian.

Broad-shouldered and strong-armed, Tony doesn’t much like talking about what he does; he prefers to talk about why: it’s because in the face of each one of these children and old people he sees the face of Christ. Over his immaculate white chef’s jacket he wears a simple wooden cross that says everything.

His face clouds over somewhat when he talks about the situation in his country. When he was studying to be a chef, Tony used to work as a street cleaner to fund his studies. It was there, he tells us, that he first saw the great need among the people and felt moved to do something about it.

In the three years that he has been helping in this parish food kitchen he has witnessed some very moving moments, events that have marked his life. Some of them due to the love he has witnessed, others on account of the suffering he has seen. Like the time when one man came up to talk to him and thanked him for all he had done for him and his children. The food kitchen had been the great consolation in the terrible despair they were suffering. But now, defeated and exhausted, he had decided to give up the struggle and take his own life. He had come to say goodbye to Tony, who desperately tried to dissuade him and give him new hope. But it was already too late, because the man had taken poison a few hours before and soon died. It was a struggle for Tony to recover his own spirits after that, but his faith and the parish priest were a great help to him.

Tony is convinced that despite the crisis and despite everything people are suffering in Venezuela, there are many good people. He sees himself as no more than a grain of mustard in this work. On the doorway of the parish of San Sebastian there is a card inviting the faithful to contribute their little “droplet of love”, as Tony and his co-workers have christened this initiative, asking everyone to contribute just a little “droplet” of whatever they have at home to this food kitchen, as their little “droplet of love” for their brothers and sisters. He speaks gratefully of Carmen, Berta and Ana, the three ladies who help him in everything, and the many others who come each lunchtime to “plate up” and serve the meals. He is grateful for the tremendous support he gets from the diocese of La Guaira and from the companies that help supply the food, or consumables, as they call them in Venezuela, companies like Teixeira Duarte, the firm that employs Tony and which is the main contributor towards this project. 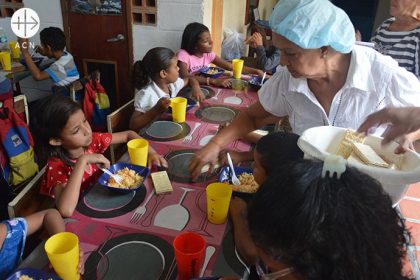 ACN has recently provided the diocese of La Guaira with 11 refrigerators and a cooker.

In the afternoon, after finishing work, Tony rests for a while, then he organises the mise en place (in chef’s parlance this means getting ready the ingredients and preparing everything for the next working session). He notes what is needed and how to obtain it. Then he gets on his old motorbike and drives to the bakery where, he “donates” a few hours – to use his own words – so that in return they will give him 10 or 15 loaves. Thinly sliced, these will provide a piece for each child next day. This is another and very important “droplet of love”, Tony insists, because bread is so expensive that there is now hardly a household that can afford it.

He returns home. It has been a long day. Tony rides home on his somewhat ageing motorbike – 10 years old by now and in need of a few repairs, but still going. Before going to bed he asks God for the strength to continue his work tomorrow and be able to help his brothers and sisters until the last day of his life.

Tony Pereira will not be getting any Michelin stars, despite the fact that each day he overcomes challenges and difficulties well worthy of such a prize; he will probably never win a cooking competition either, but there is no doubt that this chef of La Guaira is truly earning himself on a daily basis the title of Masterchef, because without question he is adding savour to the lives of so many people.

ACN International is supporting many different projects in Venezuela, helping the various dioceses to run the food kitchens that are now found in hundreds of parishes across the country. ACN has recently provided the diocese of La Guaira with 11 refrigerators and a cooker. ACN staff also recently visited several of these food kitchens, including the one in the parish of San Sebastian, where they got to know Tony, Father Martin and the group of parish volunteers. ACN supports also priests without resources and their parishes with stipends of Masses.