Living trapped in addiction is a hell, not only for the addict but also for his family and all those around him. The Fazendas – the “Farms of Hope” – seek to give an answer to this suffering. Originating in Brazil, today there are 139 Fazendas in 22 countries around the world. Analía Rodríguez is Argentinian and today she is in charge of the Fazendas in Chile, Argentina, and Uruguay. The international Catholic pastoral charity and pontifical foundation Aid to the Church in Need (ACN) has been supporting the magnificent work of the Fazendas from the beginning. In an interview for the weekly TV program “Donde Dios Llora” (Where God Weeps) she shares her heartrending story.

“We come from a very humble, very simple family. We are five brothers and sisters, together with my mother. My brother had already had other experiences of trying to overcome addiction, which were not good. Then he went to a Fazenda in Brazil and came back with a group of missionaries in order to open the first one in Argentina, in the province of Cordoba. He knew what was happening in our home, and with me especially; I was sexually abused from the age of 14 by my stepfather. I already had a child aged seven, as a result of this abuse, and I was pregnant again with another child. I thought that my life would always be like that. Then my brother came to the house and told me he had something to give me that wasn’t money, that wasn’t a house; it was something that had got him off drugs; it was God. A hope was born within me then, because the life I was living was not the life I wanted to live. And so, with the help of a priest, he got me out of that place.

When I first came to the Fazenda, I wasn’t the person I am today. I arrived there empty, without dignity, without self-esteem, without any aim or direction in life. I was in the world because there was no other one for me to live in; I had attempted suicide on several occasions. I wasn’t a drug addict or an alcoholic, but today I understand that drug addiction in people is a secondary effect, that the wounds come before the substance abuse and that every person has a different path to follow in order to survive them.

What helped me within the Fazenda was the spirituality. I knew nothing of that; I went to the Fazenda because I had to get out of my house or else die there, that was the only reason. Today I can see the path of God in my life because I didn’t know how to pray, I didn’t even know how to read properly, I only reached seventh grade in school… In the Fazenda, I saw how the young people tried to put into practice the Word of God, and this really fascinated me. For example, on Fridays, we had a “communion of souls” session, in which someone would speak about their feelings. For me, these were a very powerful experience because people would speak about the suffering they had been through. The Word inspires us to love in concrete ways, and they would say: I try to love beyond the pain… I asked myself, how can they live like that? I couldn’t manage to do it, because the pain overwhelmed me, the memories, the nightmares: why did it happen to me? These questions left me no peace.

I recall that I went to confession in the Fazenda, to a bishop who supported their work in Argentina. It was the second time I’d been to confession. I told him, “I want to get my revenge because it’s not fair, it’s not fair. I didn’t hurt anybody.” And he said to me, “There is no revenge better than love. You must forgive.” I answered, “But why should I forgive? It’s the other people who should ask forgiveness of me.” I cried all that day because I saw how much of my life I had lost. I was 26 and I had not had any adolescence I had not lived my childhood. And he said to me, “If you are here, even though you don’t understand it today, it’s because God has brought you here. He wants something good for you and you have to start loving. You have to stop asking why, or why you should be weeping. You have to start living today.” And I began to do just that. I tried hard because it was a struggle the thoughts kept invading my mind, the memories, but I remembered what that bishop had told me: live the present day. And I began to experience this, living the present day, loving, thinking kindly of others, and the desire began to grow to forgive my mother and to forgive this man who did not know what he was doing.

Life in the Fazendas is based around three pillars – spirituality, which is the fundamental aspect; then work and living together in community. Spirituality, because it helps us to come to terms with ourselves and with God, because my personal experience, like that of so many other young people, had so much caused us to lose ourselves, to lose all sense of belonging, of what we belonged to. Then afterward, the work: it gives you back your dignity, helps you know that you are useful, to begin to form new habits and know that what you eat that day is the fruit of your own labor, because you go out working in the garden, planting things, or you work in the bakery, and the bread you eat is what you have made yourself, what your family in the community eats is the fruit of your hard work. And in the communal sharing, you learn to live with yourselves and with others, which is something we never knew outside. 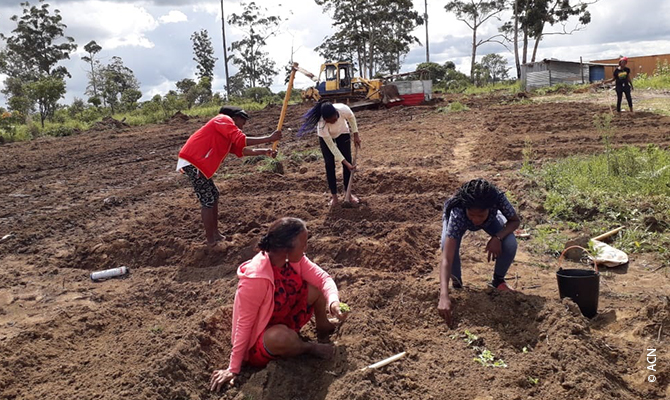 Today I understand that every person who comes is a suffering Christ, just as I was one day when I arrived. I was this Christ who was suffering and who was welcomed and loved, without asking about the suffering that lay behind. There were many other experiences like mine, and still more painful ones. When you get together, chatting and sharing your experiences while you’re working, while you’re cleaning, or cooking, you learn about all kinds of painful experiences, but the mere fact of wanting to live the present moment, to which God calls us, is what causes the miracle to happen, the miracle He desires for every single person. Only the grace of God, in the day-to-day events we are involved in, can make this possible. But He is not merely a God to read about or study, but a God whom we must live.

The journey of reconciliation calls for patience and trust. #Peace will not be obtained unless it is hoped for.