Hot Topics
Russia, China and Nuclear Arms: Interview with the Vatican Secretary of State
Chinese Communist Regime To Put on Trial Cardinal Emeritus of Hong Kong
Cardinal Jozef Tomko Died, the World’s Most Long-Lived Cardinal
After the Supreme Court’s Ruling, the State of Kansas Approved Abortion by Referendum
Pope Makes Clear What He Understands by “Synodality”: “It’s Not the Last Minute Recipe of the Church”
Pope Appoints as His Personal Health Assistant the Nurse “Who Saved His Life”
Pope Takes Up Again the General Audiences and Talks About His Trip to Canada
Pope Francis to 50,000 Young People in Medjugorje: “It’s Not Enough to Come Out of Oneself, One must Know to Whom to Go”
Bishops Evidence Sectarian Drift of U.S. Congress
Pope Francis Asks the Church to Pray for Small and Medium Businesses During August

To show its solidarity with the Lebanese people, the pontifical foundation ACN in collaboration with CNEWA / Pontifical Mission and Caritas Lebanon will reach out to local partners to be able to respond to the immediate and urgent needs for food of 5,880 families from Gemmayze in Beirut up to Dbayeh in Mount Lebanon. Some of the local partners that will cooperate in the distribution of the food packages explained the situation that they are suffering. 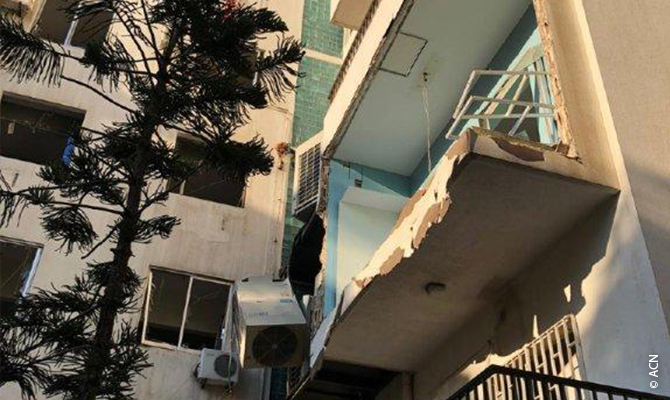 “The blast shook us’’, said Sister Rita Khoury from the Daughters of Charity, one of the congregations supported by the project. They run a dispensary for maternal and infant protection since 1959 in the coastal city of Achrafieh, Beirut, in the poor suburb of Karm el Zeitoun, where people lacked any help, providing basic medical services.

Sister Rita and a group of staff and volunteers have been since the explosion, walking the narrow streets of Karm el Zeitoun neighborhood, densely populated, trying to assess the needs and help people. ‘’The homes of our staff and all residents in the area have been damaged. The congregation’s 5 centers including 2 schools located in Achrafieh were also severely damaged and unfortunately, we lost a sister in the explosion’’.

Ashrafieh is one of the oldest districts of Beirut with thousands of old structures. Just 2kms away from Beirut port, buildings and houses were damaged with windows and doors shattered, furniture and equipment destroyed. North of Ashrafieh are also two poor areas which had their share of damages; Bourj Hammoud and Nabaa, that are heavily populated by deprived Lebanese, vulnerable refugees, and marginalized migrant workers and where ACN’s project partner CNEWA/Pontifical Mission supports two Church-related dispensaries; Karagheusian socio-medical center and Socio-medical intercommunity dispensary which provide medical and social aid to more than 7,000 needy people. The Karagheusian center will also benefit from the emergency aid.

“Thank God that the explosion happened at 6:00 pm. If it happened 3 hours earlier, our patients, me, and my staff would have been dead by now! We welcomed 250 patients in the morning with a team of 50 staff members. I cannot imagine what would have been the situation then.  The center is badly damaged. My office is completely destroyed, we lost 25 windows, 15 doors, false ceiling, several laptops, a photocopy machine, etc….” said Serop Ohanian the Karagheusian socio-medical center’s director. 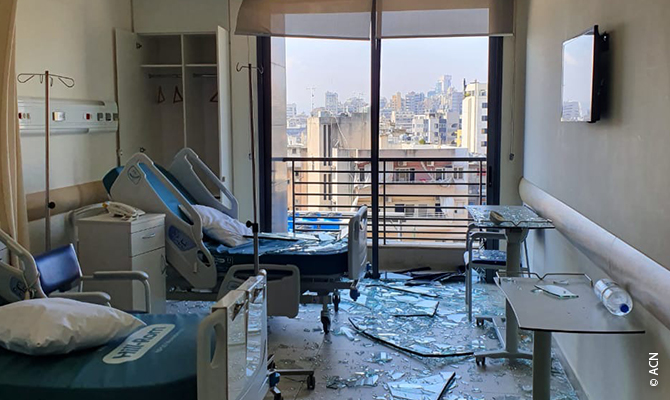 “Throughout the 15 years of civil war, we had never witnessed such destruction at one glance. No house, no shop, no institution was spared from damages” said Sister Marie Justine el Osta from the Maronite Holy Family Sisters congregation, and the director of the Socio-medical intercommunity dispensary. The dispensary will be one of the distributors of the food packages. It is located in Nabaa area, known to be a poor district of East Beirut with mixed communities, predominantly Christians displaced from Mount Lebanon and other parts of the country during the civil war in addition to a large number of foreign workers (Syrian, Egyptian, Iraqi, Sri-Lankan, Philippino, etc.) seeking shelter in cheap small lodging rentals.

“Even three of our staff had their share of injuries while they were in their homes. The dispensary is scattered, almost all the windows of the dispensary are broken, wood doors and even steel doors are damaged. Hundreds of homes in the vicinity of the center have seen damaged. They are the homes of our patients and people who are poor and come seeking medical support, food, and clothing. They cannot repair whatever has been broken from glass especially with the current economic and financial crisis in the country. Thank God that the weather is good now but a few months from now we might have rain and then it will be a catastrophe. These people urgently need support as they cannot do the repairs on their own and above all are without work, money, and food”, said Sister Marie Justine.

The populations of Somalia and various zones of the neighbouring countries, who already live in very precarious conditions, now find themselves in mortal danger due to drought. I hope that international solidarity can respond effectively to this emergency. #PrayTogether