(ZENIT News / Vatican City, 04.12.2022).- On Thursday morning, December 1, Pope Francis received in special audience the members of the “Joseph Ratzinger – Benedict XVI Vatican Foundation,” for the awarding of the 2022 “Ratzinger Prize,” which has reached its twelfth edition. The audience and awarding was held in the Clementine Hall of the Apostolic Palace. As we reported elsewhere, the winners of the 2022 Ratzinger Prize are Professors Michel Fédou and Joseph Halevi Horowitz Weiler.

After the  greeting of Father Federico Lombardi, S.J., President of the Foundation, the presentation was made of the profile of the winners by His Eminence Cardinal Gianfranco Ravasi. Then Pope Francis conferred the Prize and gave his address, expressing himself affectionately about the Pope Emeritus Benedict XVI.

Here is his address, translated into English by the Holy See, with phrases in bold added by ZENIT.

I extend a warm welcome to all of you. I thank Cardinal Ravasi and Father Lombardi for their words of introduction and for presenting the recipients of the Ratzinger Prize. I offer a cordial greeting to Father Michel Fédou and Professor Joseph Halevi Horowitz Weiler.

I am pleased to preside over the award ceremony again this year.  As you know, I have many opportunities for a personal, fraternal and affectionate encounter with the Pope Emeritus. All of us sense his spiritual presence, his accompaniment in prayer for the whole Church and his constant contemplative gaze. This occasion represents an important opportunity to reaffirm that his theological work and, more generally, his thinking and insights continue to be fruitful and effective. 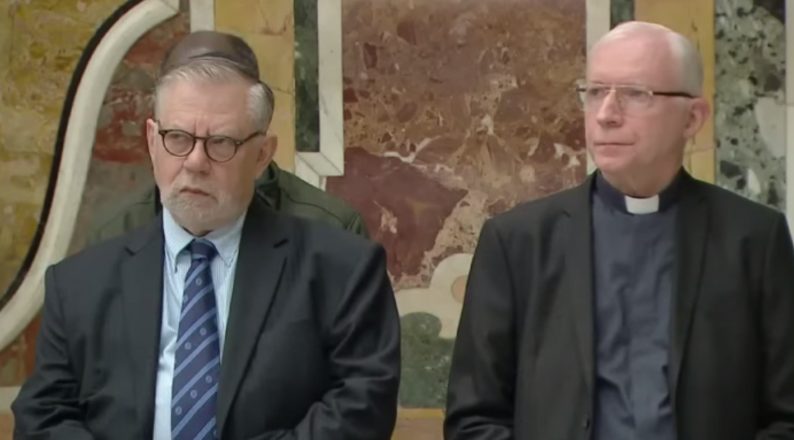 Recently we commemorated the sixtieth anniversary of the opening of the Second Vatican Council. As we know, Benedict XVI personally participated as an expert and played an important role in the genesis of some of its documents. Afterwards, he was called to guide the ecclesial community in its implementation, both at the side of Saint John Paul II and then as Pastor of the universal Church. Pope Benedict helped us to interpret the conciliar documents in depth by proposing a “hermeneutic of reform and continuity.” Even most recently, he sought to stress how the Council continues to exercise its crucial function, since it provides us with the necessary guidelines for reformulating the central question of the nature and mission of the Church in our time (cf. Message for the 10th International Symposium of the Ratzinger Foundation, October 7, 2022).

In addition to the papal magisterium of Pope Benedict, his theological contributions are offered anew for our consideration thanks to the publication of the Opera Omnia, the German edition of which is now nearing completion, while the editions in other languages continue to progress. These contributions offer a solid theological basis for the Church’s journey: the journey of a “living” Church, which he taught us to see and experience as communion, on its way — in a “synod” — guided by the Spirit of the Lord and constantly open to the mission of preaching the Gospel and serving the world in which she lives (cf. Homily for the Inauguration of the Pontificate, 24 April 2005; Final General Audience, 27 February 2013).

The service provided by the Joseph Ratzinger – Benedict XVI Vatican Foundation is inspired by the conviction that his magisterium and thought are not directed towards the past, but are fruitful for the future, for the implementation of the Council and for dialogue between the Church and today’s world. This includes such timely and much-debated fields as integral ecology, human rights and the encounter between different cultures. I take this opportunity also to encourage cooperation between the Vatican Foundations named after Blessed John Paul I and Saint John Paul II, so that the memory and the vitality of the message of these three Popes will be promoted concordantly within the ecclesial community.

Today we gather to recognize two individuals outstanding for notable work in their respective fields of study and teaching.  While the two fields are different, both were cultivated by Joseph Ratzinger and considered by him to be of vital importance. 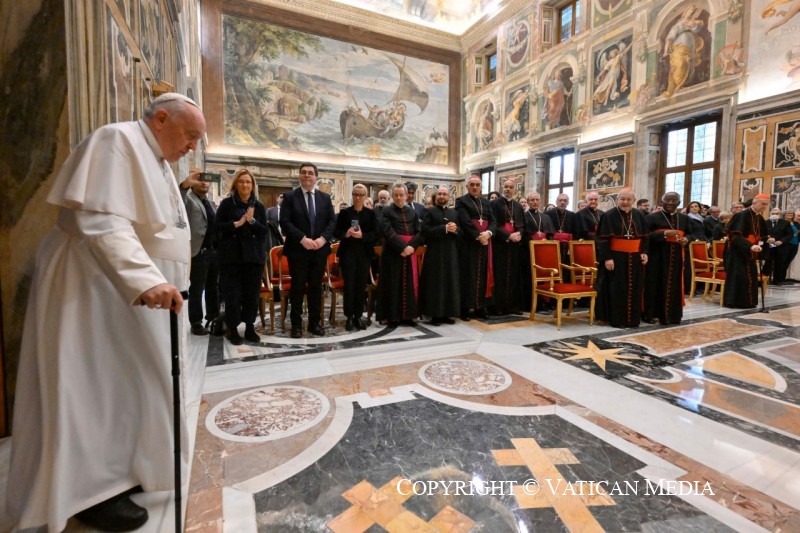 Father Michel Fédou — as we heard from the presentation — is a master of Christian theology. His life has been devoted to study and teaching, with special emphasis on the works of the Fathers of the Eastern and Western Churches, and on the development of Christology over the centuries. Yet his focus has not remained on the past. Knowledge of the tradition of faith enabled him to develop a creative line of thought that was also able to address current issues in the field of ecumenism and relations with other religions. In him, we acknowledge and admire a worthy heir to the great tradition of French theology that gave the Church pioneers of the stature of Father Henri De Lubac and impressive and courageous cultural contributions such as the Sources Chrétiennes, whose publication began eighty years ago. Without the contribution of this French theology, the richness, depth and breadth of reflection nurtured by the Second Vatican Council would not have been possible, and we must hope and pray that it will continue to bear fruit for the Council’s ongoing implementation.

Professor Weiler is the first person of the Jewish faith to be awarded the Ratzinger Prize, which until now had been awarded to scholars belonging to various Christian denominations. I am very happy about this.  At a difficult moment, when it was being called into question, Pope Benedict stated with determination and pride that “from the very beginning, an objective of [his] personal theological work had been the sharing and promotion of all the steps of reconciliation between Christians and Jews made since the Council” (Letter to the Bishops of the Catholic Church, 10 March 2009). Many were the occasions when he pursued this goal during his pontificate; there is no need to enumerate them here.  For my part, I have continued along the same lines, taking further steps, in the spirit of dialogue and friendship with the Jewish community that was always a concern of mine during my ministry in Argentina.

The convergence between the Pope Emeritus and Professor Weiler can be seen in specific topics of significant import. These include the relationship between faith and legal reasoning in the contemporary world; the crisis of juridical positivism and the conflicts generated by an unlimited extension of individual rights; and the right understanding of the exercise of religious freedom in a culture that tends to relegate religion to the private sphere.  Pope Benedict has always considered such themes central to the dialogue of faith with contemporary society. Professor Weiler has not only conducted in-depth studies on them, but has also taken courageous positions, moving, when necessary, from the academic level to that of discussion — and we could say of “discernment” — for the search for consensus on fundamental values and the resolution of conflicts for sake of the common good. That Jewish and Christian believers can find themselves united in this effort is a most hopeful sign.

These awards, then, in addition to representing a well-deserved recognition, call our attention to significant lines of commitment, study and life that prompt our admiration and are worthy of everyone’s attention.

Once again, I offer my congratulations to the distinguished recipients of this Award, and my good wishes for their continued work. I cordially invoke the Lord’s blessing upon them, upon their family and friends, upon the members and supporters of the Ratzinger Foundation, and upon all present. And I ask you, please, to pray for me. Thank you.

Translation of the Italian original into English by the Holy See.