(ZENIT News / Vatican City, o4.12.2022).- At least 25,000 people gathered in Saint Peter’s Square at midday on Sunday, December 4 to listen to the Pontiff, to pray the Angelus with him, and to receive his Sunday greetings. Liturgically, it was the Second Sunday of Advent, so the Pope reflected further on the Gospel of that day

Here is the text of the Holy Father’s second Advent meditation.

Today, the Second Sunday of Advent, the Gospel for the Liturgy presents the figure of John the Baptist. The text says that John “wore a garment of camel’s hair,” that “his food was locusts and wild honey” (Matthew 3:4), and that he was inviting everyone to conversion. And he was saying this: “Repent, for the Kingdom of Heaven is at hand!” (v. 2) And he was preaching the nearness of the Kingdom. In short, he was an austere and radical man, who at first sight might appear to be harsh and could instil a certain fear. But then again, we can ask ourselves why the Church proposes him each year as our primary traveling companion during this Season of Advent. What is hidden underneath his severity, behind his apparent harshness? What is John’s secret? What is the message the Church gives us today with John?

In reality, the Baptist, more than being a harsh man, is a man who is allergic to duplicity. Listen well to this: allergic to duplicity. For example, when the Pharisees and Sadducees, who were known for their hypocrisy, approach him, his “allergic reaction” is quite strong! In fact, some of them probably went to him out of curiosity or to gain something because John had become quite popular. These Pharisees and Sadducees believed they had it all together and, faced with the Baptist’s blunt appeal, justified themselves, saying: “We have Abraham as our father” (v. 9). Thus, because of their  duplicity and presumption, they did not welcome the moment of grace, the opportunity to begin a new life. They were closed in the presumption of being right. So, John tells them, “Bear fruit in keeping with repentance!” (v. 8) This is a cry of love, like the cry of a father who sees his son ruining himself and says to him, “Don’t throw your life away!” 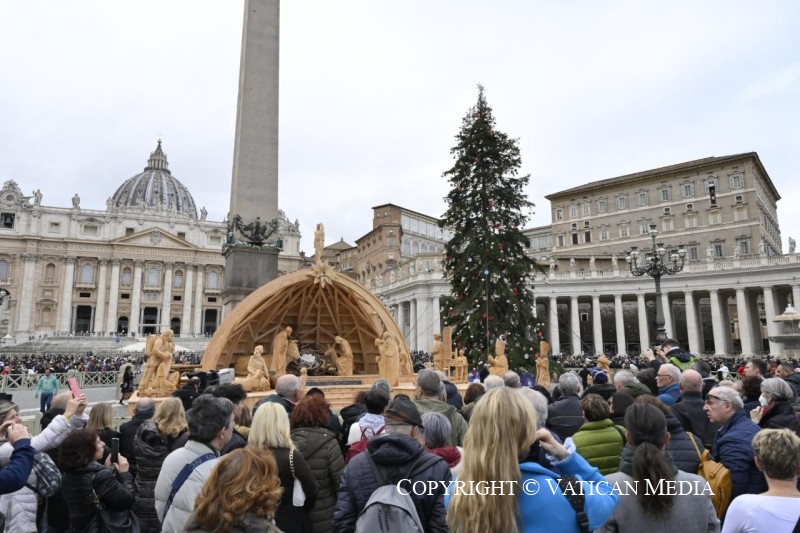 In essence, dear brothers and sisters, hypocrisy is the greatest danger because it can even ruin the most sacred realities. Hypocrisy is a serious danger. This is why the Baptist — as Jesus would be later — is harsh with hypocrites. We can read, for example, the 23rd chapter of Matthew where Jesus speaks really strongly to the hypocrites of that time. And why do the Baptist as well as Jesus do this? To shake them up.

Instead, those who sensed they were sinners went “out to him [John], and they were baptized by him, confessing their sins” (v. 5). Therefore, bravura is not important to welcome God, humility is. This is the path to welcome God. Not bravura — “We’re strong, We are great people!” No, no. Humility. I am a sinner. But not in the abstract, no — “because of this and this and this”. Each of us needs to confess our own sins, our own failings, our own hypocrisy. It requires getting off the pedestal and being immersed in the water of repentance. 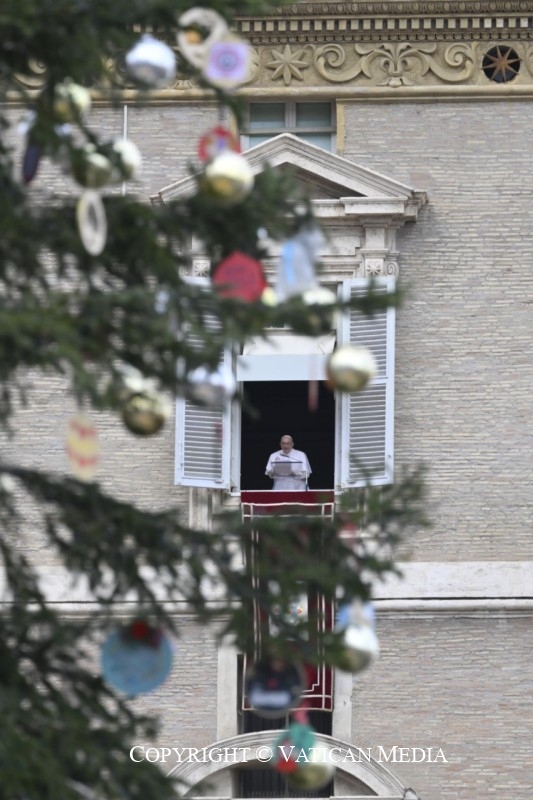 Dear brothers and sisters, John and his “allergic reactions” make us think. Are we not at times a bit like those Pharisees? Perhaps we look at others from top to bottom, thinking that we are better than them, that we have our lives under control, that we don’t need God, or the Church, or our brothers or sisters on a daily basis. We forget that in only one case is it legitimate to look down on someone else: when it is necessary to help them get up. This is the only case; the others are not legitimate.

Advent is a moment of grace to take off our masks — every one of us has them — and line up with those who are humble, to be liberated from the presumption of the belief of being self-sufficient, to go to confess our sins, the hidden ones, and to welcome God’s pardon, to ask forgiveness from those whom we have offended. This is how to begin a new life. There is only one way, the way of humility — to be purified from the sense of superiority, from formalism and hypocrisy, to see ourselves, along with our brothers and sisters, as sinners, and to see Jesus as the Saviour who comes for us, not for the others, for us, just as we are, with our poverty, misery and failings, above all with our need to be raised up, forgiven and saved.

And let us remember one thing: with Jesus, there is always the possibility of beginning again. It’s never too late. There is always the possibility to begin again. Be courageous. He is near to us and this is the time of conversion. Everyone might think: “I have this situation inside, this problem that I am ashamed of.” But Jesus is next to you. Begin again. There is always the possibility of taking a step forward. He is waiting for us and never gets tired of us. He never gets tired! And we are annoying, but He never gets tired! Let us listen to John the Baptist’s appeal to return to God. And let us not let this Advent go by like days on the calendar because this is a moment of grace, a grace for us too, here and now! May Mary, the humble servant of the Lord, help us to meet Him, Jesus, and our brothers and sisters on the way of humility, which is the only one that will help us go ahead.