(ZENIT News / Rome, 06.12.2022).- As a result of the accusations of abuse against the renowned priest of the Society of Jesus, Slovenian Father Mark Ivan Rupnik, the Jesuits’ Delegation in Rome issued a press release in which, in addition to offering more context, make known some additional aspects, such as the measures applied to the known artist.

Here is a translation into English of the press release.

In 2021 the Dicastery for the Doctrine of the Faith (DDF) received a complaint against Father Mark Ivan Rupnik, S.J., regarding his way of exercising the ministry. No minors were involved. The DDF requested the Society of Jesus to initiate a preliminary investigation on the case. The Society of Jesus appointed immediately an external investigator (A Religious of another Institute) for the investigation. Several individuals were asked to give a statement. The Final Report was presented to the DDF. After studying the result of the investigation, the DDF concluded that the statute of limitation had lapsed in regard to the events in question, hence, it filed the case at the beginning of October of this year.

However, several cautionary measures were adopted against Father Rupnik in the course of the preliminary investigation: he was prohibited from carrying out the Sacrament of Confession, from giving spiritual direction and spiritual exercises of accompaniment. In addition, Father Rupnik was prohibited from taking part in public activities without the permission of his local Superior. These measures are still in force today, as administrative measures, including after the response of the Dicastery for the Doctrine of the Faith. 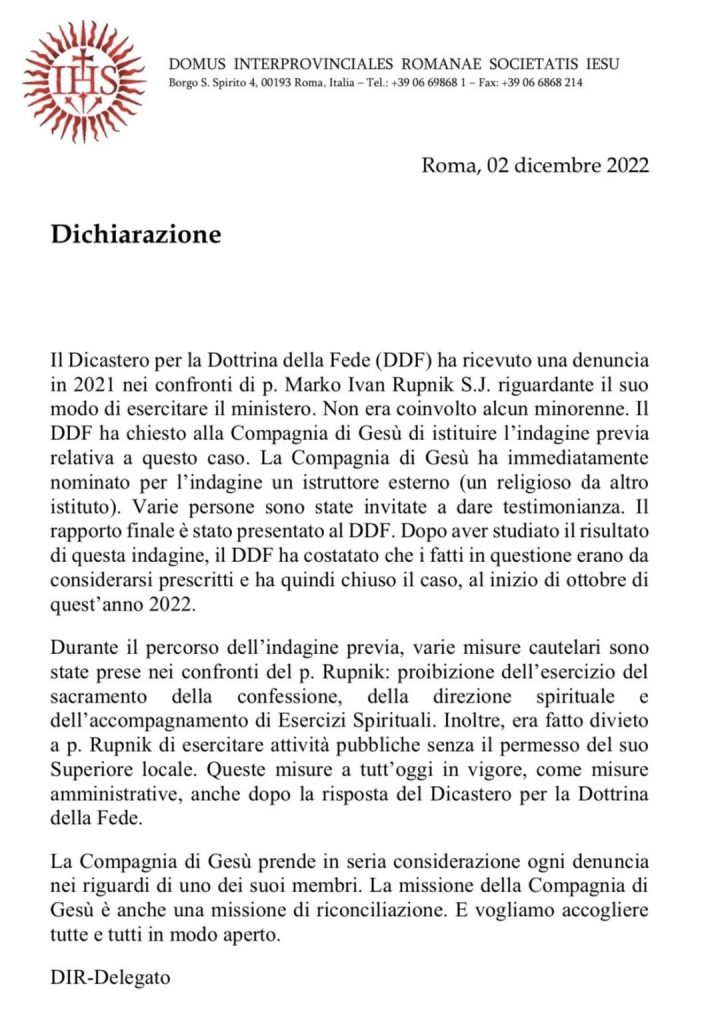