Marco Mencaglia, head of the Latin America section of Aid to the Church in Need, visited Nicaragua in November. The objective of his trip was to learn more about conditions in the country first-hand and to assess how the pontifical foundation has worked with the local church up until this point and how they can continue to work together.
Last year, Nicaragua experienced a series of intensive and violent clashes between the government and opposition groups that lasted for about three months from April 18 to mid-July. During this period, the clashes claimed hundreds of lives – most of them young protesters. However, the exact number of victims is disputed: the government has estimated 150 dead, other sources say the figure is over 500.
The Catholic Church played a decisive role in ensuring that the clashes between the armed government forces and the protesters – most of them students – did not cause even more casualties, both dead and wounded.
“One of the things that the Nicaraguan Church has said time and again is that the only way out of the crisis is through dialogue and by supporting a process that guarantees legal certainty, and channels the energy of young people for the good of the country. It is important to avoid starting new conflicts and to involve all of the relevant social actors in the country,” Mencaglia said in an interview after he returned from his visit to the Central American country. “I would even go so far as to say that there is no peaceful way out of the current situation without the involvement of the Church. At a spiritual and social level, the Church continues to play a decisive and unique role in Nicaragua as it moves along the difficult path to healing the deep wounds left by the conflict that raged from April to July.”
Mencaglia also addressed the difficult situation that young Catholics face. He was often told during his visit, “Young and Catholic is a dangerous thing to be in Nicaragua today.”
The following is a transcript of the interview:
What is the current situation in Nicaragua?
Although officially, there have not been any further violent clashes since July, the political climate in the country remains extremely tense. At this time, the fate of the young people has yet to be decided. Hundreds of them are still incarcerated in prison for political reasons relating to the suppression of the protests. Less blatant forms of discrimination also have a negative impact on life in the country. 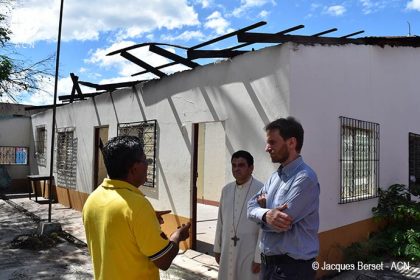 Marco Mencaglia, head of the Latin America section of Aid to the Church in Need, visited Nicaragua in November.

What role did the Catholic Church play during this time?
Many people deplore the absence of the basic requirements for democracy. The Catholic Church is playing a decisive role in finding a peaceful solution for the conflict because it is an institution that is deeply rooted in society.
After the first protests, the government asked the Church to play a mediating role. However, the dialogue was aborted by the government after eight meetings. A fierce campaign was initiated by government circles to discredit the Catholic Church. Strong allegations were made against Church leaders and the Catholics were called “putschists” and “terrorists”. At the same time, measures were taken to keep tabs on everything the priests said and did. Thus, for example, the content of Sunday sermons is monitored closely and passed on to the government by agents. In addition, it is said that concrete and in part violent measures are being taken at a local level to discriminate against persons who are suspected of having provided some form of material support for the protests, even if they were not directly involved in the clashes. Over the course of our visit, one sentence came up again and again: “Young and Catholic is a dangerous thing to be in Nicaragua today.”
What impressed you most during your trip?
The courage of the Church as it worked to prevent even more violence during the months of conflict. The protest organizers closed off the main roads in many regions of the country, bringing life to a standstill in the country for weeks. We saw many photos showing priests in, particularly tense situations, standing with arms raised between armed government forces who were about to take down blockades by force, and protesters who had resolved to show resistance. By risking their own lives, these priests, most of them young men, saved the lives of many young people on both sides of the conflict. They prevented the street blockades from ending in violence. Many of the churches took in hundreds of wounded, converting church buildings into makeshift field hospitals.
In spite of the campaign to discredit the Church, recent, independent surveys have shown that the Church as an institution continues to enjoy a very high level of credibility. The number of vocations to the priesthood continues to rise practically everywhere in the country. Each year, new parishes are founded in different dioceses. Others are adding to the number of centers for lay education. The number of applications received from people interested in taking part in educational courses offered by the Church is also growing. The last diocese to be founded in Central America is located in Nicaragua: the diocese of Siuna, established in late 2017. 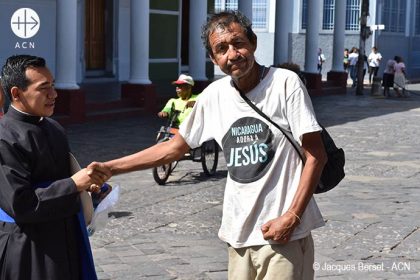 Mgr Jorge Solórzano Pérez, Bishop of Granada, during the distribution of a meal for the poor of the city – Poor man wearing a T-Shirt with the slogan “Nicaragua loves Jesus”.

Is there a way out of the crisis?
The Nicaraguan Church has said time and again that the only way out of the crisis is through dialogue and by supporting a process that ensures that the fundamental rules of democracy – free and fair elections – are respected, and that channels the energy of young people for the good of the country. It is important to avoid starting new conflicts and to involve all of the relevant social actors in the country. I would even go so far as to say that there is no peaceful way out of the current situation without the involvement of the Church. At a spiritual and social level, the Church continues to play a decisive and unique role in Nicaragua as it moves along the difficult path to healing the deep wounds left by the conflict that raged from April to July.
What does the Nicaraguan Church need?
First of all, the local Church has to remain unified. In spite of the great differences in personal biographies, attitudes and pastoral contexts, the bishops have always been able to show a remarkable solidarity with one another. It is necessary to pray for the people who have distanced themselves from the Church for political reasons, that they may return to the community of the Church. These are difficult processes that quietly continue to move forward in spite of the many problems. During these precarious times, the Nicaraguan Church needs to feel the solidarity of the world Church in prayer and its ongoing attention. 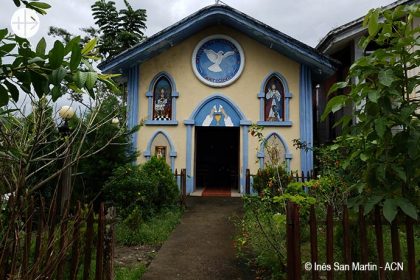 What help can ACN provide through the involvement of its benefactors?
In response to the remarkable increase in vocations, beginning in 2019 the Church in Nicaragua has decided to set up new philosophical seminaries for candidates to the priesthood at a regional level. These will be in addition to the existing diocesan seminaries in Managua and Granada as well as the national seminary in Managua, where students from the five other state districts can continue their theological studies. The new, improvised seminaries will need worthy facilities to be able to accommodate the young students.
Furthermore, ACN is assisting in the process of founding new parishes in various dioceses of the country by building small churches and parish houses. These are being built in isolated areas and the communities are happy to finally have a priest living among them. Quite often we have witnessed how the presence of a priest can change the life in a village in Nicaragua: in addition to his liturgical and sacramental duties, the priest is often a point of orientation in the day-to-day life of the entire community.
ACN also offers support for the formation of young lay people. As we mentioned above, during the protests young Catholics became the targets of the most severe attacks. They were robbed of their rights, threatened, thrown into prison and beaten. Many of them fled the country to seek refuge abroad. Many others lost their jobs because of the economic crisis and have no prospects for the future. We have to reach out to these young people so that their wounds can heal and they can discover the love of God in spite of all their suffering and anger.