Hot Topics
One Out of Every Four Countries Worldwide Used Force to Impede Religious Practice During the Pandemic
The United States Deputy Secretary of State Will Visit the Vatican
Pope Francis closes 2022 with this intention for which he asks the whole Church to pray
USA: Bishop Barron responds to LGBT bill passed by Senate
Pope Francis: New date confirmed for historic Ecumenical Peace Pilgrimage to South Sudan adn Congo
Half a Million Catholics at Risk of Imminent Schism Due to the Liturgy
Who Are Qatar’s Christians? They Are More than 13% of the Population, but Without Full Religious Liberty
Jesuit Resigns from Vatican Secretariat for the Economy and Is Succeeded by a Spanish Layman
Russia Accuses Pope of Russophobia after His Statements to a Jesuit Magazine
China’s Response to the Holy See’s Protest: “China Is Prepared to Work with the Vatican”

The number of people who have died as a result of the terrorist attacks of November 15, 2019, on the Cathedral of the Sacred Heart in the diocese of Alindao and on the  camp right next to it, continues to grow, and has now reached more than 80, according to information given to the international Catholic pastoral charity and pontifical foundation Aid to the Church in Need (ACN). What is the reason behind this sudden upsurge in violence against Christians in the south of the Central African Republic? In the report below the local Church analyzes the situation and explains the consequences of these terrible events.
“The people, who almost all fled into the forest, are now returning, hoping to be able to find a few grains of rice that they can eat and foraging among the ashes for any beans that have been only partially burnt”, said Bishop Cyr-Nestor Yapaupa of Alindao, describing the dramatic scenes in his town. Those who have died since the attack includes two priests and two Protestant pastors, according to hospital sources.
A local Church source reports that the refugee camp, which once sheltered some 26,000 people and was supervised by the priests of the diocese, has now been totally destroyed. “The old people and the handicapped were simply burned alive if they were not already shot dead or beheaded,” Bishop Yapaupa added. “In their panic, many parents were forced to leave one or other of their children behind in order to save the others. The attackers simply fired indiscriminately on the people.” Quite apart from the loss of human life, “the fire tore through the reception center and several of the Church buildings. The cathedral lost its roof. The terrorists stole cars, motorcycles, solar panels, food from the storeroom, money, and fuel…” 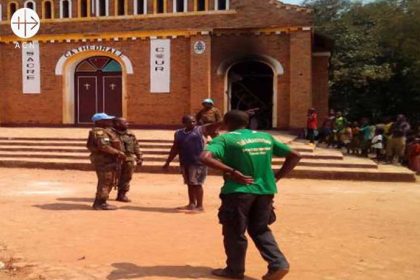 The cathedral of Alindao after the massacre.

A country torn apart
At present, there are more than 14 different armed groups scattered across the Central African Republic. The president of the country, Faustin Touadéra, does not have the resources to control the activities of these groups, the remnants of the civil war initiated in 2013, and which dissolved into clashes between the Seleka rebels – an almost entirely Muslim coalition – and the so-called “anti-balaka,” initially a self defence militia (a contraction of the phrase “anti-balas AK-47”, or “anti-bullets AK-47”) which ultimately degenerated into gangs of animist or nominally ‘Christian’ youths.
The authors of this particular terrorist attack were a Muslim militia, an offshoot of the Seleka, ironically named “Unity and Peace in Central Africa” (UPC). So why have the tensions suddenly increased just here in Alindao?
Alindao, “a cow to be milked”
According to the UPC, this was a legitimate act of defense because the Anti-balaka in Alindao had killed two Muslims on November 14 and 15. However, our source informed us that it was rather the desire to compensate for a lack of means on the part of the UPC, which saw Alindao as “a flourishing commercial center, and a cow to be milked.” After being expelled from Bambari in October, the UPC was forced to abandon its local commercial support base and the gold and diamond mines it controlled. “The weekly collections extorted from local traders in order to feed their troops” had led to big protests, and so they had had to go in search of another source of income, “Alindao and its war booty.”
The Church as a target
“Organized and structured as she is, the Catholic Church plays a fundamental role in responding to the local humanitarian crisis,” the bishop explained. The Church maintains relations with the humanitarian agencies, with the president and the UN mission MINUSCA. At the same time, however, she is an “object of covetousness” and an institution that the men of war would like to bring down. Was this the reason for the inaction of the Mauritanian UN forces during the terrorist attack on Alindao, who “in this way smoothed the path for the attackers by not fulfilling their mission of protecting the refugee population?” Our source also provided a further piece of information, explaining that “two days before the tragedy, the leader of the UPC was received by the Mauritanian contingent.” The diocese sees this meeting as having been possibly one of “consensual planning”, or outright collusion. The leaders of the three main faith communities in the Central African Republic – Cardinal Nzapalainga, Pastor Guerekoyame Gbangou, and Iman Omar Kobine Layama – have called for an investigation by the international community. 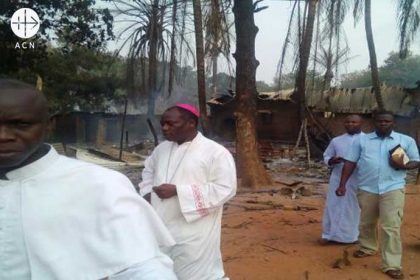 “We have lost everything, except our faith.”
“We have lost everything, except our faith,” Bishop Yapaupa concluded. “We can still look into the eyes of our enemy and offer him our sincere pardon, without giving way to a spirit of vengeance or fear.” ACN is proposing an emergency aid for the diocese of 45,000 US dollars, to help rebuild the community, and also Mass stipends to help the local clergy in this situation of total desolation.

Let us hear directed to us John’s cry of love to return to God. And let us not let this Advent go by like days on the calendar because this is a moment of grace for us, here and now! #GospelOFTheDay (Mt 3:1-12)