On January 27, 2019, two bombs exploded inside the Jolo cathedral in the Sulu archipelago,  situated between the islands of between Mindanao and Borneo. The attack killed 23 people and injured 112 others. On January 30, there was a grenade attack on a mosque in Zamboanga, west of Mindanao Island. Fr.Sebastiano D’Ambra, a missionary of the Pontifical Institute of Foreign Missions (PIME) has been working for inter-religious dialogue in the Philippines for 40 years. In an interview with the pontifical foundation Aid to the Church in Need (ACN ), he talks about the situation in the country with the greatest number of Catholics in Asia.
ACN Father D’Ambra, can you tell us what happened on January 27?
Father D’Ambra: We were naturally shocked by the violence of the attack and by the fact that it targeted a sacred place. Unfortunately, this act of violence took place in a context of growing tensions in the area. In recent years, Islamic radicalism has been on the rise. And the Christian minority on the island of Jolo (1% of the total population of 120,000 inhabitants) is not the only victims; there are also Muslims who tell me: “Father, we too are threatened because we are not the same kind of Muslims as they are.” 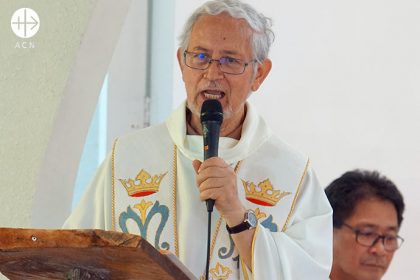 Fr. Sebastiano D’Ambra during the homily at a mass.

ACN: Three days after the attack on the cathedral, a grenade claimed two lives at a mosque in Zamboanga, in the southern Philippines where you work. Are you afraid of interreligious violence?
Father D’Ambra: I do not think we should see a connection between the two attacks. I cannot imagine Christians wishing to avenge their dead by attacking a Muslim place of worship. On the other hand, I do believe that this is once again the work of those extremist groups whose violence is on the increase and who are sowing confusion. They want to divide Christians and Muslims and take advantage of the situation to provoke chaos throughout the country and challenge its balance; a balance that is largely based on harmonious relations between believers of different religions.
ACN: However, according to the authorities, the war against Islamic terrorism is being won. Do you share this assertion?
Father D’Ambra: No, not at all. Unfortunately, interreligious tension is present. The fact that the heads of extremist groups have been executed does not mean that the Philippine Government is winning the war, that is a mistake. I know that the Army is doing what it can to control these groups, but I do not think that’s enough. Groups such as Daesh, Maute or Abu Sayyaf share the goal of causing trouble in the country and may gain more strength in the times to come. I don’t say we have to live in fear, but we have to be realistic, and I don’t see them defeated. I believe they will continue to test the friendship we have with our Muslim neighbors. 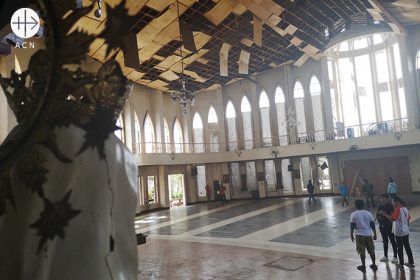 On the morning of January 27, 2019, two bombs exploded at the Roman Catholic Cathedral of Our Lady of Mount Carmel in Jolo, Sulu, in the Philippines.

ACN: And you, do you have the feeling that your life is in danger?
Father D’Ambra: Oh, I know that I’ve been living here for 40 forty years, so I’ve had a lot of time to be a target; I’d say many times. Once, especially when I was ambushed, and the bullet intended for me killed one of my friends. At that time, I was mediating with the Muslim rebels. The fact that a priest was among those groups for almost three years was an unusual experience. We had managed to establish a relationship of mutual respect and I suppose that the idea that one priest alone could be more effective than a thousand soldiers in making peace must have surprised those who did not want the end of the conflict. This attitude is repeated today. Some Muslims tell us that our programs for dialog between Christians and Muslims are not to the liking of extremists.
ACN: Would you like to leave a message to finish?
Father D’Ambra:  Don’t be afraid! Believe me, love is stronger than hate. I thank ACN for being so close to Christians in difficulty in the world, and I ask all Christians to promote dialog in their own sphere in order to get out of the logic of conflict.