A priest in Mozambique has given a graphic account of the devastating impact of the cyclone amid reports that up to 1,000 people have been killed.
Speaking in an interview with Catholic charity Aid to the Church in Need, Father Sandro Faedi, apostolic administrator of Tete, described how people cried for help as the flood waters came towards them. The priest’s personal testimony comes as ACN revealed that it is working with the local Church in the port city of Beira to provide essential aid. 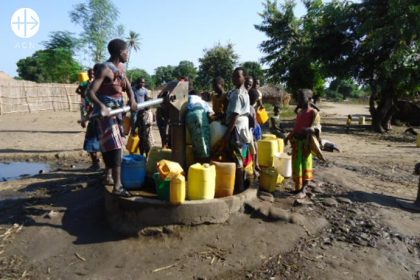 Women and children getting water at a water pump.

Father Faedi told the charity: “Beira is no longer a city. It has been destroyed almost entirely.” He continued: “From the airplanes, the city presents itself as a large lake, from which emerge buildings without ceilings. “You don’t see streets, houses, fields. A lot of people have lost their lives. “Above the houses or above the trees, [many people were] asking for help, which nobody heard. “They were carried away by the fury of the rivers entering the city.”
Father Faedi told ACN that the region, which is now mostly under water, has “no telephone, communications and no drinking water”, as 125 mile per hour winds, heavy rains and flooded rivers continue to destroy the country’s infrastructure.
With the death toll expecting to rise, he said: “For now, we only pray, ready to give our contribution when the time comes.” The priest’s comments come as Pope Francis expressed his “pain and closeness to those dear people”. 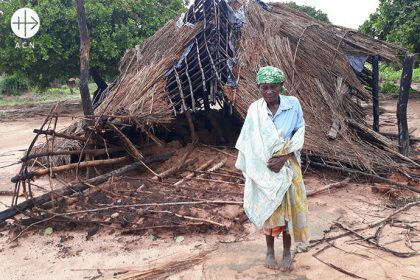 Construction of Chapels destroyed by the cyclone in January 2018, Parish of “Nossa Senhora da Assunção”, Netia-Natete.

On Wednesday, 20th March, Mozambique starts three days of mourning for the victims. Floods and winds flattened Beira, an ‘economic lung’ of Mozambique, before moving to Malawi and Zimbabwe, affecting more than 2.5 million people.
Archbishop Claudio Dalla Zuanna of Beira told ACN: “The help from ACN will be useful because it will serve to revive the ecclesial presence by confronting immediate expenses such as the acquisition and distribution of plastic tarpaulins, material, etc. (buckets, glasses, plates, etc.) and the logistics for transport. “Once again we thank you for your generosity and we will keep you informed.”

I thank you most heartily for the welcome I received in Cyprus and Greece. Thanks to everyone who collaborated in this #ApostolicJourney! Efcharistó! I will carry you in my memory and in my prayers.