Great sadness and dismay were expressed by the international Catholic pastoral charity and pontifical foundation Aid to the Church in Need (ACN International) at the murder of the 18-year-old Nigerian seminarian, Michael Nnadi on Saturday. He had been abducted by unidentified assailants, along with three other seminarians, on 8 January this year from the Good Shepherd Seminary in Kaduna in northern Nigeria. Whereas his three fellow students were all eventually able to regain their freedom, Michael Nnadi was sadly found dead on Saturday, January 31, 2020. 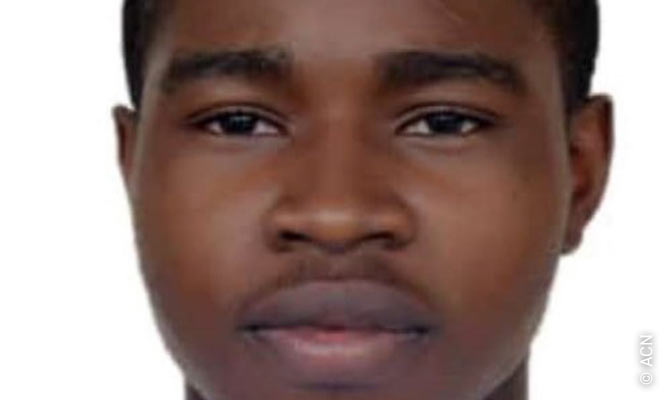 The 18-year-old Nigerian seminarian, Michael Nnadi.“With a very heavy heart, I wish to inform you that our dear son, Michael was murdered by the bandits on a date we cannot confirm. He and the wife of a doctor were arbitrarily separated from the group and killed. The Rector identified the corpse this afternoon,” Bishop Matthew Hassan Kukah of Sokoto, Nigeria, said in a statement released on Feb. 1. According to local media, the other murdered person was the wife of a doctor living in Kaduna. She had apparently also been abducted, along with her two children, by armed men on 24 January this year.

“I am appalled at the unleashing of such terrible evil”, commented Dr Thomas Heine Geldern, the executive president of ACN. “The news of the brutal murder of this innocent young man saddens me deeply”, he continued.

According to Dr Heine Geldern, the local Catholic communities are demonstrating an admirable degree of faith and trust in God, as evidenced by the final words of Bishop Kukah‘s message: “The Lord knows best. Let us remain strong and pray for the repose of his soul.” For the ACN president the task of ACN must be to support and sustain the Nigerian Church on its Way of the Cross, by means of prayer and practical help.

“But at the same time, the world needs to wake up. The Nigerian government is facing an enormous challenge. The insecurity is as bad as in times of civil war. Nigeria is a multifaith and multi-ethnic nation, and security must be provided for all”, Dr Heine Geldern insisted.

“His only crime was his desire to serve God”

One of the teaching staff at the seminary in Kaduna, who asked not to be named, told ACN:  “Michael was a young and gifted seminarian. He was an orphan who had been brought up by his grandmother. Just a few weeks ago, after a year of spiritual preparation, he had been clothed in the soutane. It seems that his only crime was his desire to serve God. The security forces and the government have failed him.”

Two of the three seminarians abducted together with Michael had been released on 31 January. Two weeks ago, another of the seminarians had been found, badly wounded, lying by the side of the highway.

Kidnappings of this kind are a regular occurrence in the state of Kaduna. According to the Council on Foreign Relations (CFR), an independent American organization, no fewer than 114 people were abducted in Kaduna state in January this year alone – the highest figure in any part of Nigeria.