This article is not a test but it begins with a question: what is the community hardest hit by the coronavirus pandemic?

A European might say Italy or Spain. A Latin American likely would nominate Brazil or Chile for this less-than-desirable distinction.

A reader in the United States – if they have been reading the newspapers or watching cable news – would certainly say New York. In terms of total cases, that would be a good answer.

But in terms of the rate of infection, the Navajo Nation that includes parts of Arizona and New Mexico has the highest infection of the nation. And there is no other community competing for the top spot.

There are many ways to look at the numbers but let’s start with what the US Center for Disease Control (CDC) and the US Indian Health Service (IHS) have to say. 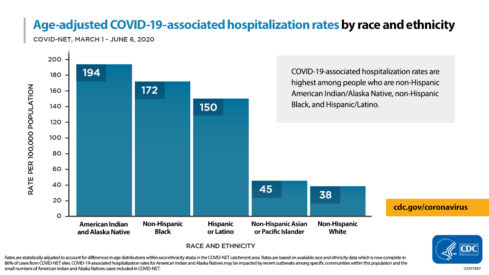 The Navajo Health Department, based in Arizona, reports that it has experienced 311 deaths from Covid-19. That is a fraction of the total in states like California, Illinois, and New York. But on a percentage basis, Native Americans are hospitalized for Covid-19 at a higher rate than any other racial or ethnic group.

The big question is why. For the answer, ZENIT talked with people in the Diocese of Gallup, New Mexico, which stretches across much of Arizona and New Mexico; it was created in 1939 with boundaries set to include the Navajo Nation.

“When people think about giving to charities they often think of Africa or Latin America,” said Suzanne Hammons, communication director for the Diocese of Gallup. “But I don’t know how many people don’t realize that there are places right here in American where people don’t have access to running water.

Hammons pointed out that the diocese was created primarily to serve the Native American population, which includes not only the Navajo Nation but several Pueblo and Apache communities.

The Church sees its primary role as caring for the spiritual needs of the people. However, it also operates a network of 10 schools that serve the Native American groups and works with various charities and mission groups to provide food and other home needs. 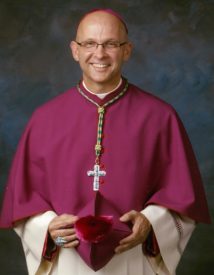 Bishops James S. Wall, who leads the Diocese of Gallup, pointed out that about a third of the 55,000 square miles of the diocese is in the Navajo Nation. And he said the challenges facing that community are significant.

Bishop Wall was born in Ganado, Arizona, where his father was a teacher and coach. In addition to leading the diocese, he chairs the Native America Affairs subcommittee for the United States Conference of Catholic Bishops.

“The biggest challenge we face is the level of poverty,” according to Bishop Wall. “When the Covid-19 pandemic hit, one of the things we all learned quickly was how to properly wash our hands, do it frequently and long enough to pray two Hail Marys.

“But on the Navajo Reservation, 30 percent of the people don’t have running water, and there wasn’t access to hand sanitizer. The nearest store can be 70-80 miles away and be just a small place.”

The concept of “social distancing” also is a bit difficult on the reservation. The homes are small and often include several generations living together in small quarters.

Bishop Wall admits to being disappointed by the continued severe poverty faced by many people in the diocese. He cites a parish served by the Missionaries of Charity in which the Sunday collection is only about $50.

But he is quick to add that there are positive signs of hope:

“The Church tries to make sure these people are not forgotten,” Bishop Wall said. “Sometimes that means getting people basic things they need to exist. 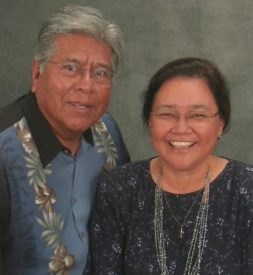 The Rileys live in Albuquerque, where they moved after careers at New Mexico State University. Although they don’t live on the reservation they are heavily involved as catechism teachers at St. Joseph Church in the Pueblo of Laguna for the past decade.

“Both Allen I grew up on a reservation and we’re grateful that both our large families are strong in their Catholic faith,” Angela said. Their extended families are spread throughout the area – on and off reservations – and work in all walks of life.

Angela explained that the pandemic has been a challenge in Laguna.  As might be expected, catechism classes are canceled. Each of the six villages in Laguna has checkpoints on the roads in and out of town where people coming and going must stop and explain their movements.

She has five siblings living on the Navajo Reservation, where movements are restricted and everyone is on quarantine on the weekends. While much of the state outside the reservations has eased pandemic restrictions, the Navajo governor has continued strict controls in response to the high number of infections.

“It is amazing that in 2020 we still have people living without running water and electricity,” Angela said. “Of course, that means many people don’t have access to the internet even though they are only a few miles from Albuquerque.”

One of Angela’s sisters is the principal of a reservation school. The schools is closed in response to pandemic restrictions but unlike schools in many parts of the country, this school can’t do online learning with its students. The teachers have used the alternative of driving to the widely spaced students’ homes with study packages – and food baskets.

Angela – like Bishop Wall – sees the challenges facing the diocese in dealing with poverty and healthcare. But like the bishop, she sees positive that can come from the pandemic.

“First, there is the awareness that people in this country are still living in these conditions… not in the United States of America. Our hope is that this will lead to efforts to make sure all of our people have access to water and electricity. Many dirt roads need to be paved.

“Second, in some ways, this has brought families closer. They are finding more prayer time as a family and working together. There are so many people who care about one another and we’re grateful to the many people who have donated food and money.”

Across the United States and the world, Catholics are praying for an end to the pandemic.  In many areas, people are still waiting to be able to return to the sacraments.

In the Diocese of Gallop, in the Native American communities, those prayers are shared. And there is a hope that the pandemic will increase awareness of the challenges faced by many living on reservations where people need what most Americans take for granted: running water, electricity, and a reliable roadway.

Video from Diocese of Gallup:

The existence of the human person is but a breath, his or her affairs are fleeting, but those who pray know they are precious in God's eyes. #Prayer