A restored cathedral in Aleppo, which was bombed countless times, is to be officially re-opened – a sign of the enduring presence of Christianity in a city where Islamists had threatened their very existence.

Catholic charity Aid to the Church in Need (ACN) provided key funds to repair the Maronite Cathedral of St Elijah, which was hit by missiles and mortars as Aleppo became the epicenter of the Syrian civil war. 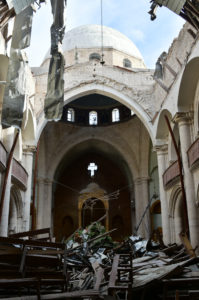 In an interview with ACN, Maronite Archbishop Joseph Tobji of Aleppo said the re-consecration of the cathedral on Monday (20th July) had a “symbolic and practical meaning”.

He said: “In the symbolic sense, it is a message to the parishioners and Christians in Aleppo and the world that we are still in this country despite our dwindling numbers and the restoration of the cathedral is proof of this.”

ACN staff were on the scene in early 2017, days after the ceasefire in Aleppo between regime and rebel forces, and saw the cathedral in its bomb-blasted state, with a huge in the roof, spanning at least a third of the nave.

ACN quickly committed to helping to rebuild the cathedral, which dates back to 1873 and which replaced a small 15th-century church built on the same site.

Dr. Thomas Heine-Geldern, ACN (International) Executive President, sent a message to the people of Aleppo to mark the cathedral’s re-opening, describing how the charity “has been with you throughout the most difficult times”.

He added: “We see the cathedral of St Elijah and it is a miracle. It is wonderful to see it shining with its former splendor.

“I hope that it will once again become the center for the whole Christian community just as it was before this terrible war.”

Archbishop Tobji said he hoped the cathedral’s restoration would encourage Aleppo’s Christians to feel they have a future in the city.

He said: “We Maronites have no place to bring us together other than this cathedral and the decision to restore it was self-evident, just like a family who wanted to renovate our only house that brought us together.”

Between 2011 and 2019, ACN supported 900 projects in Syria, providing both emergency and pastoral aid, and this year the charity has more than 100 ongoing projects in the country.

The #family is the place of encounter, of sharing, of going forth from ourselves in order to welcome others and stand beside them. The family is the first place where we learn to love. #WMOF22
https://www.vatican.va/content/francesco/en/events/event.dir.html/content/vaticanevents/en/2022/6/25/messa-famiglie.html