Growing up as a champion athlete in Rockford, Illinois, Stephanie Baliga had no dreams of becoming a nun, serving the poor, and living a life entirely focused on the Eucharist.

“When I started discerning religious life in college, I felt very called to the Franciscan community,” Sr. Stephanie said in an interview with ZENIT. “I visited various ones and didn’t feel at home. But a priest at University of Illinois suggested Our Lady of the Angels that it was a perfect match.”

Sr. Stephanie’s path to a religious vocation came after her running career suffered a serious injury while running for the University of Illinois track team.  Having focused most of her life on running, she admits the injury caused her to fall into a great sense of loss, even depression. Fortunately, she turned to her Catholic faith with a renewed vigor and sought deeper understanding and commitment, which led her to her life today.

Ironically, running has played an important role in her life in support of its mission.  Although injury ended her competitive college career, she remains a highly capable distance runner and has completed every Chicago Marathon starting in 2011 (with a personal best of 2 hours, 53 minutes in 2014). 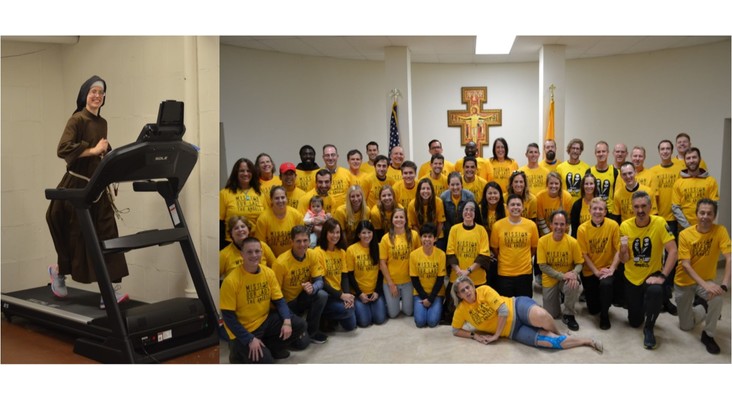 Sr. Stephanie leads a team of more than 100 runners (Team OLA) who participate in major races – including the Chicago Marathon – to raise money for the mission.  When this year’s marathon was canceled, Sr. Stephanie pledged to run a marathon on a treadmill to raise funds. The team has been raising money for the past decade and likely will reach a total of $1 million raised this year. In fact, St. Stephanie’s treadmill feat will likely put them over that mark.

Her treadmill marathon on Sunday, August 23, monitored by race officials and live-streamed on social media originally aimed to rise $40,000. But as word got out and donations started pouring in, she raised the goal to $80,000.  At last count the total had reached more than $111,000. You can go here to check the current amount and make a donation.

Efforts have been helped by coverage in Chicago’s major newspapers and television stations. Her time on the treadmill of 3 hours 33 minutes may go into the Guinness Book of World Records; apparently it has never been popular for women to run marathons on a treadmill.

A nun running a marathon – particularly one who was a former champion athlete – gets a bit of attention; Sr. Stephanie was featured in “Runner’s World” in 2019.

Sr. Stephanie is likely one of the few nun’s generating the equivalent of a six-figure income for her community’s mission, but the irony is that she is too busy to do much training.

“I barely run at all – don’t really train,” she admits. “I run the food pantry, am the business manager, do fundraising, and am the maintenance and construction lady. I also coordinate volunteers and teach religion part time at a K-8 school.”

All of which means that climbing onto a treadmill to run 26.2 miles was, as any distance runner can attest, a rather audacious decision. The only thing more challenging for a marathon runner than going the distance on a treadmill is doing a marathon on a standard quarter-mile track: a bit over 104 laps.

The money St. Stephanie raised will support the mission, which works in what by any definition is a challenging part of Chicago, known as West Humboldt Park.

To help you understand the extent of the challenges, here are some quick stats: (Source: Metro Chicago YMCA. “Kelly Hall Environmental Scan.” Chicago, IL, September 16, 2011), at the time the mission opened.

-97 percent of children surrounding the Mission qualify for free or reduced lunch
-42 percent unemployment rate
-$11,000 per capita yearly income
-67 percent high school drop-out rate
-70 percent of the neighborhood is overweight or obese
-One of the highest juvenile arrest rates in the city
-Food desert, defined by the USDA as an area with insufficient access to fresh, healthy food.

Some improvements have been made over the past few years but Our Lady of the Angels continues to operate in one of the most dangerous and impoverished areas of Chicago. And in 2020, violence, riots, looting, and shooting have plagued many areas of the city.

Despite those challenges (or perhaps because of them) the community has drawn 11 residents (one priest, one brother, 8 sisters, one postulant) with a remarkable history of education and achievement.

The degrees represented include accounting, economics, chemical engineering, nuclear engineering, and education. There are two former nurses and a speech pathologist. In addition to the afore-mentioned college runner, one was a college basketball player.

And Sister Alicia Torres became the 2015 champion on the Food Network’s reality TV cooking show, “Chopped” to win $10,000 for the community to help feed the poor. 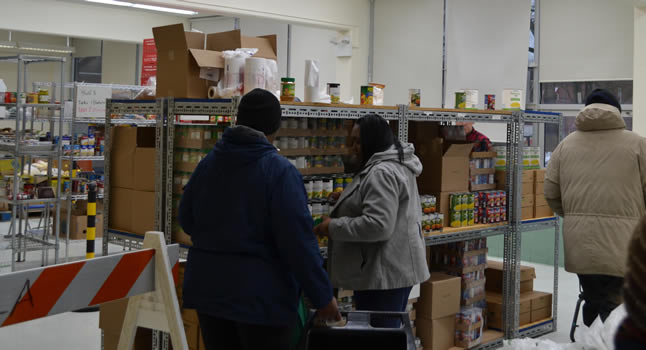 What is it about this Franciscan outpost in a rough neighborhood that attracts some of the best and brightest? St. Stephanie has a theory.

“We do direct service to the poor and we focus on the Eucharist,” she said. “The central part of our life is the Mass and Adoration.”

While other young women 10 years out of college are scrambling up the career ladder or planning families, Sister isn’t worried about where she will be in 10 years; God will take care of that.

“In 10 years, I can guarantee I’ll be doing a construction project of some type and I’ll be moving boxes around. And I’ll go to Mass every day and pray. I don’t think anything else is predictable.

“The overwhelming providence of God has been so clear. This is where God wants us to be to serve his people in Humboldt Park.”