Hot Topics
Nine Months After the Invasion of Ukraine, Pope Writes to the Ukrainian People
Cardinal Dolan and Bishop Robert Barron warn Senate that LGBT law puts Church at risk of discrimination
First statements of the Commissioner for Caritas appointed by the Pope
Women Are Taking On More Important Positions in the Roman Curia
World Jewish Congress announces launch of ‘Kishreinu’ (Our Bond) Initiative with catholics
Pope Francis Explains Spiritual Consolation in Nine Specific Points
“Let Us Do All that Is Humanly Possible to Put An End to War,” Pope’s Address to The World Jewish Congress
Pope’s Swatch Watch Up for Auction for Charity
The Holy Father appoints a Temporary Administrator to relaunch Caritas Internationalis and its service
An Italian Is the New Prefect of the Vatican Dicastery for the Oriental Churches

The figure of Mary must be freed from mafia manipulation.

Pope Francis stressed this in his recent message, dated Aug. 15, 2020, the Feast of the Blessed Mother’s Assumption, in a letter to Fr. Stefano Cecchin, President of the Pontifical International Marian Academy, which recently created a department to specifically study criminal and mafia phenomena, with the goal of “freeing the figure of Our Lady from the influence of criminal organizations.”

On Friday, Sept. 18, at the Museo della Civilta in the EUR business district of Rome, a conference or ‘morning of study’ was held to welcome the Pope’s invitation and examine this.

Moderated by TV2000 personality, Fabio Bolzetta, various important speakers and experts addressed the theme, to a private audience full primarily of experts and ambassadors to the Holy See. ZENIT English was among the invitees. 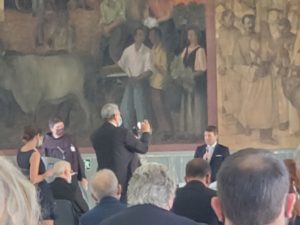 Pope St. John Paul II, Bolzetta recalled, launched similar appeals against the mafia and to protect Mary, citing his address on May 9, 1993, in Agrigento, Sicily. Speaking off the cuff, the Polish Pope denounced the Mafia as promoting a “a culture of death, profoundly inhuman, anti-Gospel, an enemy of human dignity and civil peace.”

“In the name of Christ,” St. Pope John Paul II said, “I say to those responsible: Convert! One day you will face the judgment of God!”. It is noteworthy too that the Polish Pope “John Paul II was a great friend of our academy”, as underlined by the President of the Pontifical International Marian Academy, Father Stefano Cecchin, at the start of the event. Then he read Pope Francis’ letter, as well as one from President of the Republic of Italy, Sergio Mattarella.

In his message to the Academy, Pope Francis stresses that “Marian devotion is a religious-cultural heritage to be safeguarded in its original purity, freeing it from superstructures, powers or conditions that do not meet the evangelical criteria of justice, freedom, honesty and solidarity.” Therefore the Pontiff adds that “it is necessary that the style of the Marian manifestations be in conformity with the message of the Gospel and the teachings of the Church.” 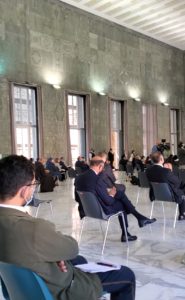 “But to imitate Mary one must first know her,” he noted, saying, for this reason, he toured many sanctuaries around the world.

“We have all had the experience of passing from the womb to a woman. This unites us and this also Jesus wanted to live. The academy must be like the house of the holy family, says Francis, where Jesus grew up in wisdom and grace.”

“Growing up,” the academic admitted, “I did not know the problem of the mafias and Maria.”

Noting many charlatans “use people’s feelings, but also their difficulties, they manipulate people’s feelings and consciences,” he said, “They propose a mute Maria who stays at home, subject to the mafia boss, and God blesses the actions of the mafia.”

“The Gospel instead presents Mary as an intelligent woman,” he underscored.

Father Gian Matteo Roggio, Director of the Department, stressed that this department “does not want to replace the existing ones, nor seek visibility, but does instead wish to make visible those engaged in this service, offering them a place to meet and exchange ideas and knowledge, which is a service to both the civil and the ecclesial communities” 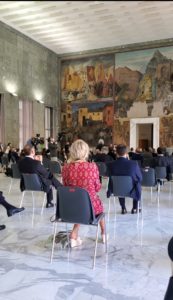 “We turn to young people because young people are a privileged target of crime organizations,” Roggio said, noting they are often scouted because they need money.

“But since the fight against the mafia is a work of education,” he highlighted, “we cater to adults above all,” as adults design the economic system. “We want to create educational paths that concern the concreteness of life,” Fr Roggio concluded.

Even the Substitute Attorney General of Italy’s Supreme Court, Stefano Tocci, stressed how “fundamental” it is to “culturally contrast” mafia phenomenon. “The mafia is not fought only in court, or with repression,” he said.

The department will focus on various areas, intended to interact among one another, including autochthonous and foreign mafias, national and international terrorism, gender-based violence, eco-mafia, juvenile distress, prevention of drug use by young people and crimes against humanity. The headquarters will be inside the Pontifical Antonianum University.  Activities and documents will be shared on a digital platform.

“This is meant to be just another analysis tool available to everyone,” the Academy director said. But the newly-instituted department, Bolzetta summarized “will not be just an observatory, the purpose is to act.”

The event ended with the solemn delivery of the appointment parchment to all the members of the department.

The Pontifical International Marian Academy was founded in 1946 by Father Carlo Balić, OFM, with the aim of promoting scientific, speculative and historico-critical studies of the Blessed Virgin Mary. Also to promote Marian devotion, the Academy has been connected, from the beginning, with the Congregation for the Doctrine of the Faith.

During this #Advent Season, let us ask the Lord to help us keep the lamp of faith alit in our lives, to be prepared to receive him, and that he fill us with peace and joy.

Women Are Taking On More Important Positions in the Roman Curia