Hot Topics
Pope’s Eight Ideas on Old Age and the Destiny of Human Life, Expressed during Wednesday’s General Audience
“Pope’s Visit to Ukraine Continues in Negotiation,” Says Ukraine’s Ambassador to the Holy See. Bucha on the Agenda
The “Eventful” Audience of the Pope: A Swiss Guard Fainted in Front of Him and a Child Interrupted His Catechesis
Christianophobia in Canada: Hate Crimes Skyrocket by 260%
Order of Malta: Letter to the Pope about the Order’s Reform of Those Who Constitute 90% of the Workforce
German Catholics Question the Leader of Their Episcopate and Receive a “Meaningless Answer”
Russia, China and Nuclear Arms: Interview with the Vatican Secretary of State
Chinese Communist Regime To Put on Trial Cardinal Emeritus of Hong Kong
Cardinal Jozef Tomko Died, the World’s Most Long-Lived Cardinal
After the Supreme Court’s Ruling, the State of Kansas Approved Abortion by Referendum

(ZENIT News / Washington, 05.07.2022).- Americans have less trust in their main institutions than a year ago, with significant declines in 11 of the 16 institutions evaluated and with no improvements in any of them. The greatest decline in trust are 11 percentage points less for the Supreme Court (before the Court issued controversial rulings on the arms and abortion laws), and 15 points less for the Executive.

These are some of the results of Gallup’s research, an American opinion poll that measured, for the first time, trust in institutions in 1973, and has done so annually since 1993. The poll in 2022 was carried out from June 1 to 20.

At present, trust oscillates between a maximum of 68% for small businesses and a minimum of 7% for Congress. The Army is the only institution , in addition to small businesses, in which the majority of Americans has trust (64%). Trust in the police, by 45%, has declined below the majority level only for the second time (the other instance occurred in 2020 in the weeks following George Floyd’s death at the hands of the Minneapolis police). 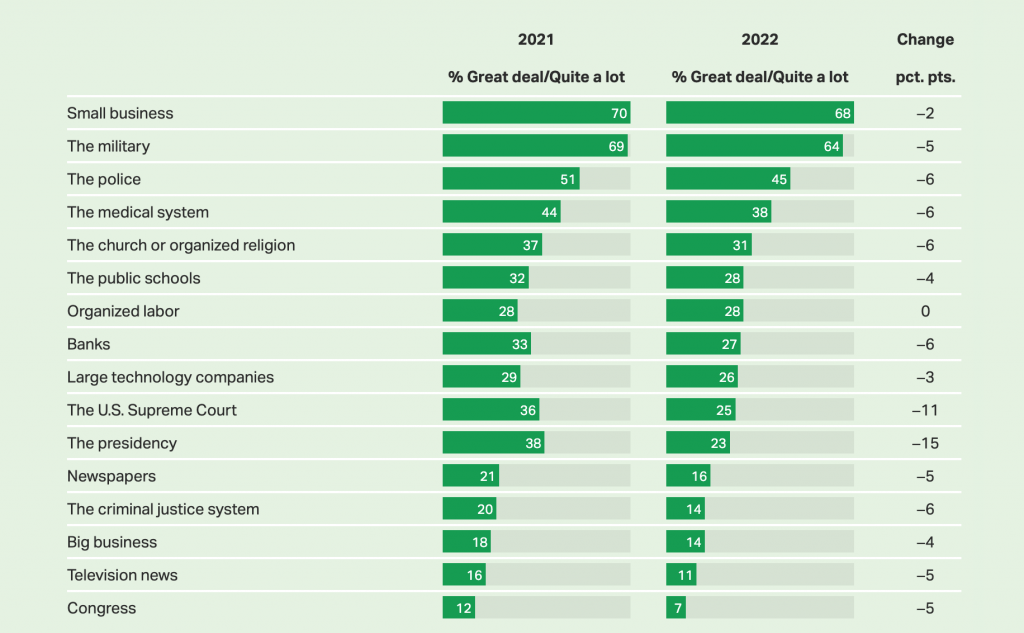 This year’s poll marks new minimums of trust for the three branches of the Federal Government: the Supreme Court (25%), the Executive (23%), and Congress (7%). Five other institutions are at their lowest points in at least three decades of measurement, including the Church or organized religion (31%), the newspapers (16 %,) the criminal justice system (14%), large companies (14%) and the police (45%).

Trust in large technology companies is also at a low point (26 %), but it has only been measured over the last three years.

Low Trust Level in All Institutions

Gallup summarizes Americans’ general trust in their institutions by taking an average of the grading of 14 institutions, which it measures every year, all minus small businesses and large technology companies. The 27% average this year of adult Americans that expressed “much” or “enough” trust in those 14 institutions is three points under the previous minimum of 2014.

The average trust has also declined by nine points since 2020, when Americans united around some institutions most affected by the COVID-19 pandemic, expressing greater trust in the medical system, the public schools and organized religion.

The average trust was of at least 40% between 1979 and 1990, and between 1998 and 2004. These last years encompassed the dotcom economic boom and the expression of support of governmental leaders after the September 11 terrorist attacks.

Since 2004, a series of factors have conspired to keep trust low, including the Iraq War, the Great Recession and the financial crisis, the growing partisan stagnation in Washington, the resurgence of populism, the COVID-19 pandemic and the rates of inflation not seen for four decades.

Sympathizers of all Parties Have Less Trust in the Institutions

In general all partisan groups have less trust in the 16 American institutions than a year ago, with an average decline of four points among Republicans, five points among Democrats and six points among Independents.

The Three Party Groups Have Much Less Trust in the Executive than a Year Ago, showing a decline of at least 10 points. Beyond that, the main changes among the party groups tend to be isolated in one or two groups. 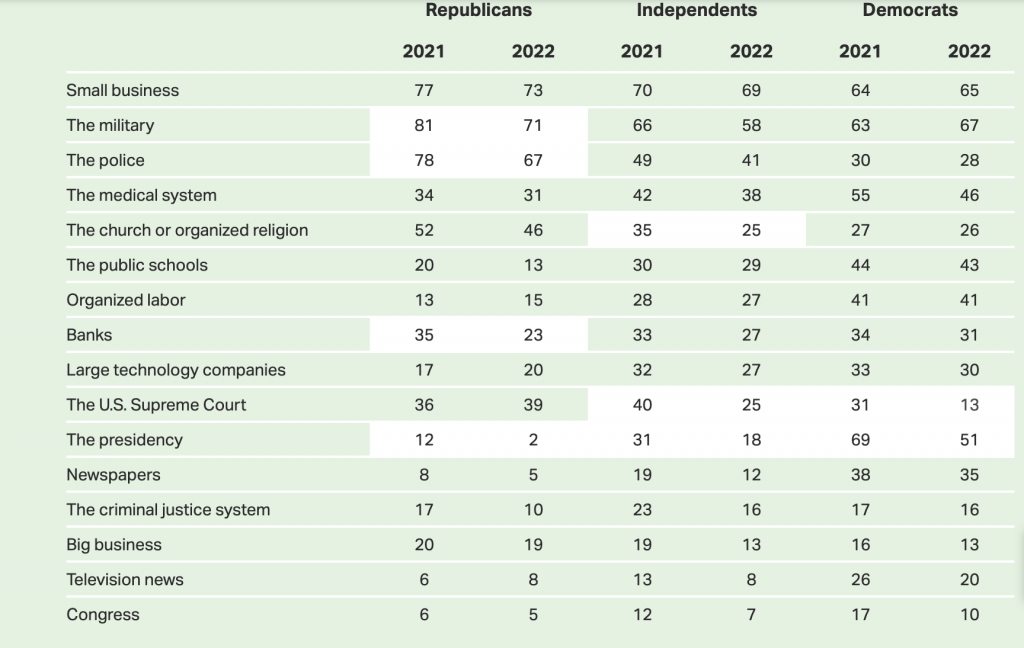 The Democrats and Independents show more than a two-digit loss of trust in the Supreme Court, without significant changes among the Republicans.

The Republicans have lost more trust in the banks than the other groups. The Republicans also show a two-digit decline in the Army and in the Police.

Independents have much less trust in organized religion than a year ago; there has been a smaller decline among Republicans and no real change among Democrats.

Small business and the Armed Forces are the two institutions graded more positively for each one of the party groups, whereas Congress is essentially tied in the lowest place among the three. Republicans grade the Executive, the newspapers and television news in a similar way to Congress. Television news links Congress as the lowest among Independents, whereas the Supreme Court and large companies have a grading as low as that of Congress among the Democrats.

Republican and Democrats differ more in the trust they have in the Executive (49 points), the police (39 points), the newspapers (30 points) and the public schools (30 points).The groups differ less, but still by significant margins, in their trust in the Supreme Court, organized work, organized religion, the medical system, the television news and the large technology companies.

Democrats trust more than Republicans in the majority of these institutions; the exceptions are the police, the Supreme Court and organized religion.

Americans’ trust in their institutions has been scarce during the greater part of the last 15 years, but their trust in key institutions has reached a new low this year. The majority of institutions followed by Gallop continue in historical minimums; the average trust in all institutions is now four points under the previous minimum.

In particular, trust in the main institutions of the Federal Government is at a low point, at a time in which the President and the Congress struggle to address the high inflation, record prices for gasoline, the increase of crime and armed violence, the continuation of illegal immigration and an important foreign policy with Russia and China. Trust in the Supreme Court had already diminished before the overturning of Roe vs Wade, although this ruling was expected after the leak of an opinion draft in May.

The crisis in trust extends beyond political institutions at a time in which 13% of Americans, almost an historical minimum, is satisfied with the way things are going in the United States. It’s doubtful that trust in the institutions will improve before the economy improves; however, it’s not clear if trust will return to the levels measured by Gallop in past decades, even with an improved economy.