President Biden held meetings with some Christian communities in the Holy Land. On Friday, July 15, he met with representatives of the three Rites that control the Basilica of the Nativity in Bethlehem — the Catholics, the Orthodox and the Armenians. Biden was in Bethlehem because it was there that he met with the Palestinian Head of State, Mahmoud Abbas.

The Catholic side was represented by the Custos of the Holy Land, Franciscan Francis Patton, who said to SIR Agency:

“The President visited a place that is dear to him. […] Biden also paused to pray in our Franciscan church of Saint Catherine, adjacent to that of the Nativity. I exchanged a few words with him while he was in the Manger and while accompanying him on a visit to Saint Catherine and then to the children of our schools, who welcomed him with John Lennon’s song ‘Imagine.’ The children, who were dressed in the typical costume and held Palestinian flags in their hands, chose this song significantly and precisely to reiterate their request to live in peace. All the peoples that inhabit this land need peace. Our desire, expressed to the President, is that everything possible be done for peace. As guardians of the Holy Places, we have reiterated [our desire] to accompany the efforts of politics with prayer. This is the message we are always trying to transmit.” 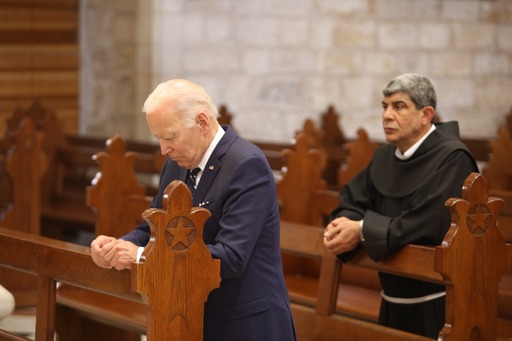 For his part, Orthodox Patriarch Theophilus III expressed to the U.S. President his concern for Christians in the Holy Land. “Patriarch Theophilus III stressed the need of an active American intervention to protect the Christian heritage and presence in the Holy Land, especially in the city of Jerusalem, which is witnessing unprecedented attacks by radical Israeli groups, who commit their crimes  without being called to account, in order to create an environment to repel Christians from their own city of Jerusalem,” states a press release.

“His Beatitude – it adds – also recalled the attacks on Christian churches, clergymen and faithful by members of these groups and their attempts to take over the properties of the Jaffa Gate, in a case which illustrates the horror and ugliness of the battle waged by these groups against the authentic Christian presence in Jerusalem.”

Theophilus also talked about the restriction of freedom of worship against Muslims and Christians, hindering believers from reaching freely their places of worship, giving as example the practices of the Israeli police during the 2022  Saturday of Fire, in which they hindered the faithful from reaching the Church of the Holy Sepulcher. The Patriarch of Jerusalem also pointed out the dangers of the Christian migration, especially from Jerusalem, and that the maintenance of the Christian presence is an important humanitarian message and of civilization, adding that the protection of the “status quo” is a priority for all the Churches, as is the case with the preservation of the Hashemite Custody of Muslim and Christian sacred places in the Holy Land.” 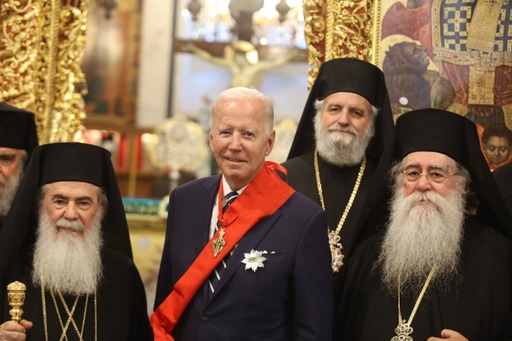 In a letter, the Orthodox Patriarch mentioned to Biden “the challenges that Christians are facing and the point to which things have reached, especially in Jerusalem, where churches are attacked, the Christian clergy is insulted, the faithful’s access to places of worship is blocked and attempts are made to appropriate Christian real estate in the main entrance to the Holy Sepulcher Church and the historical route of Christian pilgrims in the Jaffa Gate and the New Gate.”

The three religious leaders as well as the Latin-Catholic Patriarch of Jerusalem were guests at a reception in honour of Biden, held in the residence of the President of Israel, Isaac Herzog.

For its part, the White House said that Biden’s visit was to “stress the support of Christians who are facing challenges in the whole region.”