(ZENIT News / Vatican City, 31.08.2022).- The General Audience on Wednesday morning, August 31, was held in Paul VI Hall, where Pope Francis met with groups of pilgrims and faithful from Italy and from all over the world.

In his address in Italian, beginning a new series of catechesis on discernment, the Holy Father focused his meditation on the theme: What does it mean to discern? (Reading: Matthew 13:44, 47-48).

After summarizing his catechesis in several languages, the Holy Father expressed special greetings to the faithful present. Then he made on appeal for the World Day of Prayer for Creation, being held on Thursday, September 1, and prayer for the violent events that have taken place in Baghdad in recent days. The General Audience ended with the Pater Noster prayer and the Apostolic Blessing. 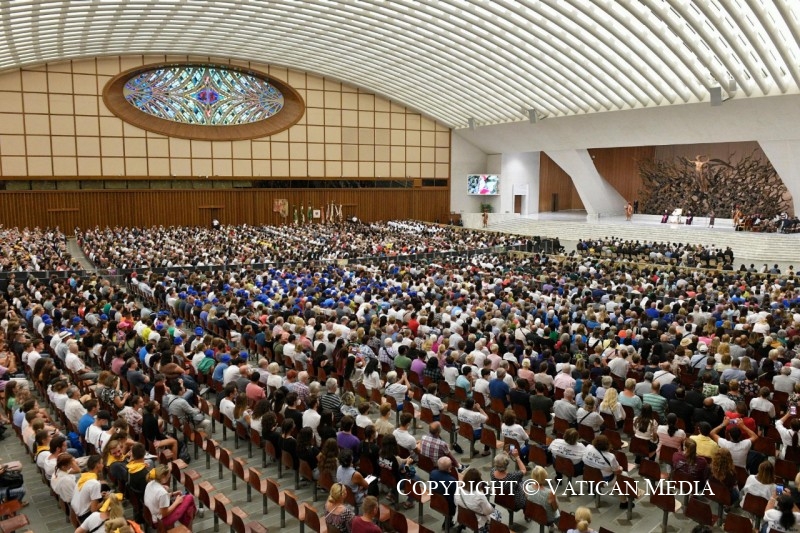 Here is the text of the catechesis in English, with headers in bold added by ZENIT.

Today we begin a new cycle of catecheses. We have finished the catechesis on old age, and we now begin a new cycle on the subject of discernment. Discernment is an important act that concerns everyone, because  choices are an  essential part of life – to discern decisions. One chooses one’s food, clothes, a course of study, a job, a relationship. A plan of life is carried out in all of them, and our relationship with God is also made concrete.

1st Discernment and the Gospel

In the Gospel, Jesus speaks of discernment with images taken from ordinary life. For example, He describes the fisherman who selects the good fish and discards the bad, the merchant who is able to identify, among many pearls, the one of greater value, and the farmer ploughing a field who finds a treasure (cf. Matthew  13:44-48).

2nd Discernment: an exercise of intelligence and ability of the will

In the light of these examples, discernment appears as an exercise of intelligence and also of ability and of will, to take advantage of a favourable moment. They are conditions to make a good choice. Intelligence, ability and also will are necessary to make a good choice. And there is also a necessary cost for discernment to be operative. For a fisherman to do his work in the best possible way, he must take into account the fatigue, the long nights on the sea, and the rejection of a part of his captures, accepting a loss of earnings for the good of the recipients. The pearl merchant doesn’t hesitate to sell everything  to buy that [special] pearl. And the man who comes across a treasure does the same. They are unexpected and unforeseen situations in which it is imperative to recognize the importance and urgency to take a decision. Each one of us must take his decisions; no one can take them for us. In a specific moment, free adults can ask for advice, think, but the decision is one’s own. One cannot say: “I’ve lost this, because my husband, my wife, my brother decided it.” No! You have to decide; everyone has to decide, and that’s why it’s important to be able to discern. To decide well, one must be able to discern.

The Gospel suggests another important aspect of discernment: it involves the affections. He who has found a treasure has no difficulty in selling everything, so great is his joy (cf. Matthew 13:44).The term used by the evangelist Matthew indicates a very special joy, which no human reality can give. And, in fact, it appears again in very few other passages of the Gospel, all of them referring to the encounter with God. It’s the joy of the Magi when, after a long and arduous journey, they see the star again (cf. Matthew 2:10). It’s the joy of the women who return from the empty sepulcher, after hearing the Angel’s announcement of the Resurrection (cf. Matthew 28:8). It’s the joy of those who’ve encountered the Lord. To take a good decision, a correct decision always leads one to that final joy. Perhaps one has to suffer some uncertainty, to think, to seek, but in the end the correct decision benefits one with joy. 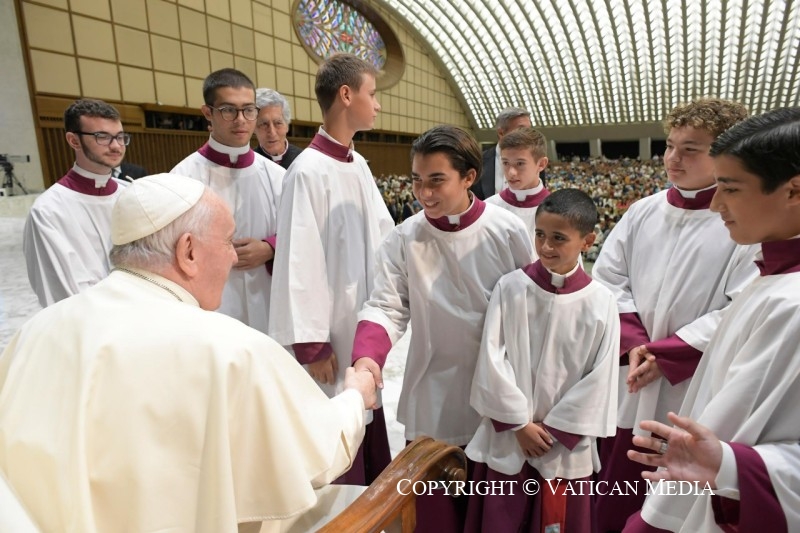 In the Last Judgment, God will discern –the great discernment– vis a vis us. The images of the farmer, the fisherman and the merchant are examples of what happens in the Kingdom of Heaven, a Kingdom that is manifested in the ordinary actions of life, which make us take a position. Hence, it’s very important to be able to discern. Great choices can arise from circumstances that, at first sight, seem secondary, but that turn out to be decisive.  Example, let’s think of Andrew’s and John’s first encounter with Jesus, an encounter that stems from a simple question: “Rabbi, where are you

staying?” – “Come and see” (cf. John 1:38-39), says Jesus. It was a brief exchange, but it was the beginning of a change that, step by step, would mark  a whole life. Years later, the evangelist continued to recall that encounter, which changed him for ever; he also recalled the hour: “it was about the tenth hour” (v. 39). It  was the hour in which time and the eternal met in his life. And in a good, correct decision, the Will of God encounters our will; the present path encounters the eternal. To take a correct decision, after a path of discernment, is to have the encounter of time with the eternal.

Hence, knowledge, experience, affection, will are some indispensable elements of discernment. We will see others, equally important, in the course of these catecheses.

As I said, discernment implies effort. According to the Bible, we don’t find before us, already packaged, the life we are to live. No! We have to decide all the time, according to the realities that present themselves. God invites us to evaluate and choose. He created us free and wants us to exercise our freedom. Hence, to discern is arduous. 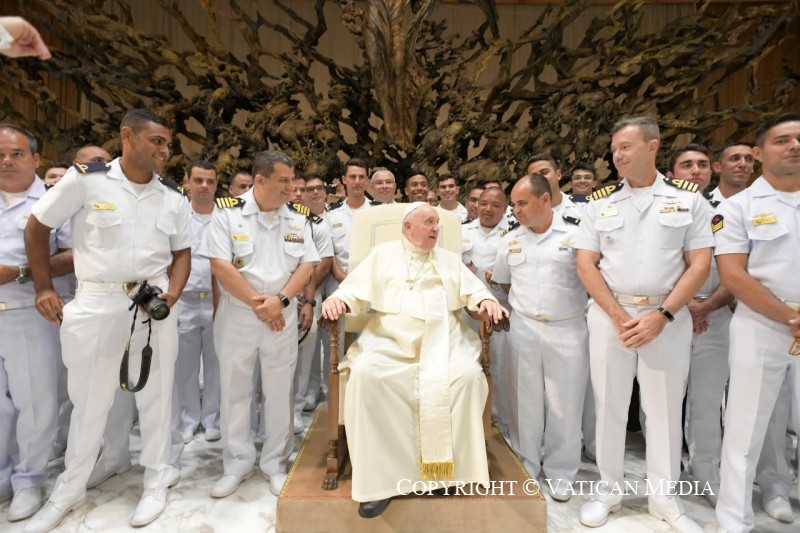 We have often had this experience: we chose something that seemed good to us but instead wasn’t so. Or we knew what was our true good and didn’t choose it. Unlike animals, man can be mistaken; he can want to choose incorrectly. The Bible demonstrates this from its first pages. God gave man a precise instruction: if you want to live, if you want to enjoy life, remember that you are a creature, that you are not the criterion of good and evil, and that the choices you make will have a consequence, for you, for others and for the world (cf. Genesis 2:16-17). You can make the earth a magnificent  garden or turn it into a desert of death. It’s a fundamental teaching; it’s no accident that it’s the first dialogue between God and man. The dialogue is: the Lord gives the mission, you must do this and that and, at each step, man must decide what decision to take. Discernment is that reflection of the mind, of the heart that we must do before taking a decision.

Discernment is exhausting but indispensable to live. It requires that I know myself, that I know what is good for me here and now. Above all, it requires a filial relationship with God. God is Father, and He doesn’t leave us alone. He is always willing to counsel us, to encourage us, to receive us, but He never imposes His Will. Why? Because He wants to be loved and not feared. And God also wants us to be children and not slaves – free children. And love can only be lived in freedom. To learn to live one  must learn to love and, for this, it’s necessary to discern. What can I do now, in face of this alternative? May it be a sign of greater love, of greater maturity in love. Let us pray that the Holy Spirit may guide us! Let us invoke Him every day, especially when we have to take decisions. Thank you.