Hot Topics
John the Baptist’s Secret: The Pope’s Second Advent Reflection During Sunday’s Angelus
Russian Soldiers Capture Third Catholic Priest. They Want to Extract Secrets of Confession from Them
England and Wales: The State of Priestly Vocations in 2022
How Can We Recognize That a Consolation Comes from God? Pope Explains It in Eight Points
Pope Francis’ Affectionate and Emotional Words About Benedict XVI at the Conferral of the “Ratzinger Prize”
One Out of Every Four Countries Worldwide Used Force to Impede Religious Practice During the Pandemic
The United States Deputy Secretary of State Will Visit the Vatican
Pope Francis closes 2022 with this intention for which he asks the whole Church to pray
USA: Bishop Barron responds to LGBT bill passed by Senate
Pope Francis: New date confirmed for historic Ecumenical Peace Pilgrimage to South Sudan adn Congo

(ZENIT News / Vatican City, 24.10.2022).- Made known on Saturday, October 22, was that the Holy See and the People’s Republic of China renewed the Provisional Agreement for the Appointment of Bishops in that Asian country.

After publishing the news, some important statements have been made by both sides. On Monday, October 24, a spokesman of the Chinese Ministry of Foreign Affairs was questioned by a journalist of AFP Agency. Specifically, the journalist asked: “This weekend the Vatican said that it had renewed an Agreement with China on the appointment of Bishops. Can you confirm this and give details on the Agreement?” Chinese spokesman Wang Wenbin answered:

“On October 22, after friendly consultations, China and the Vatican agreed to extend for two years the Provisional Agreement on the Appointment of Bishops. The two sides will continue to maintain close communication and consultation; they will work for the solid implementation of then Provisional Agreement  and will go forward continually in the process of improvement of relations.”

From the Vatican side, the statements have been broader and the personalities of higher rank. One of them was Filipino Cardinal Luis Antonio Tagle’s (whose complete statement can be read at this link) and the other was that of the Vatican Secretary of State, Cardinal Parolin.

Cardinal Parolin explained the context in which the renewal of the Provisional Agreement was brought about.

“In order to answer we need to recall that on 22 September 2018, the Holy See and the Government of the People’s Republic of China signed a Provisional Agreement regarding the Appointment of Bishops. This Agreement is “provisional” because we are still in the experimentation phase. As is always the case, such difficult and delicate situations require adequate time for implementation in order to then be able to verify the effectiveness of the result and identify possible improvements. Additionally, as we know, the outbreak of the Covid-19 pandemic has created understandable obstacles to meetings between the delegations, which are closely monitoring and evaluating the implementation of the Agreement itself. For these reasons, the validity of the Agreement was extended a first time in 2020 and is now extended again for another two-year period. Pope Francis — with determination and patient foresight — has decided to continue along this path not under the illusion of finding perfection in human rules, but in the concrete hope of being able to assure Chinese Catholic communities, even in such a complex context, of the guidance of pastors who are worthy and suitable for the task entrusted to them.” 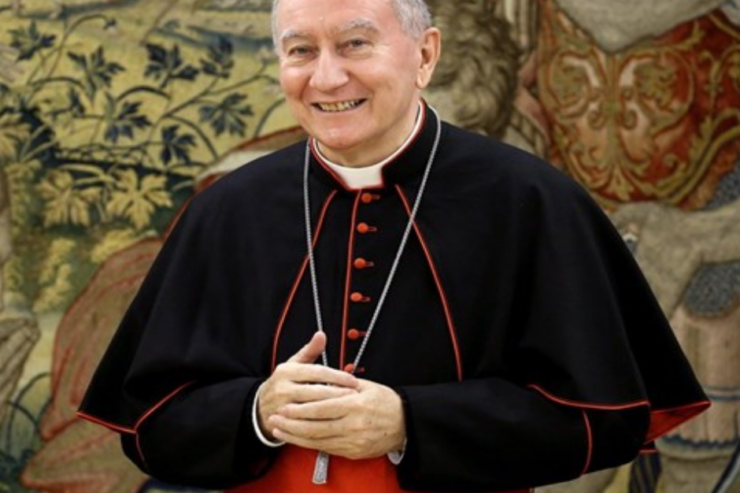 The Vatican Secretary of State also gave additional details on the procedures that are followed with the Chinese Government for the selection of Bishops.

“History teaches that the Holy See has often come, in the delicate and important matter of the appointment of Bishops, to reach an agreement on procedures that take into consideration the particular conditions of a country, without however failing in what is essential and fundamental for the Church, namely, the appointment of good and worthy pastors. The procedure set out in the Agreement was carefully considered, taking into account the particular characteristics of Chinese history and society and the consequent development of the Church in China. In this regard, I must also recall the many situations of travail and, at times, laceration in which Catholic communities have found themselves in recent decades. Therefore, it seemed prudent and wise to take into account both the needs expressed by the country’s authorities and the needs of the Catholic communities.”

Cardinal Parolin talked about the first fruits that followed this Agreement, now in its second renewal. The first is that, concurrently with the Agreement, as of September 2018, all Bishops of the Catholic Church in China are in full communion with the Successor of Peter, and there have been no more illegitimate episcopal ordinations. For the ordinary faithful, this can be seen daily in the Holy Mass celebrated by any Chinese priest: in fact, the Pope is explicitly mentioned in the Eucharistic prayer, something which was unthinkable years ago. The second outcome is the first six episcopal ordinations which took place in the spirit of the Agreement and in accordance with the established procedure that leaves the Pope the final and decisive say. The third outcome is that in this period the first six “clandestine” Bishops have also succeeded in being registered and thus have had their position made official, being recognized as Bishops by public institutions. These may seem small achievements but, for those who examine history with the eyes of faith, they are important steps toward the progressive healing of the wounds inflicted on ecclesial communion by the events of the past. Therefore, it is appropriate to emphasize once again, should there be any need, that the heart of the Agreement certainly has to do also with the consolidation of good institutional and cultural dialogue, but it mainly concerns aspects that are essential to the daily life of the Church in China. I am thinking, for example, of the validity of the Sacraments celebrated and the certainty for millions of Chinese faithful that they will be able to live out their faith in full Catholic communion, without thereby being suspected of not being loyal citizens to their country.

And, finally, asked about the six Ordinations that have taken place during the time the Provisional Agreement lasted, and if they are few, he said:

“These are the first ones, while other procedures are ongoing. At the same time, we are aware that there are still many vacant dioceses, as well as others that have very elderly Bishops. There are also dioceses in which the path to reconciliation, so greatly desired by Pope Francis, is setting the rhythm. Finally, there are dioceses in which, despite all efforts and good will, no fruitful dialogue exists with local authorities. We sincerely hope that in the next biennium we can continue to identify, according to the established procedure, good candidates for the episcopate for the Church that is in China. Of course, we do not hide the numerous difficulties that affect the concrete life of the Catholic communities, which enjoy our utmost attention, and for the good solution of which new steps forward are necessary in a collaborative relationship that has multiple protagonists: the Holy See, the central authorities, the Bishops with their communities, and the local authorities.

In light of our great trust in God’s Providence and comforted also by the suffering and luminous testimonies of so many Chinese Christians, the Supreme Pontiffs of our time (St. John Paul II, Benedict XVI, and Pope Francis) have decided to undertake and continue along, beyond any opposition, the path of constructive dialogue with China, in which the Provisional Agreement for the Appointment of Bishops occupies a limited but significant part. The ultimate goal of this journey is for the “little flock” of Chinese Catholics to advance in the possibility of living serenely and freely their Christian life, which is made up of the proclamation of the Gospel, solid formation, joyful celebration of the Eucharist, as well as an industrious witness of charity, in order to be close to those who struggle the most to cope with life, as was the case during the difficult time of the pandemic.”

I wish you all a good #Advent journey made up of many small gestures of #peace every day: welcoming gestures, gestures of understanding, closeness, forgiveness, and service... Gestures from the heart, like steps towards Bethlehem, towards Jesus, the King of peace.