At the end of the meeting, the Holy Father went to the Al-Fida’ Square of the Sakhir Royal Palace, for the closing of the “Bahrain Forum for Dialogue: East and West for Human Coexistence.” The Forum was the main reason for his visit to the country.

On his arrival at 10:00 am local time, the Pope was received by the King of Bahrain, His Majesty Hamad bin Isa bin Salman Al Khalifa, and the Grand Imam of Al-Azhar, Professor Ahmad Al-Tayyeb. They went together to the garden for the ceremony of the Tree of Peace. On arriving at the venue a parade took place of several aircraft and helicopters.

After the recitation of a prayer and the speeches of His Majesty the King of Bahrain and of the Grand Imam of Al-Azhar, Pope Francis gave his address. At the end of the ceremony the Pope returned by car to the Papal Residence, where he lunched in private. 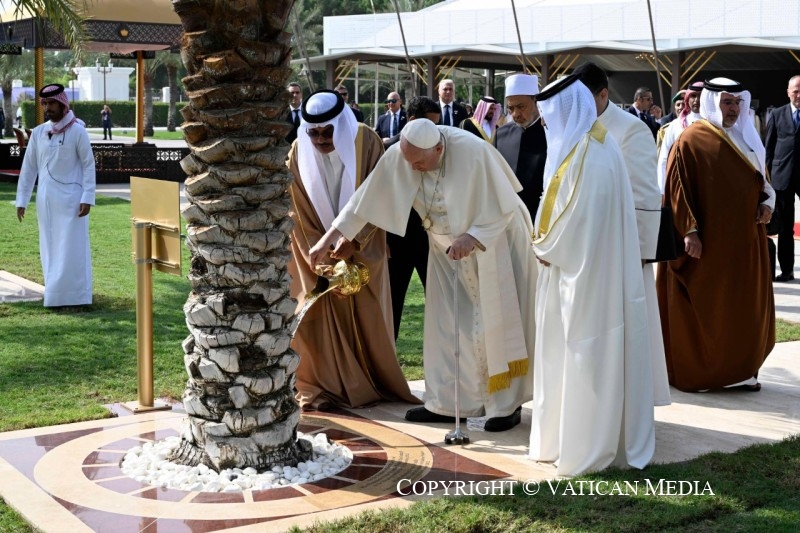 Shortly before 3:30 pm local time, the Pontiff met with the Ecumenical Patriarch of Constantinople, Bartholomew.

On their arrival, the Pope and Grand Imam of Al-Azhar were received at the Mosque’s entrance by the President of the Supreme Council of Islamic Affairs and member of the Council of Muslim Elders, and by the Secretary General, Counsellor Mohamed Abdelsalam.

After entering the Mosque and greeting the respective Delegations, two brief passages of the Koran and of the Book of Genesis were read. Then, after the introduction of the Secretary General of the Council of Muslim Elders, the interventions of the Representative of the Vatican Delegation, Cardinal Miguel Ángel Ayuso Guixot, M.C.J., Prefect of the Dicastery for Inter-Religious Dialogue;  the Representative of the Council of Muslim Elders, Dr Muhammad Quraish Shihab and the Grand Imam of Al-Azhar, the Pope Francis gave his address.

At the end of the meeting, and after greeting the members of the Council of Muslim Elders, the Holy Father went by car to the Cathedral of Our Lady of Arabia for the scheduled Ecumenical Meeting and Prayer for Peace. 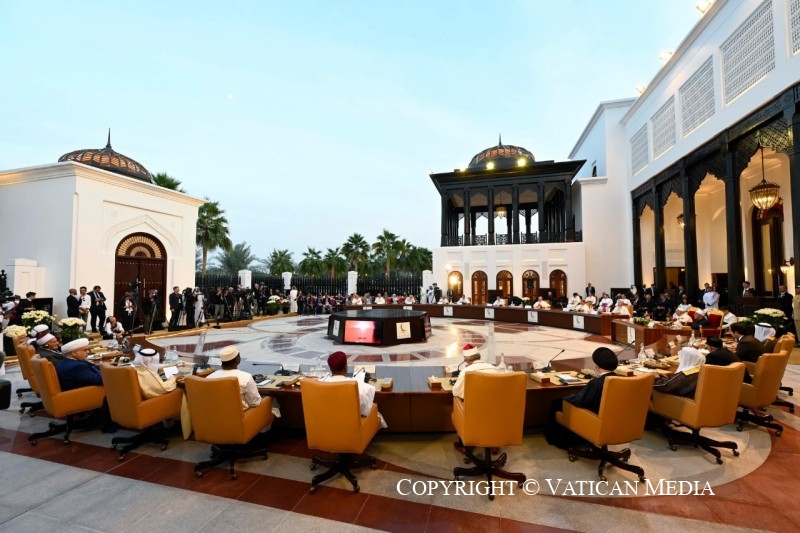 Visit to the Catholic Cathedral of Bahrain

The Ecumenical Meeting and Prayer for Peace took place at 5:45 pm in the Cathedral of Our Lady of Arabia.

On his arrival, Pope Francis was received at the Cathedral’s entrance by Monsignor Paul Hinder, O.F.M. Cap., Apostolic Administrator of the Apostolic Vicariate of North Arabia and by the parish priest, who gave him the cross and holy water for the aspersion. The Pope then went to the Chapel dedicated to the Virgin, where three girls offered him flowers, which he gave to the Virgin. After a moment of silent prayer, Pope Francis signed the Book of Honour. The entrance hymn was then sung, followed by the liturgical greeting, prayer and reading, after which the Pontiff gave his address.

The Prayer for Peace by the different Representatives of the Christian Churches and Communities then took place, followed by the Our Father prayer and the final Blessing. Saint Francis’ Prayer for Peace was then sung.

After the group photograph with Religious Leaders, the Holy Father returned by car to the Papal Residence where he dined privately. 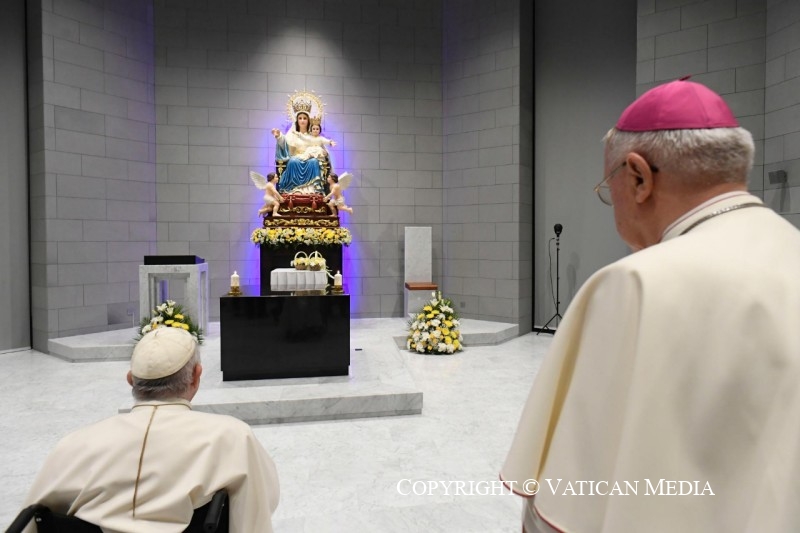