(ZENIT News / Vatican City-Rome-Awali, 02.11.2022).- On Thursday, November 3, Pope Francis began his 39th International Apostolic Journey, on this occasion to the Kingdom of Bahrain, to attend “Bahrain’s Forum for Dialogue: East and West for Human Coexistence.”

In the morning, before leaving his residence in Casa Santa Marta, the Holy Father met with three refugee families from Ukraine that have been received by Italian families. He was accompanied by Cardinal Konrad Krajewski, Prefect of the Dicastery for Charity. In the group was the wife of an Orthodox priest and two of her children, one 18 and the other 14 of the Kropyvnytskyi region, 150 kilometers from Mykolaiv. Her husband and adult son stayed in Ukraine. A second family was a 30-year-old mother with two daughters — 4 and 7 years old –, who fled from the partially occupied region of Zaporizhia. Also included in the group was a 53-year-old woman with a 13-year-old son who was seriously handicapped, and a 73-year-old mother from Kyiv.

After this meeting, the Pontiff went by car to the Rome-Fiumicino International Airport. At 9:45 am flight A330 / ITA  Airways took off for Awali with the Pope on board; the plane landed at 4:36 pm (3:36 pm Rome time). 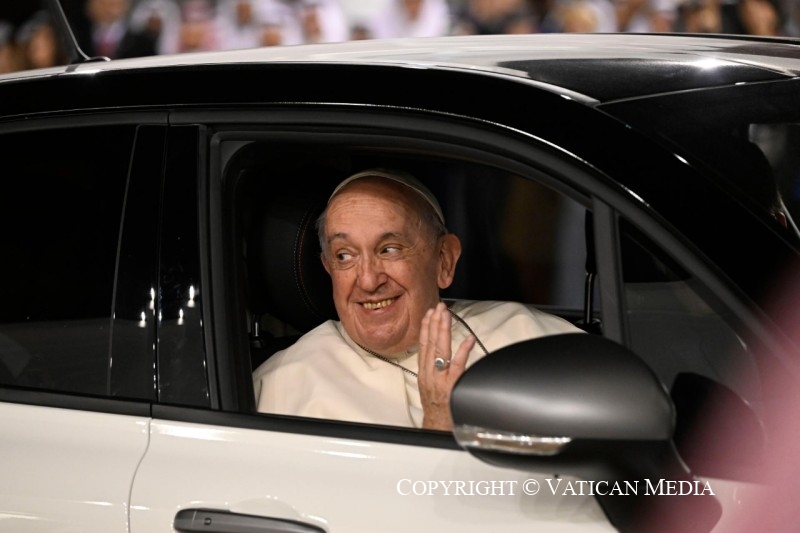 Pope Francis was welcomed officially at the Awali Sakhir Air Base, after which he  paid a courtesy visit to His Majesty the King of Bahrain in the Royal Palace of Sakhir.

On his arrival at the Sakhir Air Base in Awalim the Holy Father was received by His Majesty Hamad bin Isa bin Salman Al Khalifa, heir apparent and Prime Minister, three other children of the King and a granddaughter. Some children dressed in the traditional costumes scattered rose petals while the Pope and Monarchs passed through the Guard of Honour, greeted their respective delegations and arrived at the Royal Hall where a brief private meeting took place.

At the end, the Pope and members of Bahrain’s Royal Household greeted the Grand Imam of al-Azhar, Ahmad Muhammad Al-Tayyeb. The Holy Father then went to the Royal Palace of Sakhir to pay a courtesy visit to His Majesty the King of Bahrain. 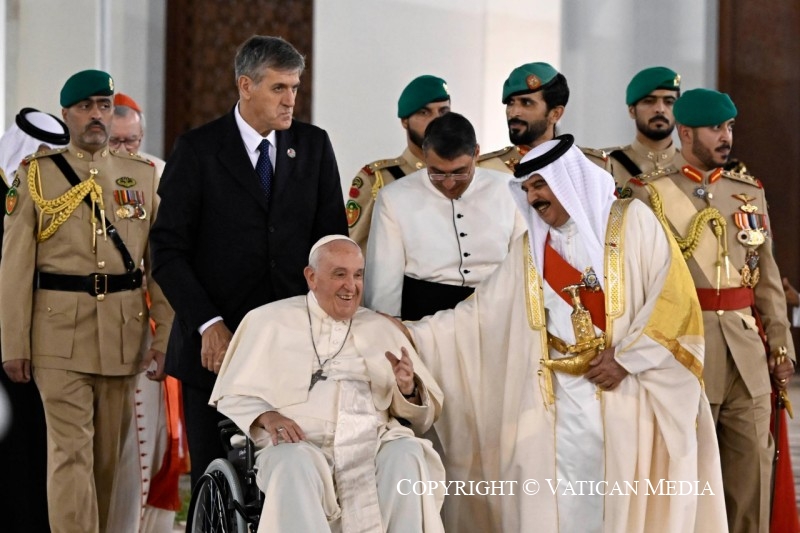 On his arrival, he was greeted by His Majesty the King, the heir apparent and the Prime Minister, three more children and a  granddaughter. Then they went together to the Green Hall. After the official photograph and exchange of gifts, a private meeting was held which was also attended by the Cardinal Secretary of State , Pietro Parolin; the Deputy Secretary of State, Archbishop Edgar Peña Parra; the Secretary for Relations with States and International Organizations, Monsignor Paul Richard Gallagher; the Apostolic Nuncio, Monsignor Eugene Martin Nugent, and the Secretary of the Apostolic Nunciature.

The Kings then accompanied the Holy Father to the patio of the Royal Palace for the Welcome Ceremony and meeting with the Authorities, the Civil Society and the Diplomatic Corp. 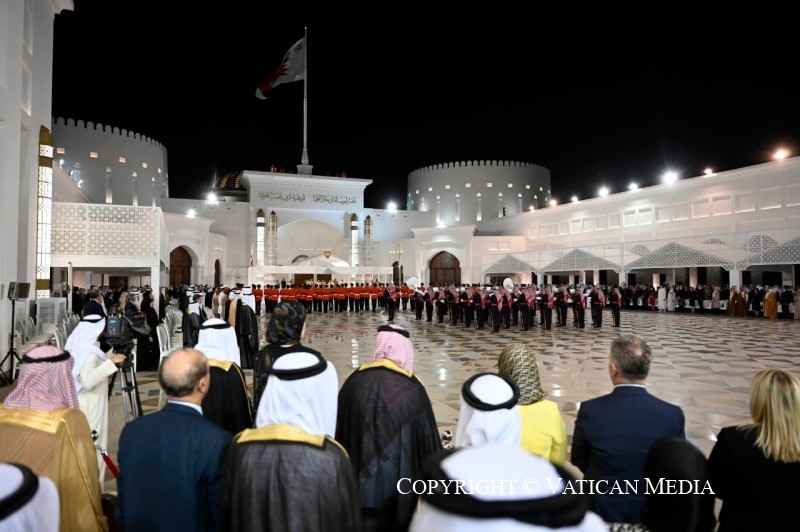 Welcome Ceremony and Meeting with the Authorities, the Civil Society and the Diplomatic Corps in the Patio of the Royal Palace of Sakhir

At the end of the courtesy visit to His Majesty the King of Bahrain, the Welcome Ceremony took place in the patio of the Royal Palace of Sakhir. After the playing of the hymns and the Guard of Honour, Pope Francis met with the Authorities, the Civil Society and the Diplomatic Corps.

The Pope then gave his address, after that of His Majesty the King  of Bahrain. Then, after taking leave of His Highness, the Holy Father went by car to the papal residence, where he dined in private.