(ZENIT News / Awali, 06.11.2022).- After celebrating Holy Mass in private on Sunday, October 6, Pope Francis left the Papal Residence and went by car to the Sacred Heart Church of Manama, where, at 9:20 am a prayer meeting took place and the recitation of the Angelus with Bishops, Priests, Consecrated Persons, Seminarians and Pastoral Agents present in Bahrain.

On his arrival, the Holy Father was received in front of the parish church by the Minister of Justice of the Kingdom of Bahrain and three children accompanied by a nun , who offered him flowers. After the welcome greeting of Monsignor Paul Hinder, Apostolic Administrator of the Vicariate of Northern Arabia, and of the parish priest, who took the cross and holy water for the aspersion, the Pope came down the nave to the presbytery, accompanied by singing.

After the singing and the welcome address of the Apostolic Administrator of the Vicariate of Northern Bahrain and the liturgical greeting, a pastoral agent and a nun gave their testimonies. Then, after a reading of Saint John’s Gospel, Pope Francis gave his final address and led the Angelus prayer. 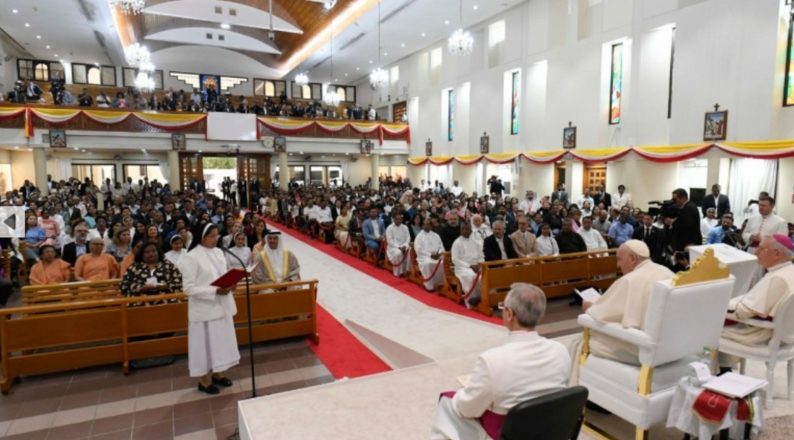 After the blessing and the final hymn, the Pontiff signed the Book of Honour and went to the old church of the Sacred Heart on a private visit, accompanied by the Superiors of the State Secretariat, the Cardinals, the Apostolic Nuncio and the Apostolic Administrator.

Then, before returning to the Papal Residence for a brief rest, the Holy Father met with a group of a dozen Catholic pilgrims, from this geographic area, in a room of the Sacred Heart Church complex. He thanked the pilgrims for their witness, in communion with the whole Church, and he advised them not to cease trusting in prayer and not to lose their sense of humour, “the smile of the heart.” He gave the group his heartfelt blessing and greeted each one individually.

During his brief stay in the Residence, Pope Francis greeted the Minister of Justice of the Kingdom of Bahrain, Head of the Committee of Honour, who attended the events of these days in the country’s name. 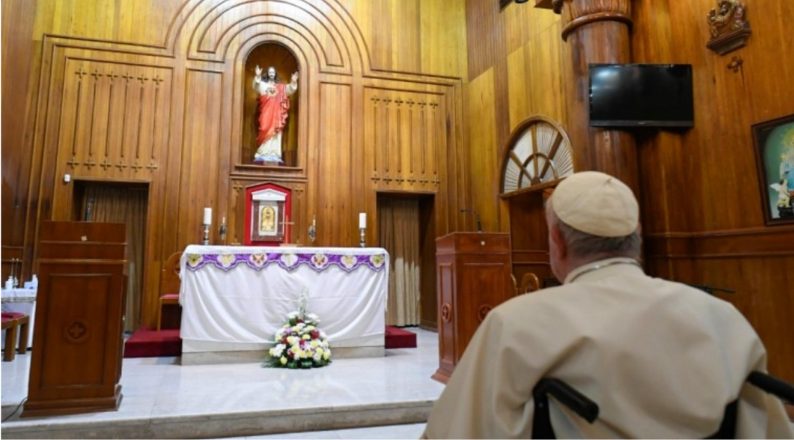 Hours later, after leaving the Papal Residence, the Pope went by car to the Sakhir Air Base in Awali for the farewell ceremony of the Kingdom of Bahrain.

On his arrival, he was received by the King of Bahrain, His Majesty Hamad bin Isa bin Salman Al Khalifa, the Heir Apparent and Prime Minister, three other children of the King and a grandson at the entrance of the Royal Hall, where a brief meeting took place.

After the Guard of Honour and greeting of the respective Delegations, the Pontiff boarded Gulf Air flight B787 to return to Italy. 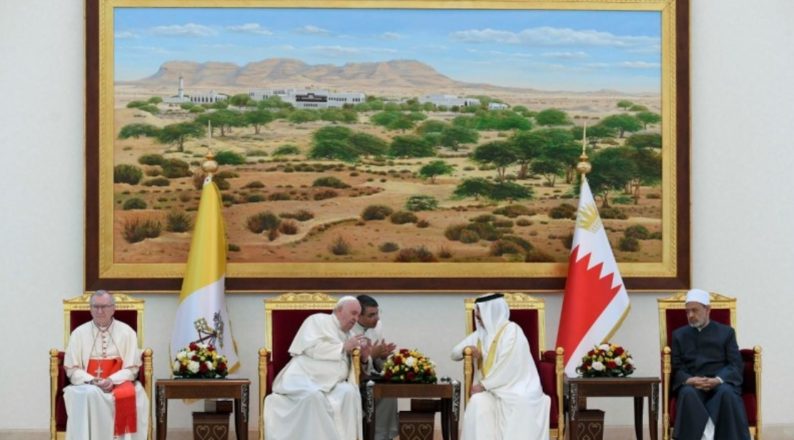 The plane took off from the Sakhir Air Base in Awali at 1:16 pm local time, and landed in the Rome-Fiumicino Leonardo da Vinci International Airport at 4:36 pm.

On his arrival in Rome, Pope Francis went to the Basilica of Saint Mary Major for a visit to the Virgin Mary, to thank Her for the trip.