Here is the Pope’s address translated into English. The Holy Father suggested three guidelines to the Commission, and asked the members to ask themselves if the Theology classes arouse astonishment. He also noted that there must be more women theologians in the Commission.

I thank Cardinal Ladaria for his kind words and express my gratitude to all of you for the generosity, competence and passion with which you have taken up your service in this tenth five-year period of the International Theological Commission.

Thanks to the tools available to us today, you have been able to begin your work remotely, overcoming the difficulties that the pandemic still causes. I am also happy about the reception you gave to the proposals of the three themes to explore: the first is the inalienable and always fruitful actuality of the Christological faith professed by the Council of Nicaea, on the 1700th anniversary of its celebration (325-2025); the second is the examination of some anthropological questions that arise today and that are of crucial importance for the human family’s journey, in the light of the divine plan of salvation; and the third is the deepening – today ever more urgent and decisive – of the Theology of Creation from a Trinitarian perspective, hearing the cry of the poor and of the earth. 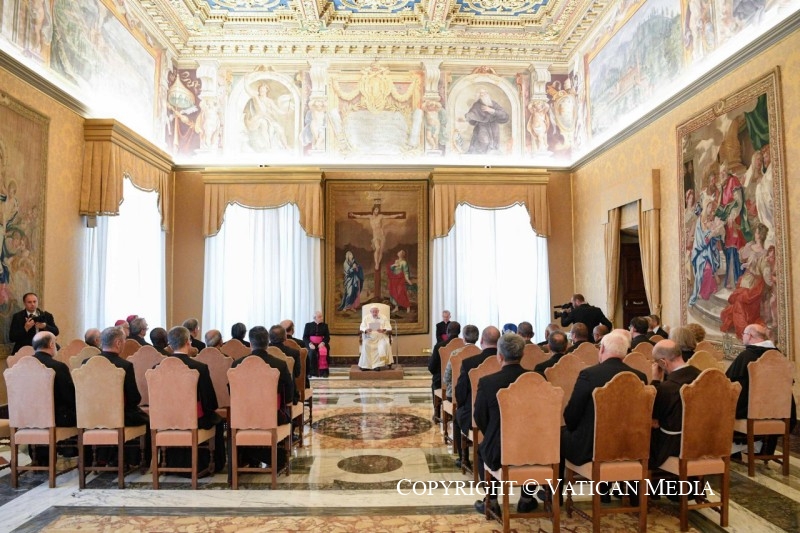 By addressing these topics, the International Theological Commission continues its service with renewed commitment. You are called to do so in the wake of Vatican Council II , which – sixty years after its beginning – is the sure compass for the journey of the Church, “sacrament, in Christ, of the union with God and of the unity of the whole human race”(Dogmatic Constitution Lumen Gentium, 1).

I would like to point out to you three directions to follow at this moment of history. An arduous moment and yet, for the eyes of faith, charged with promise and hope that sprout from the Easter of the Lord, crucified and risen.

1st Creative Fidelity to the Tradition

The first guideline is the creative fidelity to the  Tradition. It is about taking up and carrying out with fidelity and love the commitment to exerciser the ministry of Theology –in the listening of the Word of God, of the sensus fidei of the People of God, of the Magisterium and of the charisms; and in the discernment of the signs of the times for the progress of the Apostolic Tradition, under the assistance of the Holy Spirit, as Dei Verbum teaches (cf. n. 8). In fact, Benedict XVI describes the Tradition as “the living river in which the origins are always present” (Catechesis, April 26, 2006); so that it waters different lands, nourishes different geographies, making the best of that land, the best of that culture sprout. Thus, the Gospel continues to be incarnated in all the corners of the world, in an ever new way” (Apostolic Constitution Veritatis Gaudium, 4d).

The Tradition, Origin of the Faith, Either Grows or Is Extinguished, because someone said – I believe he was a musician — that the Tradition is the guarantee of the future and not a museum piece. It’s what makes the Church grow from below up, as a tree – from the roots. Whereas someone else said that traditionalism is the “dead faith of the living” –when one just clams up. The Tradition – I wish to stress –makes us advance in this direction: from below up, vertically. There is a great danger today, which is to go in another direction: “backwardness.” To go backwards. “It has always been done this way”: It’s better to go back, which is safer, and not advance with the Tradition. We have seen that this horizontal dimension has made some Movements — Ecclesial Movements –, remain fixed in time, in a backward direction. They are the backward ones. I am thinking — to give a historical reference – of some Movements that were born at the end of Vatican I, trying to be faithful to the Tradition, and that today are developed in such a way that they order women, and other things, from this vertical direction, where the moral conscience grows, grows, the awareness of faith grows, with that beautiful rule of Vincent of Lérins: “ut annis consolidetur, dilatetur tempore, sublimetur aetate.” This is the rule of growth. Instead, backwardness leads one to say: “it has always been done this way, it’s  better to go on this way,” and one is unable to grow. You, theologians, think a bit about this on how to help. 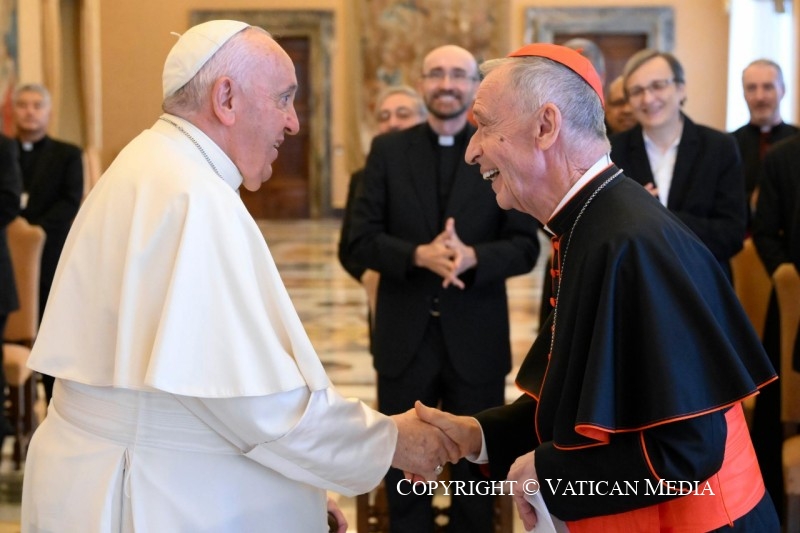 2nd The Deepening and Inculturation of the Gospel

The second guideline refers to the suitability to carry out with pertinence and incisiveness the work of deepening and inculturation of the Gospel, to open oneself with prudence to the contribution of the different disciplines through consultation with experts, including non-Catholics, as foreseen in the Commission’s Statutes (cf. n. 10). It’s about – I asked for it in the Apostolic Constitution Veritatis Gaudium –  assessing the “principle of inter-disciplinarity, not so much in its “weak” form of simple multi-disciplinarity, as focus, which fosters better understanding from various points of view, of an object of study, but rather in its “strong” form of trans-disciplinarity, as placement and fermentation of all knowledge in the area of Light and Life, which offers the Wisdom that emanates from the Revelation of God” (n. 4c).

3rd Collegiality: Difference between the Theologian and the Catechist

Finally, the third guideline is that of collegiality. It acquires special relevance and can offer a specific contribution in the context of the synodal journey, in which the whole People of God is convoked. It is stressed thus in the Document elaborated in this regard during the previous five-year period on Synodality in the Life and Mission of the Church: “As any other Christian vocation, the theologian’s ministry, in addition to being personal, is communal and collegiate. Hence, ecclesial synodality commits theologians to do Theology in a synodal way, fostering among them the ability to listen, to dialogue, to discern and to integrate the multiplicity and variety of instances and contributions” (n.75).

Theologians must go beyond, they must try to go beyond. However, I want to distinguish this from the catechist. The catechist must give the correct doctrine, the solid doctrine, not the possible novelties, of which some are good, but what is solid; the catechist transmits the solid doctrine. The theologian dares to go beyond, and it is the Magisterium that stops him. However, the theologian’s vocation is always to venture to go beyond, because he intends it, and tries to make Theology more explicit. But one must never give catechesis to children and to people with new doctrines that aren’t safe. This distinction isn’t mine, it’s Saint Ignatius of Loyola’s, who I believe understood this somewhat better than I do. 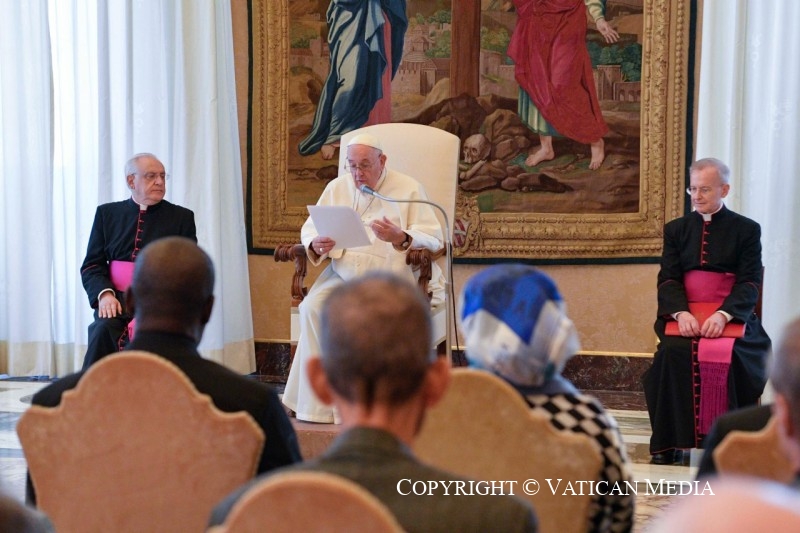 Hence, in this spirit of mutual listening, of dialogue and of communal discernment, I desire for you openness to the voice of the Holy Spirit, peaceful and fruitful work. The topics entrusted to your attention and competence are of great importance in this new stage of the proclamation of the Gospel, which the Lord calls us to live as Church at the service of universal fraternity in Christ. In fact, they invite us to assume fully the look of the disciple  who, with ever new astonishment, recognizes that Christ, “precisely by revealing the mystery of the Father and of His love, also reveals man fully to himself and manifests to him his most lofty vocation” (Pastoral Constitution Gaudium et Spes, 22); and thus teaches us that “the fundamental law of human perfection and hence, also, of the transformation of the world, is the new commandment of love” (Ibid., 38). And I have used the word “astonishment.” I think it is important, perhaps not so much for researchers, but yes for Theology Professors to ask themselves if the Theology classes cause astonishment in those attending them. This is a good criterion, it can help.

Dear brothers and sisters, I thank you for your valuable service, truly valuable. I bless each of you and your fellow workers from my heart. And I ask you, please, to pray for me.

I believe that, perhaps, it would be important to increase the number of women, not because they are fashionable, but because they think in a different way from men and make of Theology something more profound and also more “tasty.” Thank you.