(ZENIT News / Rome, 29.12.2022).- The announcement about Benedict XVI’s state of health sparked many questions related both to the protocol to be followed in the Vatican as well as many other things related to the Pope Emeritus.

It was Pope Francis who, at the end of the General Audience on December 21 made a topic of public discussion an aspect related to the private life of the Pope Emeritus: “I would like to ask you all for a special prayer for Pope Emeritus Benedict, who supports the Church in silence. Remember him, he is very ill, and ask the Lord to console and support him in this testimony of love for the Church, until the end.”

A short while later, the Holy See Press Office stated: “verified in the last hours is a deterioration due to his advanced years.” A day later, Thursday, December 29, the same spokesman said that Benedict XVI “is absolutely lucid and alert and today, although his state continues to be serious, the situation at present is stable.”

Benedict XVI is 95 and will be 96 in April of 2023. It was in fact at 96 that his brother Georg died in 2020, who was also a priest. In addition to his brother, the Pope Emeritus had a sister who died in 1991 at 67. Maria did not marry and dedicated her life to the service of her brothers. Benedict XVI has no living relatives. 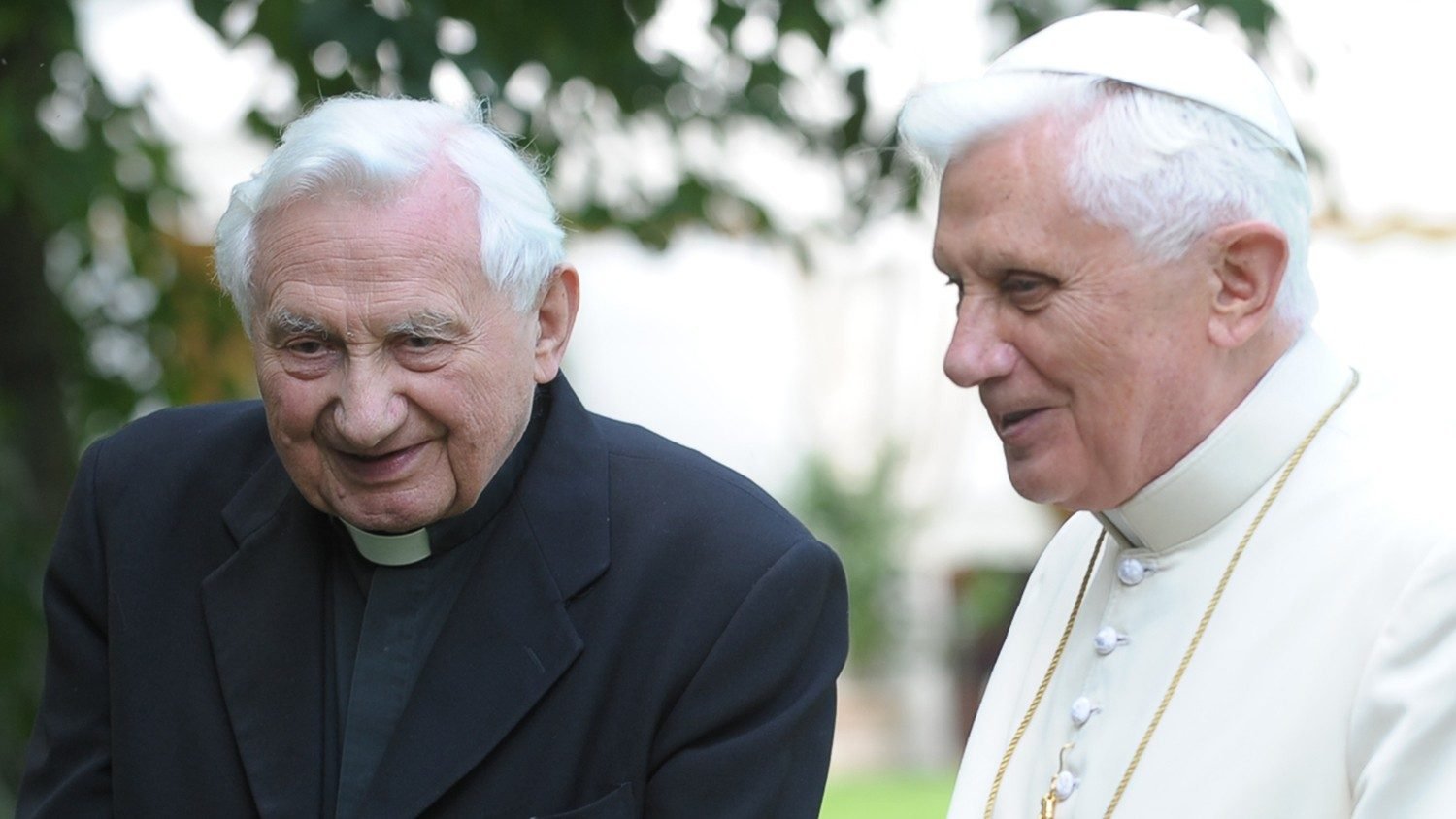 The Protocol to Be Followed

The issue that catches most attention, in regard to Benedict XVI’s  eventual death, is what protocol will be followed.

The procedure is clear if the one who dies is an acting  Pope, but this ceases to be the case when it is a Pope Emeritus. It’s a novelty not covered by the Constitution Universi Dominici Gregis, the Constitution in force that regulates the sede vacante and the election of a new Pontiff.

In regard to an acting Pope, chapters III and V state:

1)Having received the news of the death of the Supreme Pontiff, the Chamberlain of the Holy Roman Church must verify officially the Pontiff’s death in the presence of the Master of Pontifical Liturgical Celebrations, of the Prelate Clerics and of the Secretary and Chancellor of the Apostolic Chamber, who must issue the document or authentic death certificate (n. 17).

2) The obsequies in suffrage for his soul are held during nine consecutive days, according to the Ordo Exsequiarum Romani Pontificis (n. 27)

3) The certification if the deceased Pope is buried in Saint Peter’s Basilica (n. 28) 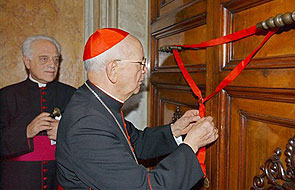 1)To take with any means images of the sick Supreme Pontiff in bed or deceased, or to register with any instrument his words to then reproduce them (n. 30)

That if there is a Testament of the Pontiff, leaving private letters or documents, and if he has designated a testamentary executor, it is for the latter to establish and execute the Testament , in keeping with the mandate received from the testator, in regard to the private properties and writings of the deceased Pontiff. The said executor must give an account of his work solely to the new Supreme Pontiff (n. 32)

These indications of the Constitution Universi Dominici Gregis seem to be the ones, with some changes, which would also apply for Benedict XVI, despite the fact it is about a Pope Emeritus.

It is foreseeable that the Pope Emeritus would be exposed in the Vatican Basilica for the veneration of the faithful, unless he himself had decided otherwise.

Given that Pope Francis attends all the obsequies of Cardinals and, in this case, it would be  his immediate Predecessor, it is highly probable that he would preside over Benedict XVI’s funeral Mass. 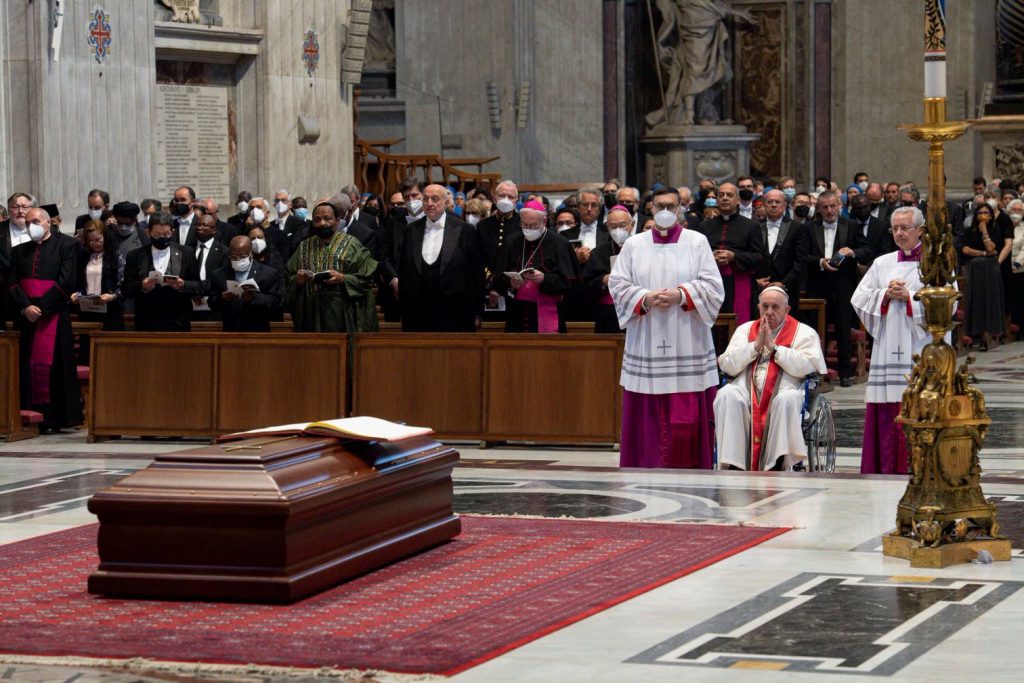 What Happens with the Copyright of Joseph Ratzinger’s Works?

Another interesting question is what will happened with his properties. Joseph Ratzinger is not only a prolific writer but also a bestseller. It could be said that, had he not chosen to be Pope, he would have enjoyed and lived comfortably off the royalties of his writings, which are in the dozens and have been translated into different languages. However, as early as 2005 he ceded to Vatican Radio the rights of conferences, homilies, interviews and addresses given before he was elected Pope and, in the same year, he ceded the copyrights of all his works to the Libreria Editrice Vaticana. Another part of what his works have generated has gone to the Joseph Ratzinger Foundation, which grants annually the so-called “Nobels in Theology.”

What Will Happen to the House Where He Lives and to Those that Accompany Him?

Given that the house – which in reality is a Monastery where cloistered nuns lived before — is the property of the Holy See and is in the Vatican territory, after the Pope Emeritus’ death the decision regarding the fate of the house will correspond directly to Pope Francis or to the President of the Governorate of Vatican City State, Legionary of Christ Cardinal Fernando Vérgez.

The four Communion and Liberation consecrated virgins would return to one of their  communities, and Monsignor Gänswein would return full time to the post he currently holds — but which he cannot carry out fully in the Roman Curia, as he looks after the Pope Emeritus — of Prefect of the Papal Household (the Prefect is at the head of the Household and supervises the activities of all those that are part of it. He is often seen next to the Pope in public events).

The previous private secretary of a Pope (Stanislaw Dziwisz) was created Cardinal and was in charge of the Archdiocese of Krakow.