On August 9, we remember a Jewish woman, Edith Stein, who loved the cross and embraced its contradiction and mystery throughout her own life. There is a very striking, life-size, bronze sculpture of Edith Stein in the center of the German city of Cologne, close to the archdiocesan seminary. The sculpture depicts three Edith Steins at the three critical moments of her life. The first moment presents Edith as the young Jewish philosopher and professor, a student of Edmund Husserl. Edith is presented deep in meditation and a Star of David leans against her knee.

The second depiction of the young woman shows Edith split in two. The artist shows her face and head almost divided. She moved from Judaism to agnosticism and even atheism. Hers was a painful search for the truth.

The third representation is Edith as Sister Teresa Benedicta of the Cross, and she holds in her arms the crucified Christ: “Teresa blessed by the Cross” as her name indicates. She moved from Judaism, through atheism, to Christianity.

In her biography, we find a poignant moment from the critical period in her life, in Breslau, when she was moving beyond Judaism. Before her official entrance into the Carmel of Cologne, she had to face her Jewish mother. Her mother said to her daughter: “Edith, you can be religious also in the Jewish faith, don’t you think?”

Edith responded: “Sure, when you have never known anything else.” 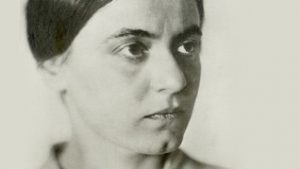 Then her mother desperately replied: “And you, why did you know him? I don’t want to say anything against him; certainly he was a very good man; but why did he become God?”

The last weeks at home and the moment of separation were very painful. It was impossible to make her mother understand even a little. Edith wrote: “And yet I crossed the threshold of the Lord’s house in profound peace.”

Like Edith Stein, we encounter Jesus and his cross, and we have known something else. We have met Someone else: the Man of the Cross. We have no alternative but to go to him. After Edith had entered the Cologne Carmel, she continued to write her great work on the cross: Kreuzwissenschaft – the science of the cross.

By 1938 the situation in Germany had deteriorated significantly, and the S.S. attack of November 8 (Kristallnacht) removed any lingering doubts about the true state of affairs of Jewish citizens. The Carmelite Prioress in the German Carmel arranged for Edith to be transferred to the Dutch convent at Echt, and on December 31, 1938, Edith Stein was driven across the border under the cover of darkness to Holland. There, at the Convent in Echt, Sr. Teresa Benedicta composed three acts of self-oblation, offering her life up for the Jewish people, for peace, and for the sanctification of her Carmelite family. She then settled into a life of teaching the postulants Latin and writing a book on St. John of the Cross. Edith’s sister Rosa had become a Catholic after their mother’s death in 1936, and in 1940 she joined Edith at the Echt Carmel as a Third Order Carmelite. 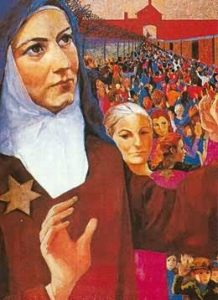 While the Nazi policy of exterminating Jews was rapidly implemented once Holland was occupied, Jews who professed Christianity were initially left alone. However, when the Catholic bishops in the Netherlands issued a pastoral letter in which they sharply protested against the deportation of the Jews, the Nazi rulers reacted violently by ordering the extermination of baptized Jews as well.

On Sunday, August 2, 1942, all Catholics of Jewish extraction in Holland were rounded up and arrested; two of whom were Edith and Rosa Stein. As neighbors gathered in horror at the door of the convent, they heard these last words of Edith Stein to her sister Rosa as the Nazis took them away: “Come, let us go for our people.” Given an opportunity to be released through her connection to the Catholic Church, Stein faithfully refused saying that Baptism should not be used as an unfair advantage; rather, she needed to share in the fate of her Jewish brothers and sisters.

The night between the 3rd and 4th of August, the prisoners are transported from Amersfoort to the Lager of Westerbork. The men were separated from the women, husbands from wives, mothers from their children, and any communication was forbidden. It was from the Westerbork Camp that Sr. Teresa Benedicta sent out a last cry for help. She telephoned Utrecht and tried to obtain a temporary stay. She had hoped that the Swiss consulate in Amsterdam could save her.

A good number of eyewitness accounts of Edith’s behavior during her days of imprisonment at Amersfoort and Westerbork spoke of her silence, her calm, her composure, her self-possession, her comforting and consoling of other women, her caring for the little ones, washing them and combing their hair and making sure that they were fed. Guards even said that she moved like an angel among those who lived in filth, squalor and unspeakable terror.

The Stein sisters were killed the same day they arrived, August 9, 1942, in the gas chamber of Auschwitz-Birkenau, and their ashes buried in a common grave or thrown into a nearby pond. Traveling with her, companions in suffering and martyrdom, besides her sister Rosa, Carmelite tertiary and doorkeeper at Carmel in Echt, are other acquaintances: Alice Reis, born in Berlin, whom Edith sponsored at baptism; Dr. Ruth Kantorowicz, journalist and librarian, of Hamburg, whom Edith knew since childhood. Ruth wanted to become a Carmelite nun in Maastricht, but was not accepted into the novitiate. She went into the Ursuline convent in Velno as an external helper, where she was captured on August 2nd, 1942.

Teresa Benedicta of the Cross was 51 years old at the time of her martyrdom. Even though her life was snuffed out during the Holocaust, her memory stands as a light undimmed in the midst of evil, darkness, and suffering. She is a symbol of the inherent unity between Jews and Christians. Dedicated to the good of all persons, she represents a moral force for all humanity.

On May 1, 1987, Edith Stein, a Carmelite nun and a victim of the Holocaust at Auschwitz, was beatified, along with Father Rupert Mayer, a Jesuit priest known for his resistance to the Nazis, during a Mass celebrated by Saint John Paul II in Cologne, Germany.

On October 11, 1998, in St. Peter’s Square, Saint John Paul II celebrated Mass during which he canonized Blessed Teresa Benedicta of the Cross, discalced Carmelite and martyr. In his homily, he asked that her witness might “reinforce even more the bridge of mutual understanding between Jews and Christians.” John Paul II called her “an eminent daughter of Israel and a faithful daughter of the Church.” He said:

“From now on, as we celebrate the memory of this new saint (every August 9), we cannot fail to remember from year to year the ‘Shoah’ (the Holocaust), that savage plan of exterminating a people, which cost the lives of millions of Jewish brothers and sisters.”

“Many of our contemporaries would want the Cross to be silenced. However, nothing is more eloquent than the Cross made silent! The true message of pain is a lesson of love. Love makes pain bear fruit and pain deepens love.”

On October 1, 1999, Saint John Paul II declared St. Teresa Benedicta of the Cross to be co-patron of Europe, along with St. Bridged of Sweeden and St. Catherine of Siena. John Paul said that together with the two great women, Teresa Benedicta represents that holiness that is for Europe “the secret of its past and the hope for its future.”

Collect of the Mass for Feast of St. Teresa Benedicta of the Cross:

God of our Fathers,
who brought the Martyr Saint Teresa Benedicta of the Cross
to know your crucified Son and to imitate him even until death,
grant, through her intercession,
that the whole human race may acknowledge Christ as its Savior
and through him come to behold you for eternity.

I am following with concern the increase of tensions that threaten to inflict a new blow to peace in Ukraine and call into question the security of the European Continent. Therefore, I propose that next Wednesday, 26 January be a day of prayer for peace.