A small city in military lockdown, an all-out war in the adjacent municipality against violent extremists, families in mourning after burying their dead, injured patients recovering in various hospitals, and some having to be amputated. Amidst all this, a local Church of the Apostolic Vicariate of Jolo is doing its best to provide hope to the Christian minority while their Muslim partners rally their members to show a force of unity amidst the fear and pain, which this impoverished city in the province of Sulu is suffering.
This was the scene when the Aid to the Church in Need (ACN) delegation visited the capital of the island of Jolo to express its solidarity with the victims just nine days after the fatal double bomb attack on the Cathedral of Our Lady of Mount Carmel on 27th January 27, 2019. This attack caused the death of 23 people, leaving 112 injured. ACN reported on its visit in an article February 8.
News of arrests and surrender of suspected perpetrators has failed to lift the spirit of the residents. Even with the assurance of tight security, a well-organized ‘Tribute to the Victims’ managed to draw only a fraction of the expected audience. Many opted to stay at home. A few of the families are seriously thinking of leaving Jolo for good. The bombing was the last straw, breaking their resilience in the face of years of threats, kidnapping, assassinations, and harassment by what they call “the forces of evil.” 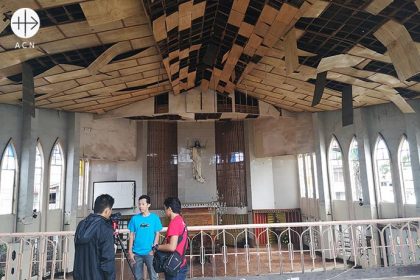 Fr. Jeff Nacua Rector of the Cathedral being interviewed by ACN.

The “forces of evil” are the Muslim extremists, mostly Abu Sayyaf supporters, who have been terrorizing Christian minorities for years. Among their crimes are the killing of Bishop Benjamin (Ben) of Jesus in February 1997 in the Cathedral and two other priests, Claretian Father Roel Gallardo kidnapped, tortured and murdered in 2002 and Father Rey Roda, Oblate of Mary Immaculate, in 2008. The victims of violence are not only Christians, because terrorists also kidnap Muslims with the intention of obtaining ransom to finance their actions.
Sources consulted by ACN name members of Ajang Ajang – a faction of Abu Sayyaf composed of drug traffickers and criminals, as the perpetrators of the latest attack at the headquarters of the Apostolic Vicariate of Jolo.
However, the messages from the military, local government, traditional leaders, lay partners visited by ACN are constant: the persecution was not done by Muslims but a small minority of violent extremists.
“No bullet or bomb can destroy the harmonious relationship between Muslims and Christians in Jolo,” states Fr. Romeo Saniel, OMI. He has lived on the island for 18 years and was appointed Apostolic Administrator of the Apostolic Vicariate of Jolo just a few weeks ago. As pastor of a small minority (one percent of the whole population of 120,000), he is revered and admired by the people for his commitment to provide quality education and opportunities to the young generation of Tausug  (Sulu’s indigenous ethnic group), as well as his courage and determination to reach out to the former fighters of the Moravian Islamic Liberation Front (MILF). 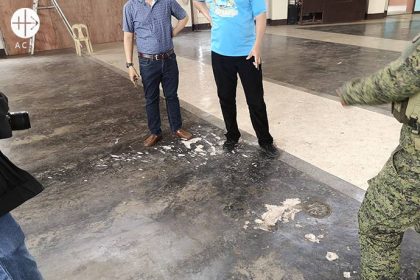 On the morning of January 27, 2019, two bombs exploded at the Roman Catholic Cathedral of Our Lady of Mount Carmel in Jolo, Sulu, in the Philippines.

“The only way for peace to be lasting is for both Muslims and Christians to stand together. We will not allow this tragedy to divide us and isolate us from the rest of the country,” remarks Datu Sakul Tan. As patriarch of a powerful political clan, he is considered the most influential man in the whole of Sulu, and he strongly believes in the relevance of quality education provided by the Catholic Church for the locals.
The needs are clearly articulated by the clergy and lay people. Even as the armed forces of the Philippines aim to eliminate the Abu Sayaf Group, everyone agrees that it doesn’t guarantee peace. Those who die will simply be replaced by the younger generation.
Fr. Saniel and Datu Sakul Tan both concur that a long-term need is to provide young people with programmes to prevent violent extremism through formal education, awareness campaigns, the creation of productive work for young people to provide them with livelihoods, and the development of sport.
On the other hand Fr. Jeff Nadua, OMI, Rector of the Cathedral, points to the need to rebuild the Christian community first and then rehabilitate the Cathedral. “We need to help our Christians recover from this trauma and see all this in the eyes of faith. Then we can focus our energies on rebuilding the structure which is heavily damaged by the twin bombing.” 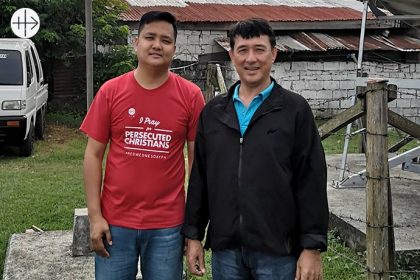 The National Director of ACN Philippines, Jonathan Luciano, paid a solidarity visit to the Apostolic Vicariate of Jolo on 4 and 5 February 2019.  He visited the seriously damaged Cathedral of Our Lady of Mount Carmel and spoke with the Apostolic Administrator, Fr. Romeo Saniel, OMI, as well as some relatives of the victims.

"Jesus, have mercy on me!" Let us make this prayer our own today. Let us repeat it. We must ask Jesus, who can do everything, for everything. He cannot wait to pour out his grace and joy into our hearts. #GospelOfTheDay