The Pope celebrated the largest Holy Mass ever to be held on the Arab Peninsula in Abu Dhabi. But what will be the result of the papal visit? Aid to the Church in Need (ACN) presented a view on February 11, 2019:
Gregory Fonseka is grateful: “I already experienced Pope Francis in Sri Lanka, my homeland. But I would never have thought that he would be celebrating Holy Mass here in Abu Dhabi. It has strengthened my faith in Jesus. Thank you, Pope Francis.” The local church in the United Arab Emirates is made up of people like Gregory, a foreign worker. The Catholic church has about one million members there. They are served by a total of nine parishes – a number that is of course far too small for so many people. They temporarily live and work in the country, which grants them the freedom to attend religious services, but not full religious freedom. This is no different for the citizens of the Emirates; they are prohibited from converting to Christianity or another religion. In theory, the renunciation of Islam is punishable by death, even if this punishment is not executed. Nonetheless, converts are under massive pressure from their families. Christian proselytizing is prohibited and punished with deportation.
In view of this, the Holy Mass celebrated by Pope Francis on Tuesday morning was something quite special. Pope Francis has in fact set a number of benchmarks simultaneously by holding the large Mass in Sheikh Zayed Stadium in the capital city of the Emirates. For the first time ever, a Catholic church leader has celebrated Holy Mass in the heartland of Islam, only a few hundred kilometers from Mecca. And it was not just any Mass, but the largest service ever to be celebrated on the Arab Peninsula. More than 160 000 Christians gathered in and around the stadium on the outskirts of Abu Dhabi. They cheered enthusiastically when the Pope was driven through the masses in an open car. The fact that the divine service was held on public property was another first. In this country where Islam is the official state religion, Christians may celebrate divine services within the confines of a church. Church bells and crosses that are visible from the outside are not permitted. However, the celebration of Holy Mass in a state-owned building, broadcast on television, attended by members of the government: that was something special. A gigantic cross hung resplendent over the altar. Thousands of Muslims were present when Pope Francis delivered a homily on the Sermon on the Mount as a roadmap for Christian life. The crowd applauded appreciatively when Bishop Paul Hinder thanked the crown prince of the Emirates for the opportunity to celebrate Mass in a public setting. “The ruling family is, in fact, taking a risk by allowing this,” a journalist from Abu Dhabi, who does not wish to be named, commented. “Islamic scholars in Saudi Arabia, for example, will not approve of the public celebration of Holy Mass on Islamic soil.” 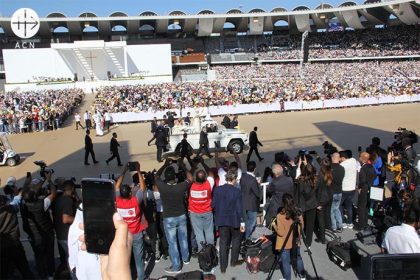 More than 160 000 Christians gathered in and around the stadium on the outskirts of Abu Dhabi.

But what will be the result of the papal visit? Will circumstances change for the better for the Christians living in the region? Bishop Camillo Ballin, the Apostolic Vicar for northern Arabia, is skeptical. Similar to the Apostolic Vicariate for Southern Arabia, the region Pope Francis has just visited, millions of Christians live as foreign workers in the region that is composed of Saudi Arabia, Qatar, Kuwait, and Bahrain. Religious freedom does not exist in any of these countries. In a talk with ACN in Abu Dhabi, Bishop Ballin commented, “The visit of the pope encourages Christians in the northern part of the Arab Peninsula to live their faith with even more conviction and to share human fellowship with Muslims. I am also certain that the interfaith meeting here in Abu Dhabi can foster a new mentality. But fundamental changes simply do not happen within 24 hours. I, therefore, do not expect any concrete improvements.” 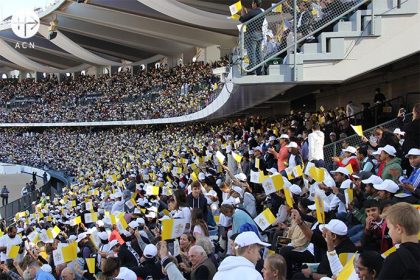 The fact that the divine service was held on public property was another first.

Cardinal Bechara Rai, patriarch of the Maronite Church, a Church that is united with Rome, is more optimistic. He considers the meeting between the Holy Father and leading representatives of Islam such as the Grand Imam of al-Azhar University to have been an important event for the relationship between Islam and Christianity. “Of course something will change, even in Saudi Arabia. There are no churches there and no public celebration of Mass. The meeting between the pope and the representatives of Islam will have consequences. But it will need time,” he told ACN.
George Samia, a young Catholic who traveled to Abu Dhabi from neighboring Dubai for the papal Mass, is very positive about the outcome. “The papal visit was an opportunity for non-Christians to learn more about Christianity and its message of love. It was wonderful. I am proud that I was able to be here for this historic event.”