Hot Topics
What Effect Will Dobbs Have in the International Debate on Abortion?
Nancy Pelosi Receives Communion During Mass in the Vatican (in Other Words, When the Eucharist . . . and the Pope Are Instrumentalized)
Summary of the Pope’s Apostolic Letter “Desiderio Desideravi” on the Liturgy One Year After “Traditionis Custodes”
Russell Crowe, Leading Actor of “The Gladiator,” Will Play the Role of Father Amorth, the World’s Most Famous Exorcist, in a Film
Harsh Measure: French “Word of Life” Community Is Dissolved, as Grave and Systematic Disfunctions Are Revealed
Zero Tolerance: Vatican Updates Vademecum Against Abuses of Minors in the Church
Pope Asks Neo-Catechumenal Way to Preach Jesus Christ with the Strength of the Spirit in the Church and with the Church”
Analysis: United States Supreme Court Rules against Abortion in the Country’s Constitution
Vatican: From Schindler’s List to Pope Pacelli’s List. This Is How Archbishop Paul Gallagher Explains the Vatican’s Documents Online on the Jews
Vatican Puts Online Archives on World War II and Persecution of Jews

BISHOP SAMSON SHUKARDIN, OFM, heads the Diocese of Hyderabad, one of Pakistan’s seven dioceses. It is home to 60,000 Christians, half of whom are tribal people. The diocese operates 56 schools, accommodating more than 13,000 students. Christians and other minorities in Pakistan face a range of challenges from fundamentalist religious groups. Bishop Shukardin spoke with Aid to the Church in Need on a recent visit to the US.

What has been the impact of the acquittal of Asia Bibi and her permission to subsequently leave the country?
The release of Asia Bibi is a big credit for the government. Pakistan’s Christians are very grateful to the present government. But there are a number of other cases like hers, but which do not draw the same publicity. This remains a big issue in the country. In the last 20-plus years, there have been more than 1500 cases of individuals charged under the blasphemy law, many of them from Muslim minority groups.

What are some of the most painful and damaging manifestations of radical Islam in Pakistan?
Islamic teaching is strongly projecting their way of life. In their view, there is no opportunity for other minority groups to live a normal life. Clearly, not all Muslims are fundamentalists. For the most part, Muslims are very good people. The painful thing is the blasphemy law and then there are kidnappings and forced marriages. Muslims believe that converting one person to Islam earns them eternal life. If an initial effort fails, people turn to kidnapping. Kidnappings and forced marriages are most common in rural areas, where people have little education. Minorities are also discriminated in the employment realm, which hurts the young in particular.

Why do these radicals hate Christianity so much?
The fundamentalists believe that Islam is the only complete religion—that salvation is only found in the Koran as the last holy book. They do believe in the Bible as a book from God because many things in the Koran are based on the Bible. There is respect for Jesus and Our Lady—this goes for fundamentalists and moderate Muslims alike. Christianity, however, is associated with the West and with the US, which is a major reason why Muslim extremists reject Christians and other minorities. If the West strikes against Muslims anywhere in the world, enraged fundamentalists in Pakistan often attack the churches. However, there are far more attacks on mosques than on churches—fundamentalist Muslims killing moderate fellow Muslims.

Are Christians afraid on a day-to-day basis?
Most of the minorities and in particular Christians are afraid of attacks and persecution.

What are the biggest needs of the Church in Pakistan?
We need more schools and financial assistance for poor families. We also need resources to help needy families send their children to college, which many cannot afford to do—let alone enabling them to pursue advanced degrees. Education is key for every nation aiming to transform society. 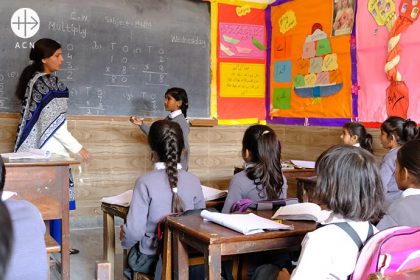 Are state-run schools a challenging environment for Christian students?
It all depends on where the school is and how it is run. Many minorities give their children Islamic names so they will not be singled out as Christians and become potential targets for discrimination in primary or secondary schools or at the college level. In many cases, minority students do suffer abuse in public schools.

Yet, despite all the hardship and threats, the faith of the Christian community is very strong. Churches are full on Sundays. How do you explain this?
In spite of all the hardship and discrimination, the Christian community is very strong in their belief system. The churches are full-on weekend celebrations and high holidays. The people are proud of their faith and the Church is the great source and encouragement of their faith.

Every time we open our hearts to Jesus, God’s blessing enters our lives.