In this difficult time, there is a need for words of peace and hope, which indicate a future for humanity overwhelmed by the pandemic. People feel the need to pray…

Prayer takes us out of our victimhood, opens our ears and hearts to the needs of those who suffer and pushes us to do something, because prayer is always at the root of peace…

It is time to rediscover a universal fraternity, to open our eyes to the many conflicts still in progress and to make a concerted invocation of all religious traditions rise to God…

In an exclusive interview with ZENIT in Rome, the President of the Community of Sant’Egidio, Marco Impagliazzo, gave these words of encouragement and comfort before Pope Francis later today, Oct. 20, will again participate in this year’s International Meeting on the theme “No One Is Saved Alone. Peace and Fraternity,” promoted by the Community of Sant’Egidio (presided over by Impagliazzo). Every year, the Meeting recalls the historic Day of Prayer for Peace convoked in Assisi by St. Pope John Paul II in 1986, with representatives of all the world religions.

Normally at the recent meetings, there were hundreds of leaders and representatives of the principal world religions gathered from more than 50 countries worldwide. This year, out of sensitivity to the COVID pandemic, the Ceremony to Pray for Peace will still take place in the afternoon at Rome’s iconic Campidoglio with interfaith leaders and important officials. The President of the Italian Republic, Sergio Mattarella will give an intervention. All who wish to follow along via streaming can do so by clicking this link. 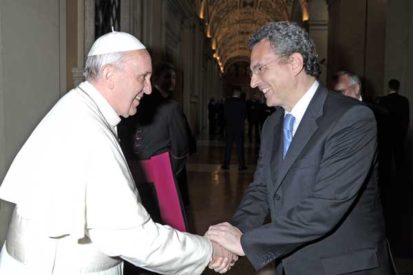 Every year since 1987, this Meeting to Pray for Peace has been held in a different city of Europe. While ZENIT traveled to cover recent meetings, including in Bologna and Madrid, this year, this year the Correspondent travels from the Vatican to central Rome, given that a year ago the Italian capital was decided as the 2020 location, prior to the outbreak of coronavirus.

In this interview, Impagliazzo speaks about the significance of this encounter taking place amid a pandemic and the release earlier this month of Pope Francis’ new social encyclical Fratelli Tutti. He also expresses his personal hopes for this year’s meeting and shares about the Pope’s repeated presence at this interfaith encounter, Francis’ collaboration with the Community and its local and international initiatives, and how this is not new, but goes back to his time as Archbishop of Buenos Aires.

“He has not changed since becoming Pope!” Impagliazzo tells ZENIT.

Here is the exclusive interview with ZENIT’s Senior Vatican Correspondent on the ground for the annual encounter held this year in the Eternal City:

ZENIT: This year’s Prayer for Peace happens in the midst of a pandemic. Why is this gathering, even if different than other years’, especially significant?

Marco Impagliazzo: The 34th interreligious meeting for peace in the Spirit of Assisi takes place this year amid the Covid-19 emergency in a single session, on the afternoon of October 20, in Rome on the Capitoline Hill. We strongly wanted this day of prayer for peace and we organized it in full compliance with all hygiene and health rules, because in this difficult time, there is a need for words of peace and hope, which indicate a future for humanity overwhelmed by the pandemic. People feel the need to pray, as we realized at the beginning of the spread of the coronavirus, in which everything was closed and many joined our prayer broadcast online every evening on the website www.santegidio.org . “Nobody is saved alone, peace and fraternity”: this is the title we have chosen, inspired by the words of Pope Francis in the unforgettable prayer last March 27 in St. Peter’s Square. It is time to rediscover a universal fraternity, to open our eyes to the many conflicts still in progress and to make a concerted invocation of all religious traditions rise to God.

ZENIT: This is the second time Pope Francis has been physically present at this annual interfaith encounter (now in Rome, and previously in Assisi). As President of the Community, how is the Pope’s clear closeness to the Community significant? After all, it is rare to have the Holy Father’s repeated presence at events, and not only has he done this, but has repeatedly collaborated with the community and through various initiatives….

Marco Impagliazzo: We are grateful to Pope Francis for the kindness and affection with which he follows so many initiatives of Sant’Egidio. We met him in Buenos Aires, when as archbishop he often went to visit our schools of peace in the Villas Miserias and presided over the liturgy for the community’s anniversary. He is a man of prayer, attentive to people, open to meeting everyone and passionate about the life of the peripherals. He hasn’t changed since becoming Pope! For this reason, his first trip out of Rome was to Lampedusa, the island in the Mediterranean, where many migrants lost their lives trying to reach Europe. And how can we forget his trip to Lesbos? In April 2016 from that Greek island, which has become a symbol of closure and unacceptance, Francis together with Patriarch Bartholomew – whom he will meet again tonight at the Campidoglio – wanted to send a message to Europe: do not forget those fleeing from war and suffering at the gates of our rich world. From Lesbos, he wanted to return to Rome with some Syrian families, welcomed in collaboration with Sant’Egidio, which had recently opened the way to salvation of the humanitarian corridors.

ZENIT: How is this year’s encounter significant in light of Fratelli Tutti, the Holy Father’s new Social encyclical on Human Fraternity and Social Friendship?

Marco Impagliazzo: From the encyclical Fratelli tutti comes the message that the crisis can only be overcome together. It is necessary to defeat the logic of ” save whoever can “, which – writes the pope – “will quickly translate into ‘all against all’, and this will be worse than a pandemic.” At the Campidoglio, the representatives of the various religions will give the example of a friendly, fraternal and supportive humanity, which chooses to stay together, despite the differences, to face the common enemy, which is the pandemic, but also violence, hatred, injustice, the throwaway culture of the elderly, the main victims of the virus. Of course there will be space for prayer each according to their own tradition, in different places, but then the religious leaders will converge together in the same place to indicate to the representatives of the institutions and politics, including the President of the Italian Republic Sergio Mattarella, the road to a future after the pandemic. There is in fact the risk of becoming discouraged, of being stunned and of closing up after these hard and difficult months that are causing a great economic and social crisis, which affects the lives of many people and has made everyone poorer. For this reason, the words of the prayer for peace will have a great meaning and will give everyone more courage not only to overcome this crisis, but also to give hope to those who have been most affected by this crisis.

ZENIT: What fruits do you hope this year’s encounter will offer the world?

Marco Impagliazzo: From the Campidoglio, the Pope and the representatives of all the Christian Churches and the great world religions will launch an appeal for peace and fraternity, while many wars are still going on in the world. I am thinking of Syria, a war that has dragged on for ten years in general indifference, while millions of people, including many Christians, have left the country, and in the north of Mozambique, a country that is so dear to us after the peace signed thanks to the mediation of Sant’Egidio, now hit by violent terrorist attacks by Jiahdists which have caused numerous victims and over 300,000 internally displaced persons. A special thought will go to South Sudan, a country for which Francis personally committed himself, receiving its leaders in Lent 2019, and for which Sant’Egidio has been working for years for national reconciliation. Last week, in Rome, an important disarmament agreement was reached, thanks to the Community initiative. To make peace, prayer and peace initiatives are needed.

Marco Impagliazzo: This prayer for peace is listening to the voices of the many who suffer from wars and the pandemic. Prayer takes us out of our victimhood, opens our ears and hearts to the needs of those who suffer and pushes us to do something, because prayer is always at the root of peace.

Tomorrow, Tuesday, is the official opening of the International Meetings of Prayer for Peace with the title “No one is saved alone – #Peace and #Fraternity ” organized by the Community of Sant'Egidio in #Rome , #Italy@m_abdelsallam @Pontifex @santegidionews pic.twitter.com/bsldhHvUJ2