Archbishop, you witnessed the moment when Karol Wojtyła was elected to the See of Peter. Could you please tell us a few words about the circumstances in which it happened and your reaction to the election?

In fact, we were many in St. Peter’s Square then, including many Poles. I was fortunate to be there with others and to witness this unique, historic moment when Karol Wojtyła’s name was announced. Apart from the normal emotion that accompanies such moments, the first thought that came to my mind was: This is something that happens only once in a thousand years for the Christian Nation, for the Poles, and it may never happen again.

Thinking about the situation in which the new Pope found himself, I wondered how he would deal with the whole Vatican machine. At the time it seemed that he was not as prepared to lead the Church as many Western cardinals were, but it turned out that this Pope did an excellent job, by pushing the entire administration of the Church into the background and devoting himself to Peter’s main task, namely teaching.

What began with Karol Wojtyla’s election as Pope developed into a beautiful program, the main theme of which was man. “+ Man is the way of the Church. +” And it all started with the Pope’s first encyclical, which began with these significant words Redemptor hominis. While the term Redemptor mundi or Redemptor generis humani usually emphasizes the universalism of Christ’s work of redemption, the Pope is talking about the Redeemer of man, because every man is the way of the Church. Now, precisely this raised this pontificate to an exceptionally high level.

Moreover, the Holy Father was truly fortunate and accompanied by the Holy Spirit, in the sense that he chose very strong cardinals who carried out the immediate work that he moderated and programmed.

Archbishop, did you already know Karol Wojtyła before he was elected, as a bishop and cardinal? Did you have the opportunity to meet him, to talk with him? What kind of man was he before he became Pope?

I got to know him at the yearly meetings on the feast of St. Wojciech in Gniezno. He usually came to Gniezno together with Cardinal Wyszyński, and once I had the opportunity to listen to his sermon. Usually, he celebrated the Holy Mass and Cardinal Wyszyński preached. I once saw him preach, and we were amazed because it was quite incomprehensible compared to what we heard from the Servant of God, Card. Stefan Wyszyński.

Then, I also met him at the Polish Institute in Rome and during a dinner in a wider group. All this made his character a bit more familiar. He was certainly characterized by such a special openness to other people. It is also interesting that, after being elected Pope, Cardinal Wojtyła became more understandable, that is, the thoughts he conveyed became easier. Less philosophical and more theological or theological-moral. We saw this breakthrough when Wojtyła came to our Institute as Pope and spoke to us. We were all impressed by the man’s courage, to which he referred during his installation as Pope. So, he had a strong personality, even though he seemed to be a warm person and could talk with anyone. Above all, however, he was certainly extremely brave, because he soon began to lead the Vatican with determination. 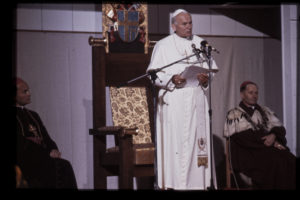 Archbishop, later you probably had many occasions to meet John Paul II, but was there one encounter, not necessarily known to the media, that you particularly remember?

Of course, we went to encounters for caroling and, later, on Ad Limina visits. During these visits, I was most surprised by the fact that he knew more about Poland than we did. Supporting his chin with his hand, he would nod – our explanations were of no use to him. In comparison with Pope Benedict or Francis, it is clear that John Paul II came to the universal Church from the experience of the Church in Poland.

If we tried to outline the main lines of the pontificate of John Paul II, how could you describe this 27-year period?

Following Fr. Prof. Andrzej Szostek, we can identify eight main lines in this pontificate. Namely: respect for the life of every person, respect for the family, the social doctrine, the proclamation of the Gospel to the whole world, religious dialogue and reconciliation, the new face of the unity of the Church, increasing closeness of the God rich in mercy, and the personal holiness of the Pope.

The first task that the Pope set for himself was to care for the respect for the life of every human being. Life is not just one good among many others, but it is the basis on which all other abilities and talents can be developed. Concern for the life of every human being entailed the Pope’s concern for the family in which a person is born, matures in love and loves. On the other hand, John Paul II’s social teaching called for every human being to have a chance to live in dignity and contribute in a creative way to the growth of prosperity. As far as dialogue with non-Christian religions is concerned, according to the Pope, it is an element of a missionary challenge that the Church cannot abandon, since she is called to proclaim the Gospel to the whole world. Religious dialogue and reconciliation are also important, because the division between Christ’s disciples is a scandal for the world and impoverishes the faithful of individual Churches by depriving them of the wealth that the piety of other Christian communities has developed over the centuries. This dialogue must also include non-Christians, primarily the followers of Judaism, our elder brothers in faith. The sixth matter is the Church’s unity. The Pope took several steps to preserve and strengthen it. A special topic for the Pope was mercy: St. John Paul II wanted to bring people closer to the God rich in mercy. Finally, the eighth theme is the Pope’s personal holiness. It is difficult to consider it as one of the lines of John Paul II’s pontificate, but without it, his teaching would not have been so powerful and would not have touched the depths of human hearts. Indeed, all the Pope’s words and actions were backed up by his personal holiness. And that is what gave strength to everything he said and did (cf. the Homily on the centennial of Karol Wojtyla’s birth in the Basilica of the Presentation of the Blessed Virgin Mary in Wadowice).

Let us, therefore, love St. John Paul II who lived faith that sees differently, hope that sees further, love that sees deeper. Among the changes taking place today and in which we sometimes lose the proper measure and assessment of things, matters, and people—as the Primate of the Millennium used to say—it is so easy to lose sensitivity for a man who, destressed by the material reality, has lost his proper dignity. At those times, one must lift God’s friends high to the heavens and say: “Look how honored God’s friends are.”

Archbishop, thank you very much for this wide panorama and the eight main lines of the pontificate. It is a wealth of knowledge and inspiration, because the 27 years of the pontificate and these main lines show the extraordinary richness of both the personality and work of John Paul II. Now, finally, a concluding question. You concluded with a reflection on the Pope’s personal holiness. Is there one thing about his personality, in its uniqueness, which today, perhaps in a special way, should be useful to us, so that we may imitate him and become better?

It seems to me that a focal point was his reverence for the Eucharist. The Holy Father restored the Corpus Christi processions in Rome. He led the processions from St. John in Lateran to the Basilica of St. Mary Major. Back then, when he was able to walk, and later when he could no longer walk, it was extremely edifying to watch his behavior and see how he revered the Eucharist. Now, I think that the whole Church needs that today.

Archbishop, thank you very much for this interview.

(Translation from Polish Original P. Nau/Office for Foreign Communication of the Secretariat of the Polish Bishops’ Conference)