(ZENIT News / Vatican City, 18.07.2022).- In view of the Apostolic Journey that the Holy Father will undertake to Canada from July 24-30, on Sunday, July 17, the Bishop of Rome took advantage of the world platform, which Saint Peter’s Square is, to send a message to the Canadian people. “Next Sunday, God willing, I will leave for Canada, so I now wish to address all the inhabitants of that country. Dear brothers and sisters of Canada, as you know I am coming among you above all in the name of Jesus to meet with and embrace the indigenous populations,” said the Pope.

And then he added:

Sadly, many Christians in Canada, including some members of Religious Institutes, contributed to the cultural assimilation policies that, in the past, gravely harmed in different ways the native communities. Hence I recently received in the Vatican a few groups representing the indigenous peoples, to whom I expressed my sorrow and solidarity for the harm they have suffered. And now I am about to undertake a penitential pilgrimage, which I hope, with God’s grace, may contribute to the path of healing and reconciliation already undertaken. I thank you in advance for the preparatory work and welcome you will extend to me. Thank you all! And I ask you, please, to accompany me with prayer.” 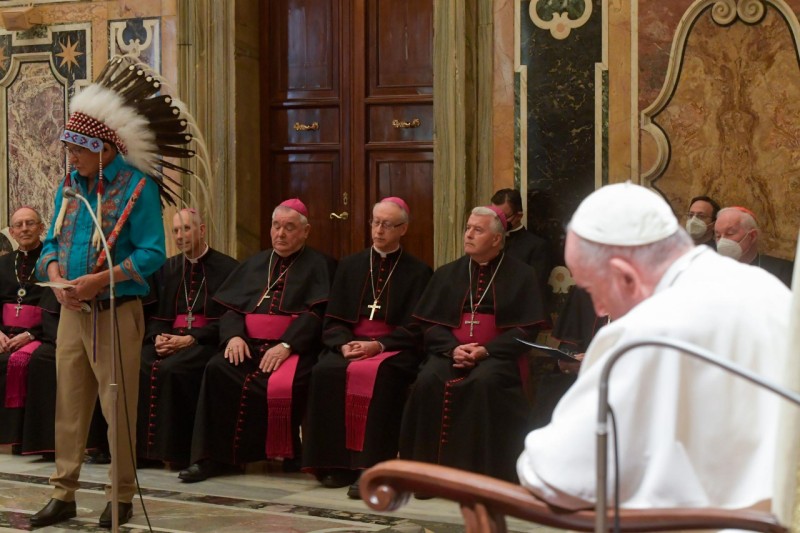 To the delegations of the indigenous peoples of Canada. Pope Francisco. Photo: Vatican Media

Planned in fact during the Pope’s visit are different meetings with Canadian Indians. On Monday morning,, July 25, he will meet with Metis and Inuit in Maskwacis, Edmonton. The meeting will continue in the afternoon. On Wednesday afternoon, July 27, he will meet in Quebec with Indians, the Diplomatic Corps and Civil Authorities. Then on Friday, July 29, he will leave Quebec for Iqaluit, where he will meet with former pupils of the residential schools and, subsequently, with elderly and young Indians.

Because of the indiscretion of a Jesuit, who published the Pope’s video in a private visit to a Jesuit community in Rome, it was learned that Pope Francis regarded this trip as an “easy trip.” Now the official qualification being used is “penitential pilgrimage.”