(ZENIT News / Rome, 16.07.2022).- The German newspaper Die Tagespost published a very interesting interview with the President of the Vatican Dicastery for Christian Unity (29.06.2022), Swiss Cardinal Kurt Koch. It’s an interview with the context of the war in Ukraine as background and focused on the current relations between the Catholic Church and the Russian Orthodox Church, with even more detail between the Pope and Patriarch Kirill.

Specifically how the internal fights in Russian Orthodoxy have contributed to the war in Ukraine, explains Cardinal Koch. “The internal tensions at the heart of the Orthodox are, undoubtedly, the background of the present situation in Ukraine and have increased the tension in relations between Moscow and Constantinople. But it would be lamentable if they had led to Ukraine’s terrible war or were used to legitimize it, because ecclesiastical conflicts must never be “resolved” by force. Ecumenical Patriarch Bartholomew wished to re-establish unity among Ukraine’s different Orthodox Churches; however, to date he has been only slightly successful. He had hoped that the majority of the Bishops of the Ukrainian Orthodox Church of the Patriarchate of Moscow (UOC-MP) would unite to this recently institutionalized Church, but this didn’t happen.”

Given that the initiative of the Patriarch of Constantinople, to recognize the autocephaly  of an Orthodox Church in Ukraine, was described by Moscow as an invasion that must be resisted, the Swiss Cardinal opined: “I can’t share this opinion, which moreover is contradicted by the terrible events that have taken place since February 24, given that in this war Orthodox members of the Moscow Patriarchate are also being killed in Ukraine and their churches are being destroyed.” 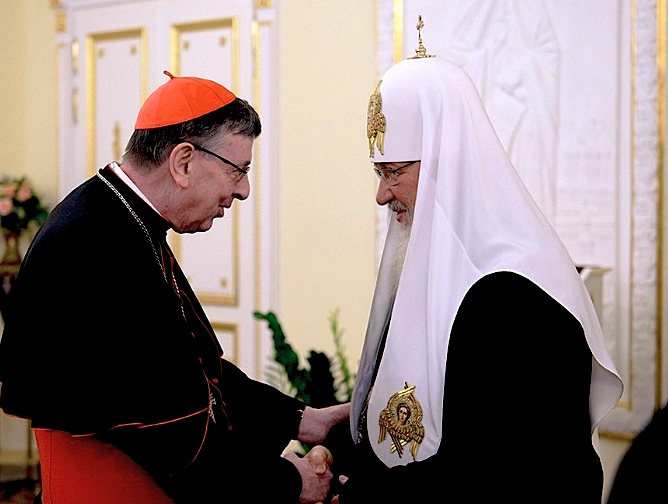 Then it was deepened and nuanced in the March 16 virtual meeting between Patriarch Kirill and Pope Francis. Asked if Pope Francis wished to speak to the Russian Patriarch’s conscience, Cardinal Koch answered:

“Planned in the second half of February was a Zoom meeting between Metropolitan Hilarion and me to continue preparing the second meeting between Pope Francis and Patriarch Kirill, foreseen for June. As the war in Ukraine had already broken out, I took advantage of the occasion of the Zoom meeting to present the request that the Pope and the Patriarch be positioned together against the war. Given that the Metropolitan proposed repeatedly a joint declaration on the persecution of Christians in today’s world, I stressed that I shared  this concern but that such a declaration would be completely implausible if not a single word was said against the fact that  –as in Ukraine– Christians are fighting against Christians and the Orthodox are killing one another. Shortly after this meeting, I received the answer that the Patriarch was not prepared for a joint declaration with the Pope. Just a few weeks later, Moscow requested a Zoom conference with the Pope.”

This response reveals that the meeting was Moscow’s initiative, not Rome’s. In fact, shortly after Moscow’s Patriarchate issued a press statement suggesting that the Pontiff shared Kirill’s view, Cardinal Koch answered for the first time in the context of the question on the instrumentalization of the Pope by Kirill:

“The Holy Father accepted the Zoom session, surely with the hope of contributing to a speedy end to the war. He stressed emphatically  that ‘we’ –the Pope and Patriarch– are not clergymen of the State but ‘Pastors of the people’, and that it must be their responsibility to put an end to the killing and destruction as soon as possible. Given that immediately after the Zoom meeting, the Russian Orthodox Patriarchate issued a press release stating that the Patriarch was grateful that the Pope and he had a common understanding in regard to the conflict in Ukraine, Rome had to state publicly what the Pope had really said. In various statements, the Holy Father energetically condemned the war in Ukraine, and asked for an end to it on several occasions.” 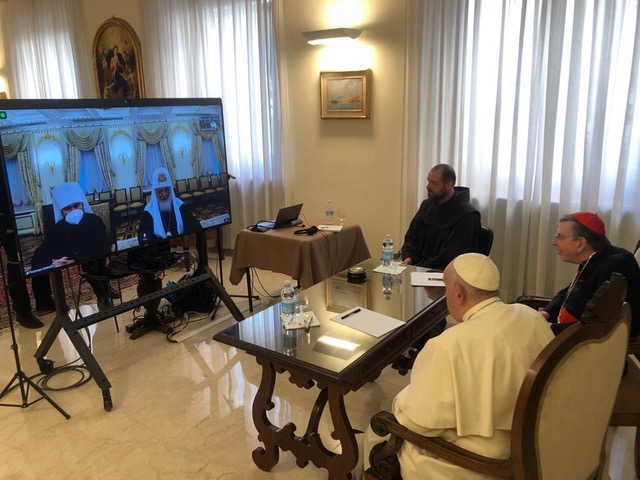 This situation led to a new question on the suitability of a non-Zoom meeting between Kirill and the Pope. Cardinal Koch replied to this stressing that the first meeting between the two religious leaders in Havana was in reality a step already advanced by Saint John Paul II:

“It should be mentioned that a meeting with the Head of Russian Orthodoxy had already been a great desire of Pope John Paul II. This meeting was agreed during the Second European Ecumenical Assembly held in Graz in 1997, but it was cancelled by Moscow shortly before. The fact that Pope Francis could then meet with the Russian Orthodox Patriarch for the first time in history was welcomed by public opinion with a certain euphoria and sparked the hope of improvement in their mutual relations. But the Havana meeting was already instrumentalized by Moscow in the fight with the Ecumenical Patriarch at the inter-Orthodox level. Despite this, it has not changed our relations with the Ecumenical Patriarchate, which, on the contrary, have continued and intensified. It’s clear to us that the Ecumenical Patriarch has the primacy of honour in Orthodoxy. And we have always respected his decision that the theological dialogue between the Catholic Church and the Orthodox Churches not be carried out bilaterally, but only multilaterally. Hence, there has never been a theological dialogue between Rome and Moscow, although Moscow desired it.”

Given that the President of the Dicastery for Christian Unity has said that there is no theological dialogue between the Catholic Church and the Russian Orthodox Church, the Cardinal was asked if there could be a specific ecumenical dialogue between both Churches: “On one hand, the doors must never be closed,” he answered, adding that there must “always be an open chink, otherwise nothing can be done. On the other hand, it’s lamentably impossible to predict how long the terrible war in Ukraine will last. If a new meeting is held between the Pope and the Patriarch at a time in which the war is still underway and Patriarch Kirill cluings to his indefensible justification of the war, the meeting would be exposed to grave misunderstandings, as it could be misinterpreted as the Pope’s support of the Patriarch’s position, which would seriously harm the Pope’s moral authority. I thank Pope Francis for cancelling the meeting with Patriarch Kirill in Jerusalem planned for mid-June.”

In fact, a meeting was planned in mid-June in Jerusalem, in the context of the Pontiff’s visit to Lebanon, a visit that was subsequently cancelled  for health reasons. However, a meeting in Kazakhstan was anticipated for September 2022.

Stephen Baier’s interview in the Tagespost also addresses questions, such as the difficulty that exists in the Orthodox world to understand the universality  and the papacy, and the difficulty the Catholic Church also has to understand the unclear distinction between Church and State that the Orthodox have. Referring to the papal primacy in the framework of the question whether it’s the last obstacle between Catholics and Orthodox, Cardinal Koch said:

“The main topic of the theological dialogue between the Catholic and Orthodox Churches is the relationship between synodality and primacy. In this connection, we were able to take an important step in 2007 with the Ravenna Document. This Document expresses the conviction  that synodality and primacy are interdependent and that the Church needs a protos, a first, at all the levels of her life: local, regional and universal. The fact that Catholics and Orthodox can say together that a protos is also necessary at the universal level of the Church was an important step.

It’s true that this point of view was acknowledged by the Russian Orthodox Patriarchate, which in fact published its own Document on the universal primacy, which differs largely from the Document of the International Mixed Commission. But in this dialogue also there was no exchange of opinions on the biblical vision of Peter and his position in the circle of the Twelve. Rather, there is talk of primacy in a quite abstract sense. However, a purely functional view of the primacy isn’t sufficient.

We, Catholics, are convinced that with the ministry of the Successor of Peter we have received a precious gift of the Lord, which we must not keep for ourselves, but transmit, because we see in it an important service to unity. In his Encyclical on the ecumenical commitment [Ut Unum Sint] Pope John Paul II expressed the conviction that the ministry of the Successor of Peter is a ministry of unity and that it is also manifested above all in ecumenism.” 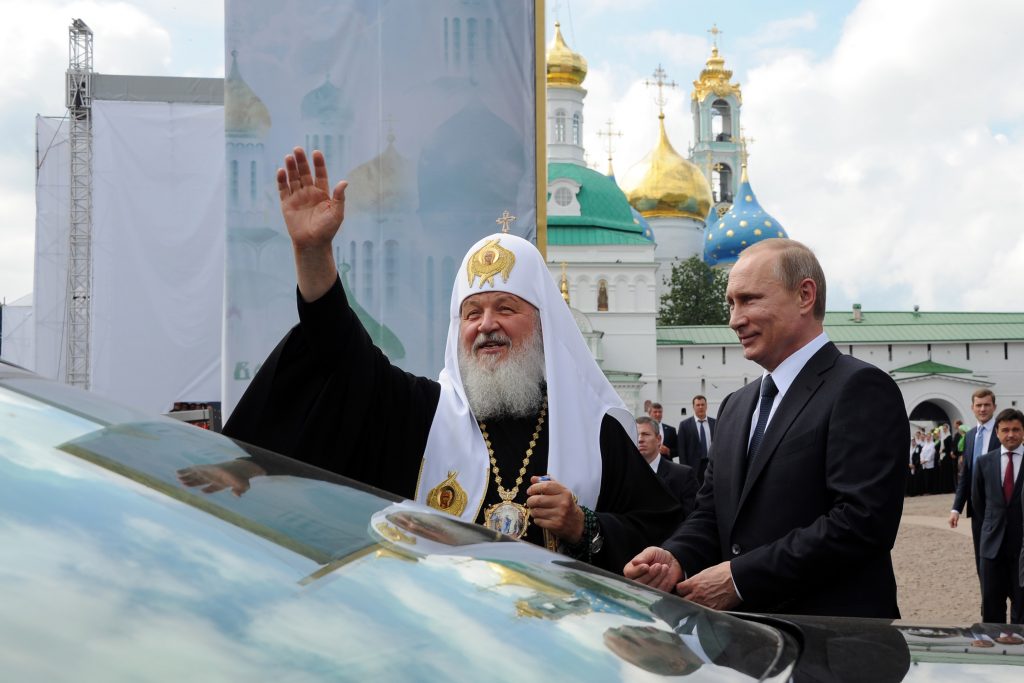 Evidencing that, perhaps, what the Orthodox world is lacking is the principle of unity, the Swiss Cardinal said. “Metropolitan Hilarion has repeatedly criticized the Ecumenical Patriarch for not behaving as an Orthodox Pope. It’s certainly not a friendly statement to us, Catholics, when the word “Pope” is used as a negative label. If the Russian Orthodox Patriarchate does or does not recognize the primacy of honour of the Ecumenical Patriarch and his competency to confer autocephaly, it’s not for me to judge him, but it must be discussed among the Orthodox.”

Finally, to the question on the ecumenical dialogue, Cardinal Kurt Koch answered that it’s being dissolved in  many “dialogues.”

“Orthodoxy has decided to carry out a theological dialogue with the Catholic Church at the multilateral, not bilateral, level. This decision is binding for me. The formula with which it wants to dialogue with us in the future is the responsibility of Orthodoxy. If the dialogue is carried out only at the bilateral level, I fear it would create even more tensions within Orthodoxy. We cannot nor should we find unity between the Catholic and Orthodox Churches  by dividing Orthodoxy itself. To strengthen unity within Orthodoxy must also be a concern of ours, especially in the current and very difficult situation of global Orthodoxy.”

The interview published originally in German, can be consulted at this link.