Hot Topics
Nine Months After the Invasion of Ukraine, Pope Writes to the Ukrainian People
Cardinal Dolan and Bishop Robert Barron warn Senate that LGBT law puts Church at risk of discrimination
First statements of the Commissioner for Caritas appointed by the Pope
Women Are Taking On More Important Positions in the Roman Curia
World Jewish Congress announces launch of ‘Kishreinu’ (Our Bond) Initiative with catholics
Pope Francis Explains Spiritual Consolation in Nine Specific Points
“Let Us Do All that Is Humanly Possible to Put An End to War,” Pope’s Address to The World Jewish Congress
Pope’s Swatch Watch Up for Auction for Charity
The Holy Father appoints a Temporary Administrator to relaunch Caritas Internationalis and its service
An Italian Is the New Prefect of the Vatican Dicastery for the Oriental Churches

(ZENIT News / Flight to Canada, 24,07.2022).- The flight that took the Pope to Canada left Rome’s Airport at 9:16 on July 24. The Holy Father left Casa Santa Marta in the Vatican shortly before 8:00 am. He was put on the plane with an elevator, given his need of a wheelchair. 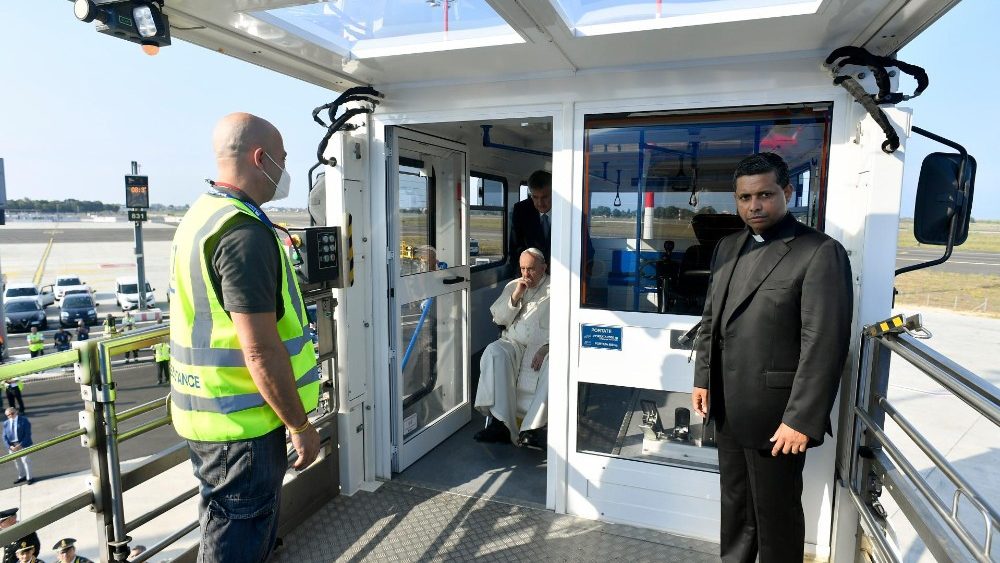 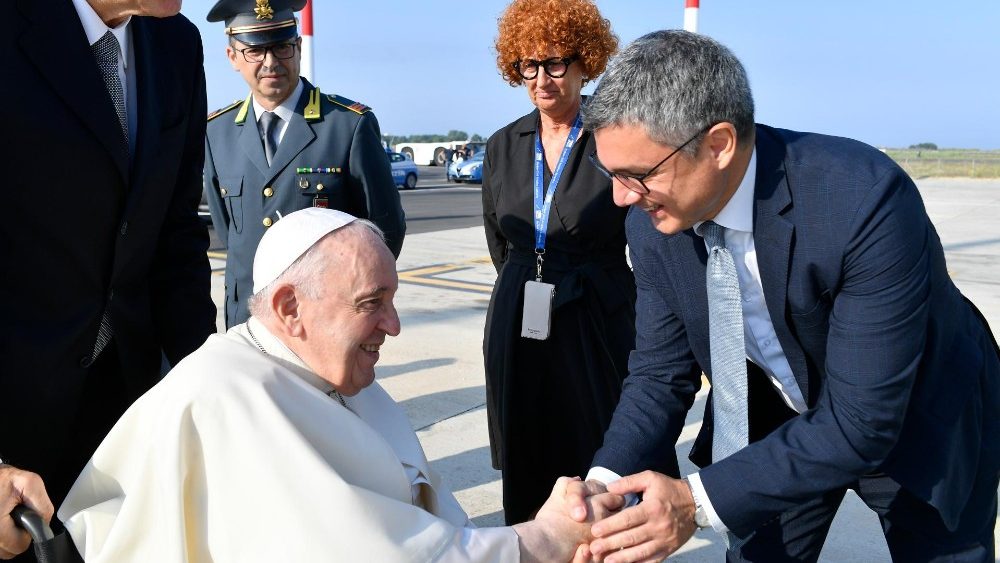 On the Ita Airways flight (the airline that substituted Alitalia), the Holy Father greeted the journalists accompanying him on the trip. “Welcome, happy Sunday to all! Thank you for this service and also for this venture: I live it as a venture . . . Thank you for your work. I’d like to greet you as always. I think I can do it, we can go,” the Pope said to them. Then he went down the aisle greeting them without the need of the wheelchair.

Subsequently, he warned them: “Let’s be careful on this trip: as [Matteo Bruni] said, it’s a penitential trip, let’s undertake it in this spirit.” Then he invited them to pray the Angelus. All on the plane prayed the Marian prayer, including the non-Catholics. 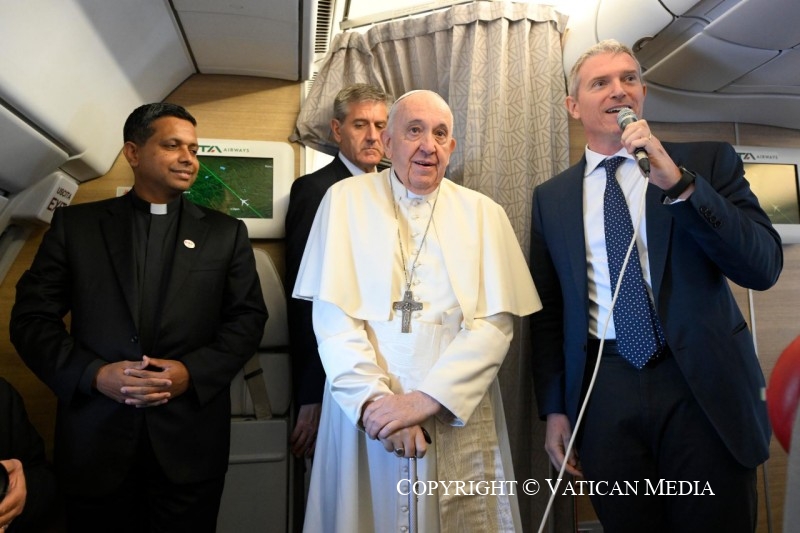 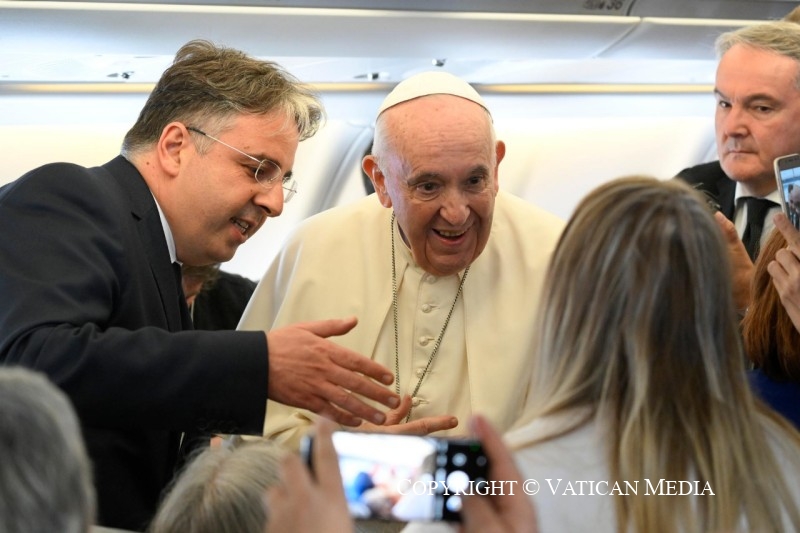 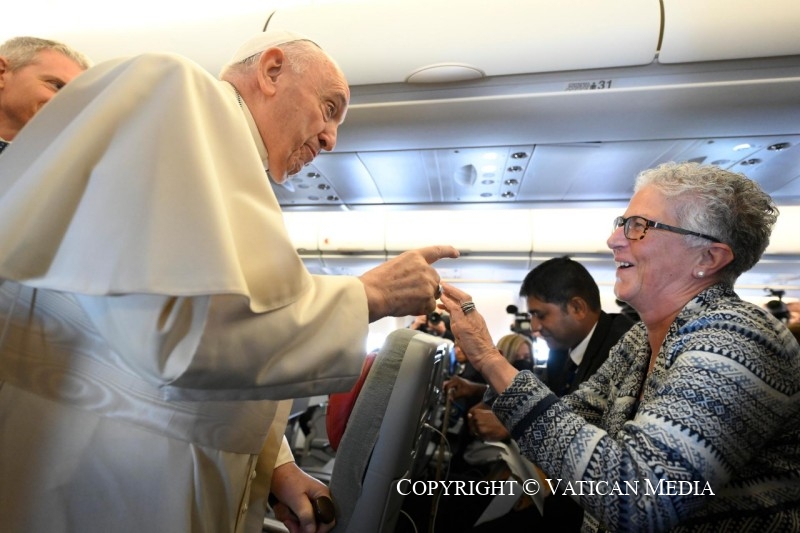 The Holy Father then remembered grandparents as celebrated on Sunday, in fact, was the World Day of the Elderly and of Grandparents:

“It’s Grandparents’ Day: grandfathers, grandmothers who have transmitted the history, the traditions, the customs and so many things. Today we need to return to grandparents –I’ll say it as leitmotiv–, in the sense that young people must have contact with their grandparents, to go back to them, to return to their roots, not to stay there, no, but to go forward, as a tree that draws strength from its roots and takes it forward in flowers and fruits. I always remember that poem of Bernárdez: all that the tree has as flowers comes to it from what is buried, [the roots], as grandparents are”

And Pope Francis had a special thought for some “special grandparents”:

The Pope concluded saying: “Each one of us has grandfathers and grandmothers; some are no longer here, others are alive. Let us remember them today in a special way. We have received many things from them, in the first place, our history.”

The almost ten and a half hours that the trip lasted gave the Pontiff the opportunity to send greeting telegrams to the Heads of State and Government of the countries he flew over: Switzerland, France, the United Kingdom, Iceland and Denmark.

During this #Advent Season, let us ask the Lord to help us keep the lamp of faith alit in our lives, to be prepared to receive him, and that he fill us with peace and joy.

Women Are Taking On More Important Positions in the Roman Curia