ZENIT News / Vatican City, 16.08.2022).- On Wednesday morning, August 17, in the presence of thousands of people gathered in the Vatican’s Paul VI Hall for the General Audience, the Pope imparted his 17th catechesis on old age, on that which reaffirms the destiny of life. Here is the text of the catechesis, translated into English by ZENIT, with headers in bold added also by our Agency. The catechesis, as is readily understood after the reading of the first lines, began with the reading of a fragment from the Book of the Prophet Daniel.

1st.The presentation of a God who calms and gives security and the disappearance of the barrier of fear

The words of Daniel’s dream, which we have been listening to, recall a vision of God that is at the same time mysterious and brilliant. It is taken up again at the beginning of the Book of Revelation, which refers to the resurrected Jesus, who presents himself to the seer as Messiah, Priest and King, eternal, omniscient and immutable (1:12-15). He puts his hand on the shoulder of the Seer and calms him: “Fear not! I am the First and the Last, and the Living. I was dead but I now live for ever” (vv. 17-18). Thus the last barrier of fear and anguish disappears, which the theophany has always aroused: the Living calms us, gives us security. He also died, but he now occupies the place destined for him: as the First and the Last.

2nd. God’s lordship over history and His relation with old age

In this intertwining of symbols –there are so many symbols here– there is an aspect that perhaps will help us to understand better the connection of this theophany, this apparition of God, with the cycle of life, the time of history, God’s lordship over the created world. And this aspect has to do, in fact, with old age. What does it have to do with? Let’s see. 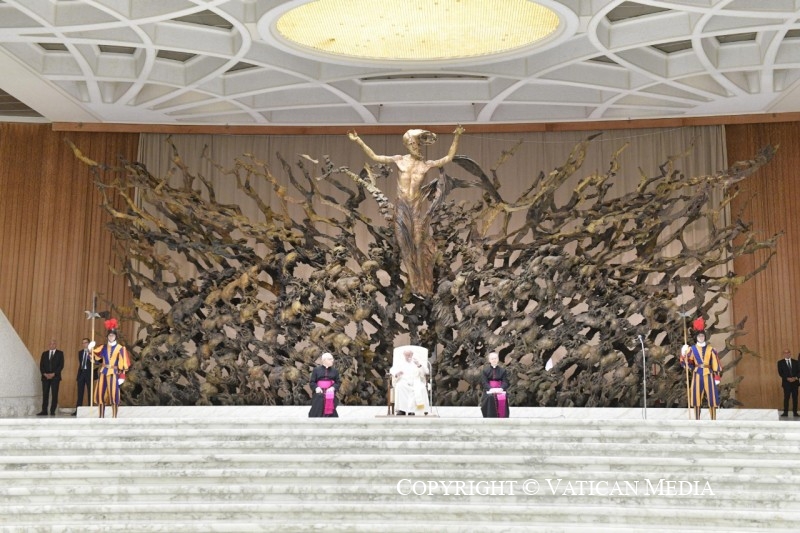 The vision transmits an impression of vigour and strength, nobility, beauty and enchantment. The clothes, the eyes, the voice, the feet everything is splendid in that vision: it’s the vision! His hair, however, is white, as wool, as snow, as that of an old man. The most common biblical term to refer to an old man is ‘zaqen’: of ‘zaqan,’ which means ‘beard.” The hair white as snow is the ancient symbol of a very long time, of an immemorial past, of an eternal existence. One must not demystify everything with children: the image of an elderly God with hair white as snow is not a silly symbol, it’s a biblical image, it’s a noble and also tender image. The figure found between the gold candelabra in [the Book of] Revelation coincides with that of the figure of the “Ancient of Days” of Daniel’s prophesy. He is as ancient as all of humanity, but even more so. He is as ancient and as new as God’s eternity. Because God’s eternity is thus, ancient and new, because God always surprises us with his novelty; He always comes to us, every day in a special way, for that [particular] moment, for us. He is always being renewed: God is eternal, He is for ever, we can’t say that there is as an old age in God, He is not so, but is eternal, He is renewing Himself.

4th Jesus, His encounter with the elderly and the special figure of Simeon

In the Eastern Churches the feast of the Encounter with the Lord, celebrated on February 2, is one of the twelve great feasts of the Liturgical Year. Highlighted is the encounter of Jesus with the elderly Simeon in the Temple; it highlights the encounter of humanity, represented by the  vigilant Simeon and Ana, with the little Lord Christ, the eternal Son of God made man. A beautiful icon of it can be admired in the mosaics of Santa Maria in Trastevere in Rome.

The Byzantine Liturgy prays with Simeon: “This is the one born of the Virgin: He is the Word, God of God, who became flesh for us and saved man.” He continued: “May the Door of Heaven open today: the eternal Word of the Father, having assumed a temporal beginning, without leaving His divinity, is presented by His will to the Temple of the Law by the Virgin Mother, and the vigilant takes him in his arms.” These words express the profession of faith of the four first Ecumenical Councils, which are sacred for all the Churches. But Simeon’s gesture is also the most beautiful icon of the special vocation of old age: looking at Simeon we look at the most beautiful icon of old age: to present children who come into the world as an uninterrupted gift of God, knowing that one of them is the Son generated in the very intimacy of God, before all ages. 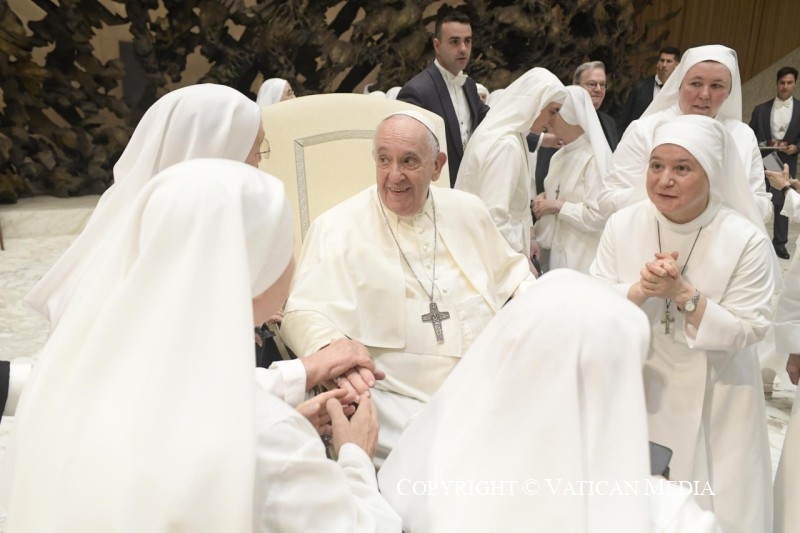 Old age, in its journey to a world in which the love of God has put it in Creation can finally radiate without obstacles; it must do this gesture of Simeon and Ana, before taking its leave. Old age must give witness to children of its blessing” it consists of its initiation — beautiful and difficult — in the mystery of the destiny of life that no one can annihilate, not even death. To give witness of faith to a child is to sow life; to give witness of humanity and of faith is also the vocation of the elderly. To give children the reality the elderly have lived is a testimony; it is to give witness. We, elderly, are called to it, to give witness so that the children will carry it forward.

7th The capacity of the elderly’s credible testimony

The elderly’s testimony is credible for children: young people and adults are not able to make it so authentic, so tender, so moving, as the elderly, as grandparents can. When an elderly person blesses the life coming to him, leaving aside all resentment for the life that is going, he is irresistible. He is not embittered because time passes and goes, no. He has the joy of that good wine, of the wine that has become good with the years. The testimony of the elderly unites the ages of life and the very dimensions of time: past, present and future, because they are not only a memory but are the present and also the promise. It is painful –and harmful– to see the ages of life conceived as separate worlds and in competition, each one trying to live at the expense of the other. This is an error. Humanity is ancient, very ancient, if we look at the hour of the clock. However, the Son of God, who was born of woman, is the First and the Last of all times. It means that no one is left outside of His eternal generation, of His wonderful power, of His loving closeness.

The alliance –and I say alliance– the alliance of old people and children will save the human family. There is a future when children, when young people talk with the elderly. If this dialogue doesn’t exist between old and young people, the future is not clear. The alliance of the elderly and children will save the human family. Can we give back to children, who have to learn to be born, the tender testimony of the elderly who have the wisdom of death? Will this humanity that with all its progresses seems to us an adolescent born yesterday, be  able to recover the grace of an old age, which encloses the horizon of our destiny? 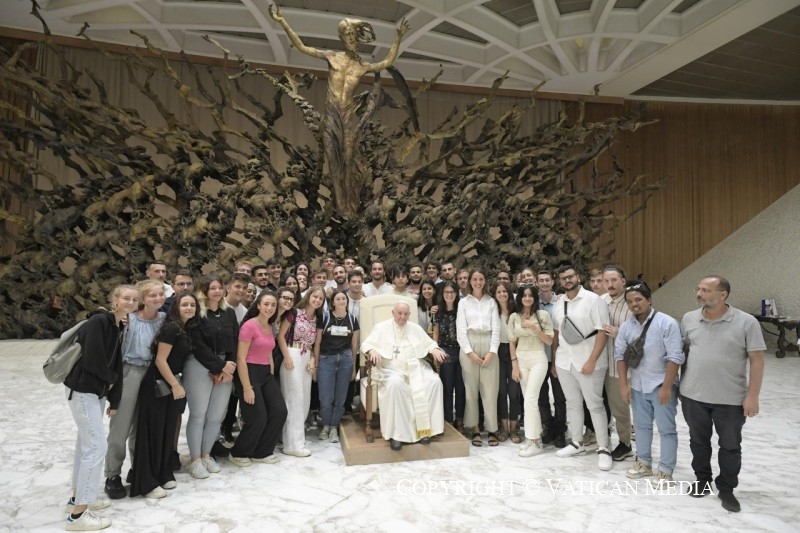 9th The beauty of life without an expiry date

Death is certainly a difficult passage in life for all of us. We all have to go there, but it’s not easy. However, death is also the step that closes the time of uncertainty and disconnects the clock: it’s difficult because it’s the step of death. Because the beauty of life, which no longer has an expiry date, begins in fact in that moment. But it begins with the wisdom of that man and that woman, the elderly, who are able to hand over the baton to young people. Let us think of the dialogue, in the alliance of the elderly and children, of the elderly with young people, and let us see to it that this link isn’t broken. May old people have the joy of talking, of expressing themselves with young people, and may young people seek old people to draw from them the wisdom of life.