(ZENIT News / Kiev, 24.08.2022).- At least 16% of children confirmed killed in Ukraine since the war escalated six months ago were under the age of five, Save the Children said today.

Between February 24 and August 10, at least 942 children were killed or injured in Ukraine – an average of five children every day— with 356 children losing their lives and 586 wounded, according to data from the Office of the United Nations High Commissioner for Human Rights (OHCHR).

The UN has said that the total number of casualties is likely to be much higher than those currently verified and the exact ages of all child casualties are not all known. Most of the verified child casualties were due to the use of explosive weapons in populated, urban areas.

In the once bustling city of Kharkiv, relentless shelling and bombing reportedly damaged more than 600 buildings in the first month of the war, according to city officials, including nurseries, schools and health care facilities.

Dana*, 29, and her daughter, Antonina*, 2, fled Kharkiv in March at the peak of the city’s bombardment. Before they managed to escape the city, they took refuge in a cellar as the sound of air aids could be heard overhead.

“She heard all the explosions and was afraid; she couldn’t sleep. When the same thing happens here, she is scared and asks: ‘Something went boom, mom. What just went boom?’” said Dana. “With a child that’s only two-and-a-half years old, I can’t just explain to her that there’s a war going on and children are dying. She’s too small.” 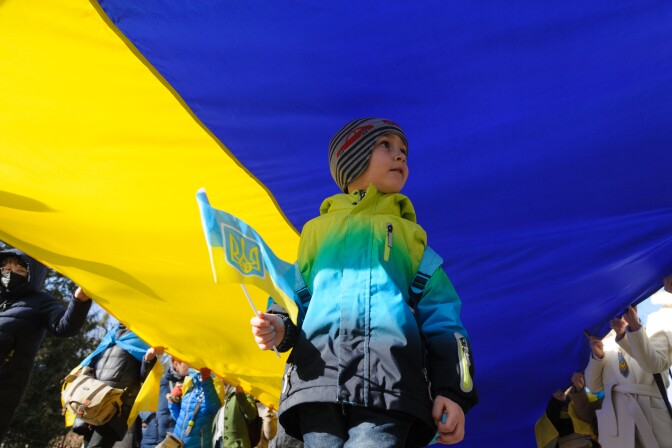 Instead, she tells her daughter that the loud booms are thunder. But this tactic doesn’t work for her older nieces and nephews who are more aware of what is happening.

“They ask a lot of questions. One of my nephews is nine and he asks: “Will I die as well?” His parents try hard at picking the right words to give him an answer,” said Dana. “My five-year-old niece asks ‘When I grow up, will I still be running to the hallway when there’s a siren?’ So, they understand [that this isn’t normal].”

Children in parts of the country are growing up on the frontlines of brutal warfare as urban areas are used as battlefields, leading to deaths and life-changing injuries, and destroying infrastructure needed to guarantee access to life-saving food and water.

Millions of children from Ukraine have fled their homes, with an estimated 3.1 million children living as refugees in neighbouring countries. About 3 million children are believed to be internally displaced inside Ukraine.

Save the Children’s Country Director in Ukraine, Sonia Khush, said: “Although children in Ukraine have nothing to do with the causes of the war, they are the ones most affected by it. They are growing up to the sound of bombs and shelling, and to the sight of their homes being destroyed, their schools damaged and their friends and family members being killed or injured.”