(ZENIT News / Camerun, 21.09.2022).- Five priests, a nun, and three lay people have been abducted in Nchang, south-west Cameroon, after attackers set fire to a church on Friday (16th September).

Bishop Aloysius Fondong Abangalo of Mamfe, the diocese where the assault on St Mary’s Catholic Church happened, sent a video message to Catholic charity Aid to the Church in Need (ACN) after he visited the church’s ruins to rescue the Blessed Sacrament.

He said: “What happened here is an abomination. I think they have not been satisfied trying the patience of men, and now they are trying the patience of God. It is a terrible thing to wrestle with the Lord. May God have mercy on us for this abomination, we should all go down on our knees and ask for pardon for the sins which were committed.” He added: “I came here to get the Blessed Sacrament out of the church, to keep it safe, and take it back to bishop’s house.”

Bishop Abangalo appealed to the attackers, saying: “No human sin is more powerful than God’s mercy. Whatever they are doing, they should know that they are children of God, and they should know that the Lord is ready to forgive them. What you did is not correct, you are depriving people of something beautiful. Let us pray. I call on them to realise that whatever pain they are going through is our pain, but we have to work together and use the right means to resolve the problem. Violence only begets violence, and nobody can dare to wrestle with God.” 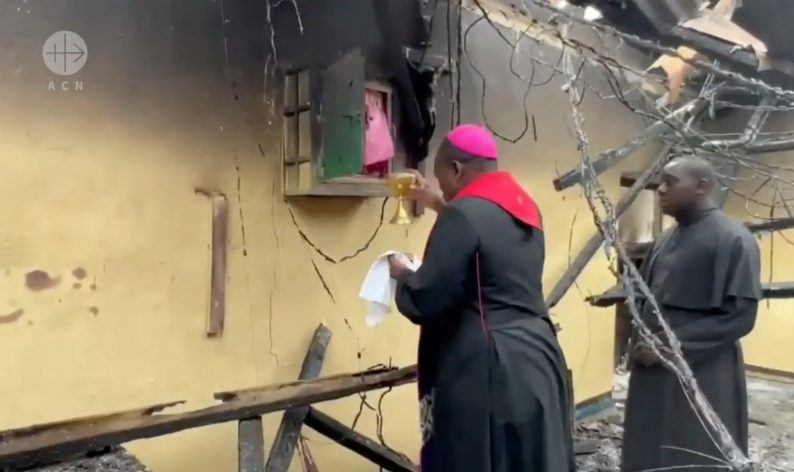 The Catholic bishops of the Bamenda Ecclesiastic Province issued a statement following the attack, saying the Catholic Church has been regularly targeted by fighters.

They said: “A wave of persecutions against the hierarchy of the Church is now the new game of the ‘Struggle’, and all kinds of threat messages are sent out against missionaries who have surrendered their lives to work for the people”.

In the last five years, ACN has supported 24 projects in the diocese of Mamfe, including a one-year programme of education for peace, aimed at the young.

Bishop Abangalo finished saying: “Remember us in your prayers”.