(ZENIT News / Vatican City, 02.11.2022).- At the end of the Eucharistic Concelebration in Saint Peter’s Basilica, in suffrage for the Cardinals and Bishops who died this past year, the Holy Father Francis went privately to the Teutonic Cemetery located inside the Vatican.

The Pope paused for a few moments in personal prayer. He was accompanied by the Sisters Handmaids of Christ the Priest, nuns who look after the cemetery, as well as the Rector and Vice-Rector of Saint Mary’s Pontifical Teutonic College in the Cemetery. After his silent prayer, the Pontiff blessed the tombs with the aspergillium and then returned to his residence, Casa Santa Marta. 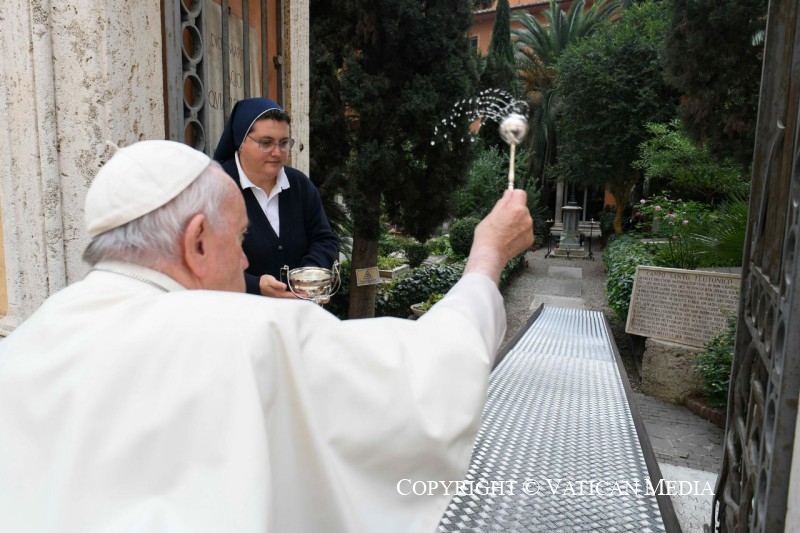 The Teutonic Cemetery is a burial site adjacent to Saint Peter’s Basilica in Vatican City. It is the oldest German foundation in Rome. In ancient times, it was the site of Nero’s circus, which was the scene of numerous Christian martyrdoms.

This German property, near Saint Peter’s tomb, has been here for 12 centuries. Mentioned for the first time in the year 799 was a Schola Francorum, which has a tile image of Charlemagne as Founder on the wall of the building. However, the place acquired more precise contours in the mid 15th century, when the Holy Year of 1450 attracted many pilgrims to Rome.

On that occasion, the Cemetery and the Church, which were greatly reduced, were rebuilt and the German members of the Curia came together in the Confraternity of the Deceased Poor, which still exists today, although somewhat altered, and is the foundation’s owner. In the last quarter of the 15th century, the present Church was built in the very common style in Germany of the hall church. In 1597 the Confraternity was promoted to the “Archconfraternity of Our Lady of the German Cemetery in Saint Peter’s.” Added, since 1876, is a College for priests studying Christian archaeology, Church history and similar disciplines. Located there as well since 1888 is the Roman Institute oof the Görres Society, with a library housing some 35,000 volumes. 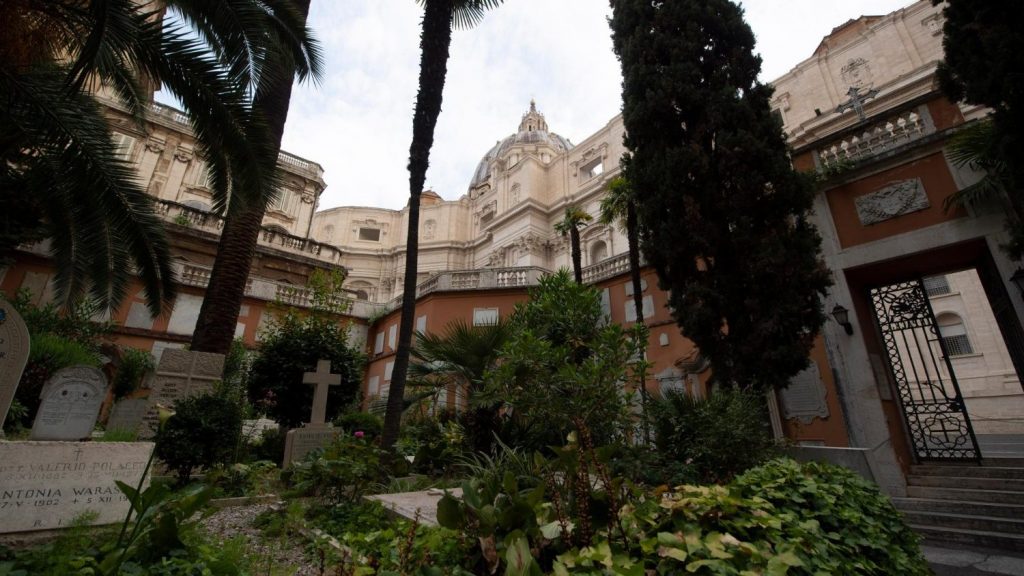 After the sacking of Rome, the Swiss Chapel became the burial place of fallen Guards. The very fine frescoes on the walls are the work of Polidor Caldara, a disciple of Raphael.

Given its special location, the Cemetery is a burial place in great demand. According to the Statutes, members of the Archconfraternity, members of many Religious Houses of German origin and of the two other German Colleges of Rome  –the Anima and the Germanic–, have the right to be buried there. Innumerable dead, both famous and unknown, are buried  in this Cemetery. Prayer, logically, is for all, but the visitors usually look for specific tombs of famous dead of the ecclesiastical, artistic, political and diplomatic realms.