He was elected in the fourth round of voting and spoke briefly from the balcony at St. Peter’s Basilica:

After the great Pope, John Paul II, the Lord Cardinals have elected me, a simple, humble worker in the Lord’s vineyard. I am consoled by the fact that the Lord is able to work and act with insufficient instruments and, above all, I rely on your prayers.

In the joy of the risen Lord, confident of his permanent help, let us go forward. The Lord will help us. Mary, his Most Holy Mother, is on our side. Thank you.

During his first Wednesday general audience in St. Peter’s Square on April 27, 2005, he explained why he chose “Benedict”:

After The Holy Death Of My Venerated Predecessor, John Paul II, The Traditional Wednesday General Audiences Are Resumed Today. In This First Meeting, I Would Like First Of All To Reflect On The Name I Have Chosen When Becoming Bishop Of Rome And Pastor Of The Universal Church. I Wished To Call Myself Benedict XVI To Be United Ideally With The Venerated Pontiff Benedict XV, Who Led The Church In A Troubled Time Because Of World War I. He Was A Courageous And Authentic Prophet Of Peace And He Did His Utmost With Strenuous Courage From The Start To Avoid The Drama Of The War And Then To Limit Its Inauspicious Consequences. Following His Footsteps, I Wish To Put My Ministry At The Service Of Reconciliation And Harmony Among Men And Nations, Profoundly Convinced That The Great Good Of Peace Is, First Of All, A Gift Of God, A Fragile And Precious Gift To Be Invoked, Defended And Built Day After Day With The Contribution Of All. 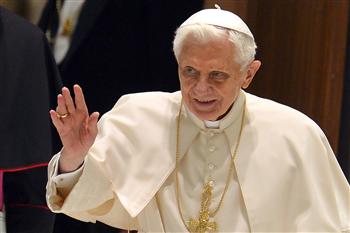 The Name Benedict Evokes, Moreover, The Extraordinary Figure Of The Great “Patriarch Of Western Monasticism,” St. Benedict Of Nursia, Co-Patron Of Europe Together With Saints Cyril And Methodius. The Gradual Expansion Of The Benedictine Order Founded By Him Has Had An Enormous Influence On The Spread Of Christianity On The Whole Continent. Because Of This, St. Benedict Is Much Venerated In Germany And, In Particular, In Bavaria, My Native Land. He Constitutes A Fundamental Point Of Reference For The Unity Of Europe And A Strong Reminder Of The Inalienable Christian Roots Of Its Culture And Its Civilization

Pope Benedict XVI resigned the Papacy in February of 2013, citing his advanced age and limited strength.

If we lose our memory, we destroy our future. May the anniversary of the Holocaust, the unspeakable cruelty that humanity learned of 75 years ago, serve as a summons to pause, to be still and to remember. We need to do this, lest we become indifferent. #DayofMemory

God’s Word consoles and encourages us, it challenges us, frees us from the bondage of our selfishness and summons us to conversion; because it has the power to change our lives and to lead us out of darkness into the light. #SundayoftheWordofGod

Let us make room for the Word of God! Each day, let us read a verse or two of the Bible. We will discover that God is close to us, that He dispels our darkness and, with great love, leads our lives into deep waters. #SundayoftheWordofGod