Hot Topics
Pope Francis on Spotify. First Interview on a Podcast: The One Who Escaped from the Vatican Was Saint John Paul II
USA: Trust in American Institutions. Religious Organizations Are Better Placed than Congress or the President
Pope Announces that Two Women Will Assist Him in the Dicastery that Chooses the Bishops from Around the World
Census Shows that Only Four Out of Every 10 Australians are Christians. Catholics Are a Majority but Those with No Religion Increase
Ten Years After the Beginning of Pope Francis’ Pontificate, What Is Still Pending?
Does the Pope Have Cancer? He himself Answers, Adding that Ukraine Is His Next Objective
What Effect Will Dobbs Have in the International Debate on Abortion?
Nancy Pelosi Receives Communion During Mass in the Vatican (in Other Words, When the Eucharist . . . and the Pope Are Instrumentalized)
Summary of the Pope’s Apostolic Letter “Desiderio Desideravi” on the Liturgy One Year After “Traditionis Custodes”
Russell Crowe, Leading Actor of “The Gladiator,” Will Play the Role of Father Amorth, the World’s Most Famous Exorcist, in a Film

Drawing from the First Reading account of Stephen, the first martyr, being dragged before the Sanhedrin, Pope Francis today strongly condemned the sin of calumny.

At his customary morning Mass in Domus Sanctae Marthae, the Holy Father noted that Stephen was accused of “false witness,” and that his enemies chose “the path of calumny.”

Vatican Radio reported on the Holy Father’s homily, noting that Francis described calumny as worse than sin and a direct expression of Satan.

“We are all sinners; all of us. We all commit sins. But calumny is something else. It is of course a sin, too, but it is something more. Calumny aims to destroy the work of God, and calumny comes from a very evil thing: it is born of hatred. And hate is the work of Satan. Calumny destroys the work of God in people, in their souls. Calumny uses lies to get ahead. And let us be in no doubt, eh?: Where there is calumny, there is Satan himself,” he said.

The Holy Father then noted the contrast of Stephen’s behavior, who did not return falsehood with falsehood.

“He does not want to go that way to save himself. He looks to the Lord and obeys the law,” being in the peace and truth of Christ. And that, Pope Francis said, “is what happens in the history of the Church.”

“But the age of martyrs is not yet over, even today we can say, in truth, that the Church has more martyrs now than during the first centuries,” he continued. “The Church has many men and women who are maligned through calumny, who are persecuted, who are killed in hatred of Jesus, in hatred of the faith: some are killed because they teach the catechism, others are killed because they wear the cross … Today, in many countries, they are maligned, they are persecuted … they are our brothers and sisters who are suffering today, in this age of the martyrs.”

And again Pope Francis repeated, “The age of martyrs is not yet over, the Church has more martyrs now than during the first centuries.”

He said this age of “such great spiritual turmoil” reminds him of an ancient Russian icon that depicts Our Lady covering the people of God with her mantle: “We pray to Our Lady to protect us, and in times of spiritual turbulence the safest place is under the mantle of Our Lady. She is the mother who takes care of the Church. And in this time of martyrs, she is the protagonist, the protagonist of protection: She is the Mother. (…) Let us state with faith: Mother, the Church is under your protection: Care for the Church.” 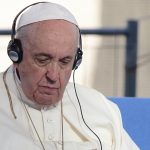 Pope Francis on Spotify. First Interview on a Podcast: The One Who Escaped from the Vatican Was Saint John Paul II

In regard to the myth that Pope Francis escapes from the Vatican and goes around the streets, he answers: “It’s not true,” adding that “the one who did this was Saint John Paul II. He found a way.” 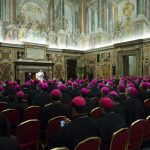