Hot Topics
Analysis: United States Supreme Court Rules against Abortion in the Country’s Constitution
Vatican: From Schindler’s List to Pope Pacelli’s List. This Is How Archbishop Paul Gallagher Explains the Vatican’s Documents Online on the Jews
Vatican Puts Online Archives on World War II and Persecution of Jews
Pope Francis receives in audience the new lieutenant of the Order of Malta
Seminarian in Hospital Bed with Terminal Cancer Is Ordained Priest
“It Doesn’t Cross my Mind to Resign,” Says Pope to Brazilian Bishops
United States: Supreme Court Declares Constitutional the Funding of Religious Schools
No Social Network Can Substitute the Mass, Says the Pope in the Preface of a Book on the Church and the Digital World
These Are the Ten Countries that Give Most Money to the Pope’s Charitable Works
Nigeria: 15 Days Later,  A New Massacre in Two Churches of the Country

As many popes and saints have told us, whoever wants to change the world must first start with his own heart. For it is in the heart that our real-life decisions are made; the heart is the true place of faith. Scripture similarly sees godlessness not as a matter of the intellect, but of the heart. “The fool says in his heart, there is no God”, as Psalm 14 tells us. Wisdom of heart is not something we learn, like mathematics. It is a question of the inner life. This is why the one-year formation course for young people aged 18 to 30 at the Jeunesse Bonheur School in Cotonou, Benin, rests on the four pillars of contemplation, education, community, and mission. It is the first school of its kind in Africa and is based on the principles behind the Jeunesse Lumière Mission school, originally founded in France by Father Daniel Ange. 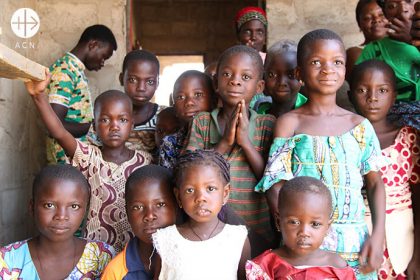 One year formation course for young people in Cotonou, Benin.

The idea is that by the witness of their lives, these young people should become prophets for their own generation. For Father Cyrille Miyigbena, the head of the school, it is above all a program of humanity. “You can learn anything”, he says: “joy, a smile, respect for others, punctuality, love for work well done, justice, a sense of community, cleanliness, tidiness, patience, forgiveness, self-control – in short, all the virtues the lack of which is so painfully obvious in today’s society. All these things are learned in the school of Christ, the true Master of the interior life.” Consequently, it is hoped the young people graduating from this school will take these virtues into society, through their Christian way of life. At the end of her year in Cotonou, Vicentia is firmly convinced. “I have realized that by abandoning ourselves totally to the spirit of love, we can come to see other people as a gift of God, with all their strengths and limitations.” Fabrice now sees their mission in the following light: “Just as a scientific experiment proves the validity of a thesis, so our mission testifies to the truth of the Gospel. Without this testimony, the Christian is lacking an essential dimension.” 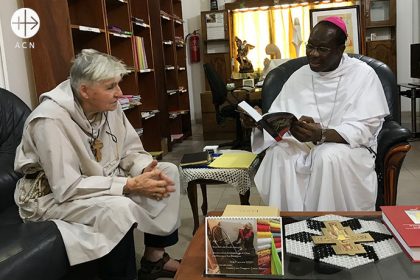 Patrons of the school: Mgr. Roger Houngbédji, Archbishop of Cotonou, and Père Daniel Ange, the founder of the Jeunesse Lumière.

The fruits of the school are self-evident. Just three years after opening its doors to students, the school has seen 12 young men enter the seminary, whilst five others have discerned vocations to religious life and a number of others now work in various dioceses across the country. The school is growing at such a rate it needs to relocate and is now set to leave the minor seminary in Cotonou. Young people from Malawi, South Sudan, Burkina Faso, Mali and Ivory Coast are already applying for places. The school has become a beacon of humanity for Africa. The land is available and the plans are also ready. Now they need help, so they can begin building. Aid to the Church in Need had promised €50,000.

To serve the Gospel and our brothers and sisters, to offer our own lives without expecting anything in return, without seeking any worldly glory: this is what we are called to.