Hot Topics
After the Supreme Court’s Ruling, the State of Kansas Approved Abortion by Referendum
Pope Makes Clear What He Understands by “Synodality”: “It’s Not the Last Minute Recipe of the Church”
Pope Appoints as His Personal Health Assistant the Nurse “Who Saved His Life”
Pope Takes Up Again the General Audiences and Talks About His Trip to Canada
Pope Francis to 50,000 Young People in Medjugorje: “It’s Not Enough to Come Out of Oneself, One must Know to Whom to Go”
Bishops Evidence Sectarian Drift of U.S. Congress
Pope Francis Asks the Church to Pray for Small and Medium Businesses During August
Pope’s Next International Trip: Kazakhstan. Ecumenical and Diplomatic Challenges
Pope Francis Bids Farewell to Canada, Asks for Forgiveness Again and Gives Three Tips to Young People
Pope Suggests Three Challenges to the Church in Canada: To Witness, To Be Fraternal and to Make Jesus Known

Asylum seekers on the Greek island of Lesbos are each there for different reasons, according to Caritas.

One Afghan father says he is protecting his daughter after a rival tribe claimed her as a bride price in a dispute. Another has seen his own father tortured and killed and knows he is on the same list. A third is looking for medical treatment to prevent his blindness from deteriorating.

There are 42,000 asylum seekers trapped on the five hotspots on the Greek islands. They have fled persecution in Afghanistan, Iran, and Syria. Half of them live in and around Moria Camp on Lesbos, with 20,000 people in a camp intended for just 3000. Half of the camp’s population is under 18. Families live without tents. Sanitation and health services are minimal. Mud and rubbish run through it. One thousand children traveling without a guardian have no protection, no education, no healthcare. Many of them are sleeping out in the open.

The numbers are down since the peak of the migrant and refugee influx in 2015 and 2016, but the challenges facing those seeking a safer future have morphed.

“Back then, Lesbos was a transit center where people would quickly move on. Now these people are stuck here for months, and in Moria that means living in dangerous and inhumane conditions,” says Maritina Koraki, coordinator of Caritas Hellas (Caritas Greece) programs for Lesbos.

Caritas has adapted its work from providing aid for people on the move to now focusing on education, skills training, and trauma counseling to those stranded in one place. 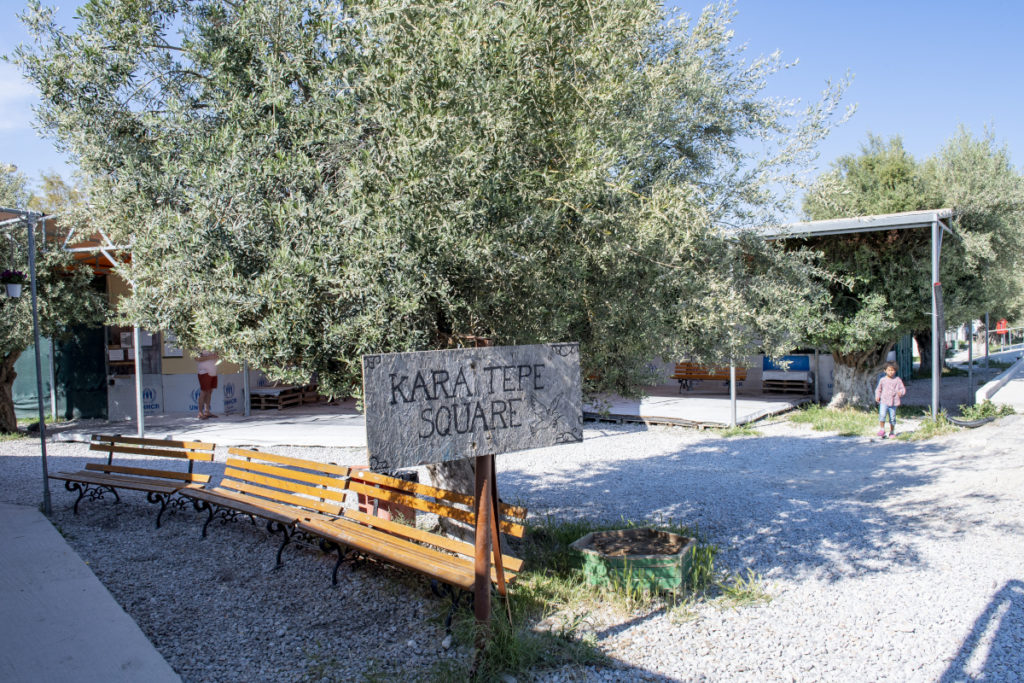 Moria is officially a closed detention center run by the government where most aid organizations like Caritas don’t work. Instead, the focus for Caritas is another camp called Kara Tepe. It’s run by the local authorities in Lesbos, there is a fixed number of 1300 residents, with one family in each prefab shelter.

“It’s for vulnerable cases only – large families, single mothers with children, people with physical or mental disabilities,” said Koraki. “The people in Kara Tepe have specific problems which need specialist treatment such as therapy for trauma.”

Caritas has on-site psychologist, supports both a women’s and a men’s center, offers classes in Greek and English and provides some legal help with asylum applications or specific medical problems. 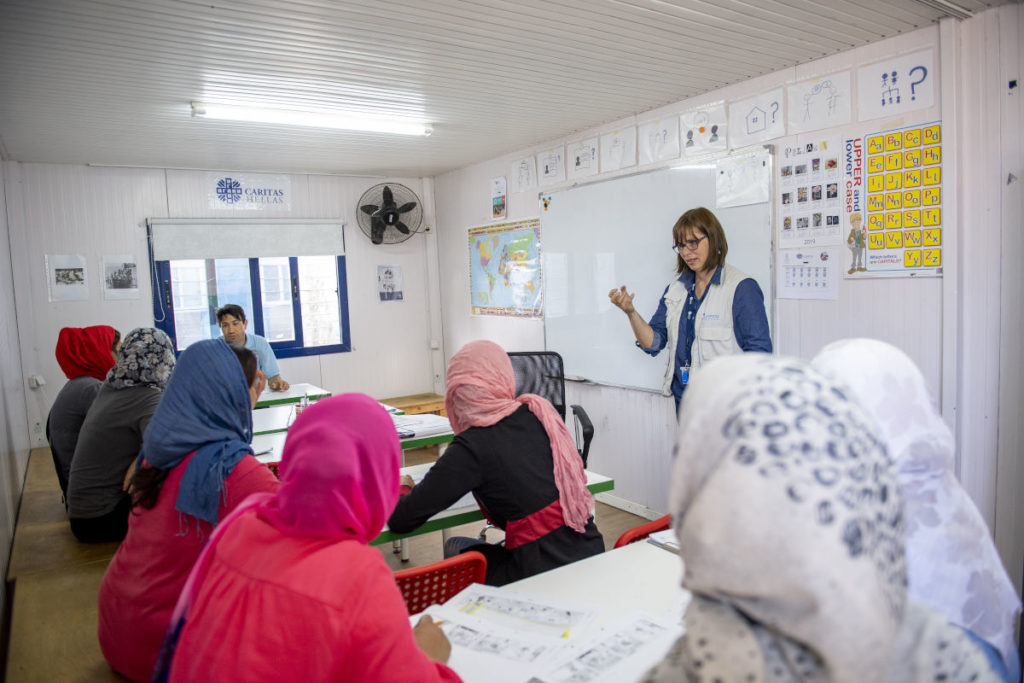 The English and Greek courses for adults offered by Caritas Hellas Language Center at Kara Tepe in Lesbos are very popular. Photo by Bente Stachowske/Caritas Germany

Madgid Kazikhani fled Afghanistan to Iran when his father was tortured and executed by the Taliban for studying in Ukraine. Then he fled Iran when he was ordered to fight in the Syrian war.

His family, a wife and four children reached Lesbos after being pulled out of the Mediterranean Sea when their makeshift raft sank.

“I didn’t come here for fun. I came here because I didn’t have a choice. I don’t want money or a house, I just want to keep my family safe,” he said.

One of his sons has severe health issues so the family was moved out of Moria to Kara Tepe. “Caritas helped me organize the legal papers so I could take my son for treatment in Athens,” he said. He also benefits from the language classes Caritas offers and in return teaches sport to the children.

Worsening situation and COVID-19 in Lesbos

The situation on Lesbos and other Greek islands and land crossings with Turkey has deteriorated in 2020 after an upsurge in fighting in Syria. Turkey opened its borders and Greece adopted a hard-line approach to asylum speakers. Caritas Hellas joined other aid agencies to protest.

“The situation is extremely tense and frustrating. It’s the result of a lack of effective policies in the last five years, the worsening of the situation was foreseeable,” said Maria Alverti, director of Caritas Hellas.

A coronavirus case has been diagnosed on Lesbos and fears are that it could be spread to the camp. Violence between the camp residents, between locals and asylum seekers and against aid workers is on the rise.

Money for the Caritas programs is also under pressure with donors looking at other priorities. “The wars that forced these people to flee haven’t gone away, said Maritina Koraki on Lesbos. “Neither has their suffering and need for our help.”

Reviving a dialogue happens not with words, but witth silence; not by insisting, but by patiently beginning anew to patiently listen to another person, hearing about their struggles and what they carry inside. The healing of the heart begins with listening.