“Let us ask the crucified God to grant us the grace to be more united and more fraternal…”
Pope Francis encouraged this when participating today, Oct. 20, in this year’s International Meeting on the theme “No One Is Saved Alone. Peace and Fraternity,” promoted by the Community of Sant’Egidio. Every year, the Encounter recalls the historic Day of Prayer for Peace convoked in Assisi by St. Pope John Paul II in 1986, with representatives of all the world religions. 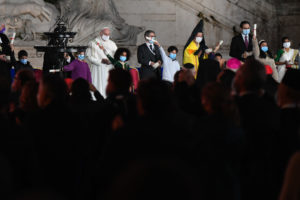 The title of this year’s Meeting was inspired by Pope Francis’ words during his March 27 Extraordinary Urbi et Orbi in a pouring St. Peter’s Square, for the end of the coronavirus. This 2020 Meeting marks the second time Pope Francis has participated in the encounter, following his traveling to Assisi for the event in 2016.
Normally at meetings, hundreds of religious leaders and representatives gather from more than 50 countries worldwide. This year, to be safe amid the COVID pandemic, the Ceremony to Pray for Peace is taking place in the afternoon at Rome’s iconic Campidoglio with interfaith leaders and important officials, including President of the Italian Republic, Sergio Mattarella and the Ecumenical Patriarch of Constantinople Bartholomew I. 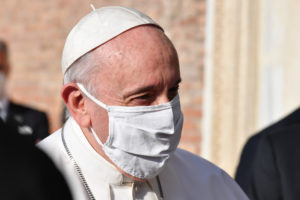 ZENIT’s Senior Vatican Correspondent was present at the Campidoglio today as this year’s meeting is in Rome. 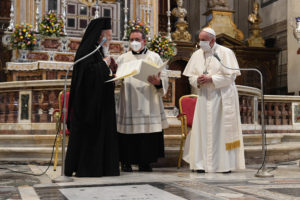 Ahead of the event she had interviewed the President of the Community of Sant’Egidio, Marco Impagliazzo, who noted that this year’s 34th Prayer for Peace was organized in full compliance with all hygiene and health rules, “because in this difficult time, there is a need for words of peace and hope, which indicate a future for humanity overwhelmed by the pandemic.”
After having presided over the moment of ecumenical prayer for peace with other Christian confessions in the Basilica of Santa Maria in Aracoeli this afternoon, Pope Francis took part in the ceremony with the representatives of the great world religions in the Piazza of the Campidoglio, where the Holy Father spoke.
There was a minute of silence in memory of the victims of the pandemic and all wars, immediately followed by the reading of the Rome 2020 Appeal for Peace. Some children received the appeal text from the religious leaders and delivered it to the ambassadors and representatives of national and international politics present.
At the end of the meeting, after the lighting of the candles of peace by the Holy Father and the religious leaders and exchanging, without contact, a sign of peace.
The Holy Father gave a moving homily during the Prayer of Christians, where he reflected on how before His Crucifixion that many told Him to save Himself. 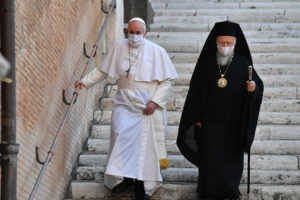 “When we are tempted to follow the way of this world,” he said,’ “may we be reminded of Jesus’ words: “Whoever would save his life will lose it; and whoever loses his life for my sake and the Gospel’s will save it” (Mk 8:35).
“What is counted loss in the eyes of the world is, for us,” he said, “salvation.”
Francis invited Christians to learn from the Lord, “who saved us by emptying himself and becoming other,” noting from “being God, He became man; from spirit, He became flesh: from a king, He became a slave.”
“He asks us to do the same,” he reminded: “to humble ourselves, to “become other” in order to reach out to others. The closer we become to the Lord Jesus, the more we will be open and “universal”, since we will feel responsible for others.” Others, he noted, will become the means of our own salvation, all others. 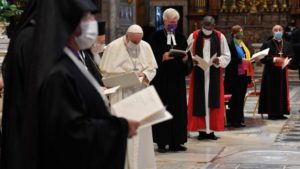 “May the Lord,” he prayed, “help us to journey together on the path of fraternity, and thus to become credible witnesses of the true God.”
In the Pope’s address at Campidoglio, the Pope expressed his gratitude, despite the difficulties of travel these days, that other faith leaders, along with himself, wished to take part in this prayer meeting. The Assisi Meeting and its vision of peace, he said, “contained a prophetic seed that by God’s grace has gradually matured through unprecedented encounters, acts of peacemaking and fresh initiatives of fraternity.” 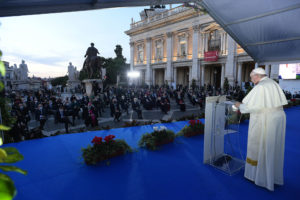 Although these years have witnessed painful events, “including conflicts, terrorism and radicalism, at times in the name of religion,” he admitted, “we must also acknowledge the fruitful steps undertaken in the dialogue between the religions. This is a sign of hope that encourages us to continue cooperating as brothers and sisters.” A product of this fruitful dialogue, the Pope noted, arrived at the important Document on Human Fraternity for World Peace and Living Together , which he signed with the Grand Imam of Al-Azhar, Ahmad Al-Tayyeb, in 2019 in Abu Dhabi.

The Appeal began noting that those of different religious traditions present gathered in order to send a message of peace.

“To show clearly that the religions do not want war and, indeed, disown those who would enshrine violence.” They also asked everyone to pray for reconciliation and to strive to enable fraternity to pave new paths of hope.

“We solemnly commit ourselves,” they promised, “to make this Appeal for Peace our own and to propose it to the leaders of nations and the citizens of the world.” In these uncertain times, as we feel the effects of the Covid-19 pandemic that threatens peace by aggravating inequalities and fear, they acknowledge, “we firmly state that no one can be saved alone: no people, no single individual!”

“The time has come to boldly dream anew that peace is possible, that it is necessary, that a world without war is not utopian,” they stated, explaining: “This is why we want to say once more: ‘No more war!'” They invited leaders of nations to work together to create a new architecture of peace. 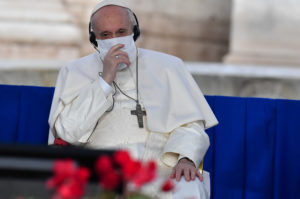 “Let us join forces to promote life, health, education and peace,” the appeal urged. “Let us waste no time!” it demanded, suggesting: “Let us start with achievable goals: may we immediately join our efforts to contain the spread of the virus until there is a vaccine that is suitable and available to all. The pandemic is reminding us that we are blood brothers and sisters.” Calling for all believers, and people of good will to become creative artisans of peace, friendship and dialogue, no one, it stressed, can feel exempted from this, noting all of us have a shared responsibility.

The Appeal for Peace concluded, praying: “May God inspire in us a commitment to these ideals and to the journey that we are making together. May he touch every heart and make us heralds of peace.”

Pope Francis has been close to the Community, often at its events and collaborating or promoting different initiatives, for the homeless, migrants and refugees, and the prayer for peace. He also has worked with the Community’s peace initiatives in Mozambique, Lesbos, and even if from Rome, regarding South Sudan. 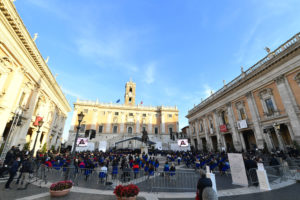 Tomorrow, Tuesday, is the official opening of the International Meetings of Prayer for Peace with the title “No one is saved alone – #Peace and #Fraternity ” organized by the Community of Sant'Egidio in #Rome , #Italy@m_abdelsallam @Pontifex @santegidionews pic.twitter.com/bsldhHvUJ2