(ZENIT News / cologne, 22.07.2022).- Shortly after the Holy See issued a Statement on the German Synodal Path, Mrs Irme Stetter-Karp and Bishop Georg Bätzing, President of the Central Committee of German Catholics (ZdK) and President of the German Episcopal Conference, respectively, issued a press release by way of answer.

“We are pleased that the Holy See re-emphasizes what we have already committed to in the internal Statues and Regulation before the start of the 2019 Synodal Path: the decisions of the Synodal Assembly do  not by themselves have legal effects. The authority of the Episcopal Conference  and of each one of the diocesan Bishops to promulgate legal rules and exercise its magisterium in the ambit of its respective competencies is not affected by the resolutions,” they write at the beginning.

Quoting articles 11 and 12 of the Regulation for this Synodal Path, they also state that “The decisions whose matters are reserved to aa universal ecclesiastical regulation will be transmitted to the Apostolic See as vote of the Synodal Path.”

Then they say that “We will not tire to stress that the Church in Germany will not follow a “special German route.” Nevertheless, we consider it our duty to set out clearly the cases in which, in our opinion, changes are necessary. In doing so, we already see that the problems and questions we have mentioned are similar across the world.” 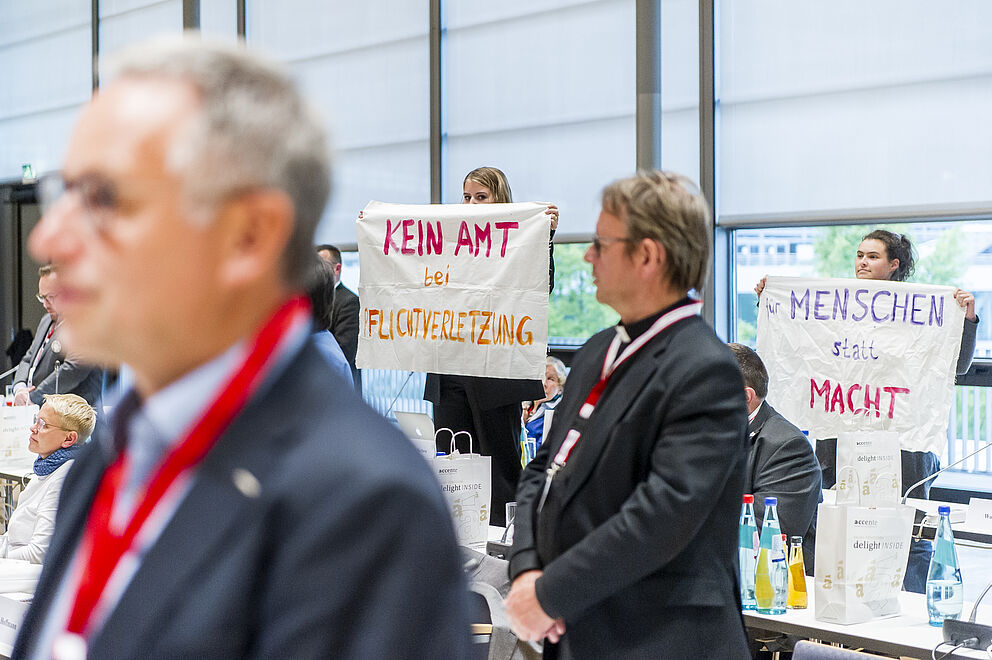 They recall that “the Synodal Path is the consequence of the study on “Sexual Abuse of Minors by Priests, Deacons and Catholic men religious in the ambit of the German Episcopal Conference” (Study MHG) and we are grateful that the Bishops and the Central Committee of German Catholics are following this path together and can be sure of the active support and cooperation of God’s pilgrim people.”

In regard to the World Synod of the Catholic Church, which Pope Francis initiated, they say that the Holy See’s statement also encourages them to contribute in that other process: “we will contribute to the synodal process of the universal Church with the experiences and results of the Synodal Path. We have always stressed that we want to configure this process actively through our work, because we are convinced that this leads to “mutual enrichment” (Statement of the Holy See).”

Pointed out also in the press release of response is that “In the Regulation and in the Statutes of the Synodal Path, we formulate the communication with the Apostolic See, which we consider necessary and which we want. The Apostolic Nuncio in Germany is invited to participate in the Synodal Path as Permanent Observer.”

Using less friendly language, the Holy See’s Statement is answered in the following terms: “Since the beginning of the Synodal Path, the bulwark has been reinforced to find direct ways of communication with the Roman Authorities. In our opinion, this would be the place for these clarifications. Sadly the Presidium of the Synod has not yet been invited to a debate. We lament with irritation that this direct communication has not happened up to now. To our understanding, a Synodal Church is different! This also applies to the present way of communication, which amazes us. It’s not a testimony of a good style of communication inside the Church if the Statements are not published by their name.”

Pointed out by way of conclusion is that “the next Synodal Assembly will be the place to take up the Holy See’s concern, as well as to discuss it. Once again, as Presidents of the Synodal Way, we stress that we are desirous of holding early conversations with the greatest possible number of organisms of the Roman Curia.”

Mrs Irme Stetter-Karp, Co-President of the German Synodal Path, has also positioned herself recently in favour of abortion.