(ZENIT News / Vatican City, 11.01.2023).- On Wednesday, January 11, the Pope began a new series of catecheses focused on the passion for evangelization. The catechesis was held in Paul VI Hall.

Here is the text in English with phrases and headers in bold added by ZENIT.

Today we begin a new cycle of catechesis, dedicated to an urgent and decisive theme for Christian life: the passion for evangelisation, that is, apostolic zeal. It is a vital dimension for the Church: the community of Jesus’ disciples is in fact born apostolic, born missionary, not proselytizing. And from the start we have to distinguish: being missionary, being apostolic, evangelizing, is not the same as proselytizing, they have nothing to do with one another. It concerns a vital dimension for the Church. The community of the disciples of Jesus is born apostolic and missionary. The Holy Spirit moulds it outwardly — the Church moves out, that goes out — so that it is not closed in on itself, but turned outward, a contagious witness of Jesus — the faith is also contagious — reaching out to radiate His light to the ends of the earth. It can happen, however, that the apostolic ardour, the desire to reach others with the good news of the Gospel, diminishes, becomes tepid. Sometimes it seems to be eclipsed; there are “closed-off” Christians, they don’t think of others. But when Christian life loses sight of the horizon of evangelization, horizon of proclamation, it grows sick: it closes in on itself, becomes self-referential, it becomes atrophied. Without apostolic zeal, faith withers. Mission, on the other hand, is the oxygen of Christian life: it invigorates and purifies it. Let us embark, then, on a process of rediscovering the evangelising passion, starting with the Scriptures and the Church’s teaching, to draw apostolic zeal from its sources. Then we will approach some living sources, some witnesses who have rekindled within the Church the passion for the Gospel, so that they may help us to rekindle the fire that the Holy Spirit wants to keep burning within us. 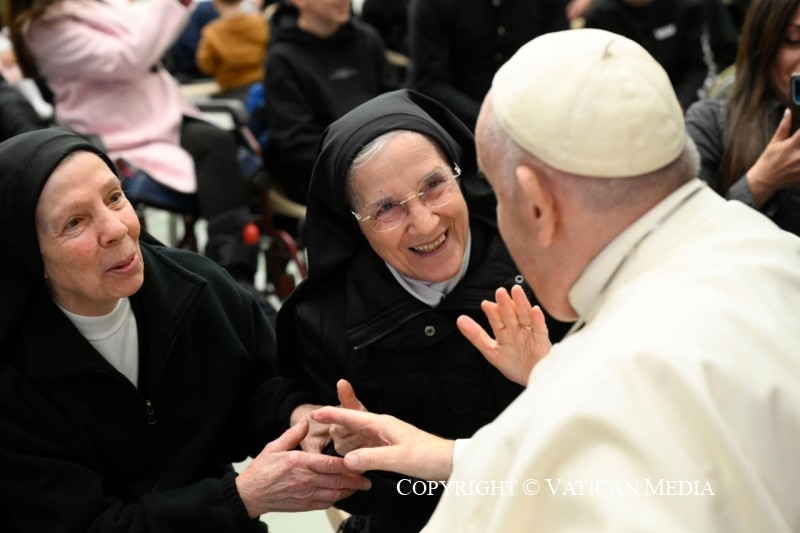 And today I would like to begin with a somewhat emblematic Gospel episode; we [just] heard it, the call of the Apostle Matthew. And he himself tells the story in his Gospel, which we have heard (cf. 9:9-13).

[Jesus’ Gaze Fixes on People’s Nouns, Not Their Adjectives]

It all begins with Jesus, who, the text says, “sees a man.” Few people saw Matthew as he was: they knew him as the one who was “sitting at the tax booth” (v. 9). He was, in fact, a tax collector: that is, someone who collected taxes on behalf of the Roman empire that occupied Palestine. In other words, he was a collaborator, a traitor to the people. We can imagine the contempt the people felt for him: he was a “publican,” as they were called. But in the eyes of Jesus, Matthew is a man, with both his miseries and his greatness. Be aware of this: Jesus does not stop at the adjective — Jesus always seeks out the noun. “This person is a sinner, he’s that kind of person…” these are adjectives: Jesus goes to the person, to the heart, “This is a person, this is a man, this is a woman.” Jesus goes to the subject, the noun, never the adjective, He leaves aside the adjectives. And while there is distance between Matthew and his people — because they see the adjective, “publican” — Jesus draws near to Him, because every man is loved by God. “Even this wretch?” Yes, even this wretch. Indeed, the Gospel says He came for this very wretch: “I have come for sinners, not for the righteous.” This gaze of Jesus is really beautiful. It sees the other, whoever he may be, as the recipient of love, is the beginning of the evangelising passion. Everything starts from this gaze, which we learn from Jesus.

[How Do We Look Upon Others?]

We can ask ourselves: how do we look upon others? How often do we see their faults and not their needs; how often do we label people according to what they do or what they think! Even as Christians we say to ourselves: is he one of us or not? This is not the gaze of Jesus: He always looks at each person with mercy and indeed with predilection. And Christians are called to do as Christ did, looking like Him especially at the so-called “distant ones.” Indeed, Matthew’s account of the call ends with Jesus saying, “I have not come to call the righteous, but sinners” (v. 13). And if any one of us considers themselves righteous, Jesus is far away. He draws near to our limitations, to our miseries, to heal them. 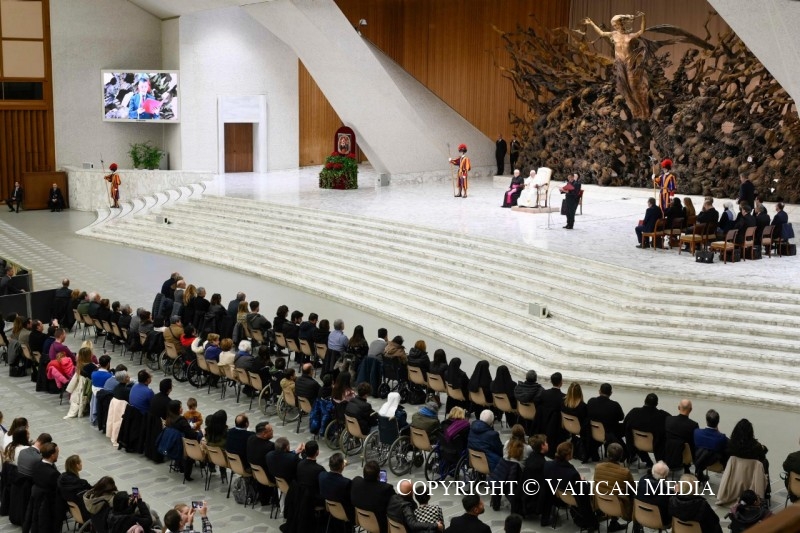 [It All Starts with Jesus’ Gaze]

It all starts, then, with the gaze of Jesus. “He sees a man,” Matthew. This is followed – second step — by a movement. First the gaze: Jesus sees. Second, movement. Matthew was sitting at the tax office; Jesus said to him: “Follow me.” And “ he rose and followed Him” (v. 9). We note that the text emphasises that “he rose.” Why is this detail so important? Because in those days he who was seated had authority over the others, who stood before him to listen to him or, as in that case, to pay tribute. He who sat, in short, had power. The first thing Jesus does is to detach Matthew from power: from sitting to receive others, He sets him in motion towards others, not receiving, no: he goes out to others. He makes him leave a position of supremacy in order to put him on an equal footing with his brothers and sisters and open to him the horizons of service. This is what Christ does, and this is fundamental for Christians: do we disciples of Jesus, we Church, sit around waiting for people to come, or do we know how to get up, to set out with others, to seek others? Saying, “But let them come to me, I am here, let them come,” is a non-Christian position. No, you go to seek them out, you take the first step.

A look — Jesus sees; a movement — “he rose”; and third, a destination. After getting up and following Jesus, where will Matthew go? We might imagine that, having changed the man’s life, the Master would lead him to new encounters, new spiritual experiences. No, or at least not immediately. First, Jesus goes to his home; there Matthew prepares “a great feast” for Him, in which “a large crowd of tax collectors” — that is, people like him — takes part (Luke 5:29). Matthew returns to his environment, but he returns there changed and with Jesus. His apostolic zeal does not begin in a new, pure, place, an ideal place, far away, but instead he begins there where he lives, with the people he knows. Here is the message for us: we do not have to wait until we are perfect and have come a long way following Jesus to bear witness to Him, no. Our proclamation begins today, there where we live.

And it does not begin by trying to convince others, no, not to convince: by bearing every day to the beauty of the Love that has looked upon us and lifted us up. And it is this beauty, communicating this beauty that will convince people — not communicating ourselves but the Lord Himself. We are the ones who proclaim the Lord, we don’t proclaim ourselves, we don’t proclaim a political party, an ideology. No: we proclaim Jesus. We need to put Jesus in contact with the people, without convincing them but allowing the Lord do the convincing. For as Pope Benedict taught us, “The Church does not engage in proselytism. Instead, she grows by ‘attraction’” (Homily at the Opening Mass of the 5th General Conference of the Latin American Episcopate and of the Caribbean, Aparecida, May 13, 2007). 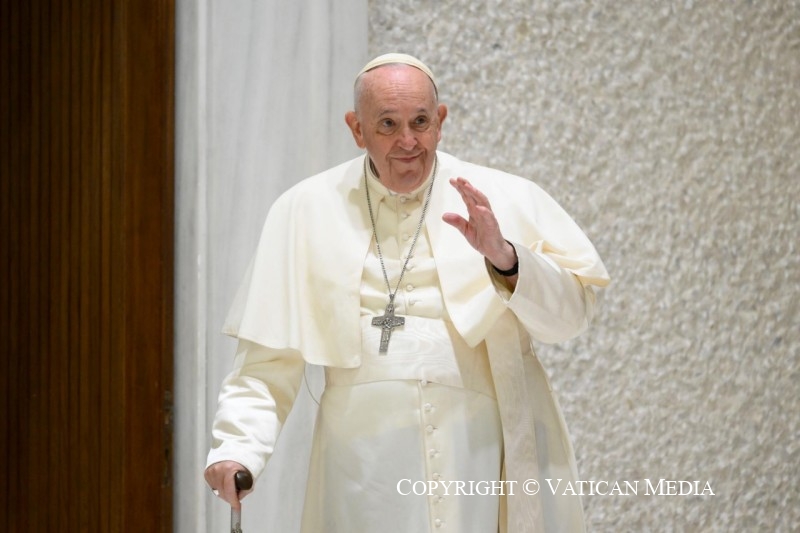 Don’t forget this: when you see Christians proselytising, making a list of people to come. . . these are not Christians, they are pagans disguised as Christians, but the heart is pagan. The Church grows not by proselytism, it grows by attraction.

I remember once, in a hospital in Buenos Aires, the women religious who worked there left because they were too few, and they couldn’t run the hospital. And a community of sisters from Korea came. And they arrived, let’s say on a Monday for example (I don’t remember the day). They took possession of the Sisters’ house in the hospital and on Tuesday they came down to visit the sick in the hospital, but they didn’t speak a word of Spanish. They only spoke Korean and the patients were happy, because they commented: “Well done! These nuns, bravo, bravo!” “But what did the Sister say to you?” “Nothing, but with her gaze she spoke to me, they communicated Jesus,” not themselves, with their gaze, with their gestures. To communicate Jesus, not ourselves: This is attraction, the opposite of proselytism.

This attractive witness, this joyful witness is the goal to which Jesus leads us with His loving gaze and with the outgoing movement that His Spirit raises up in our hearts. And we can consider whether our gaze resembles that of Jesus, to attract the people, to bring them closer to the Church. Let’s think about that.