On his arrival at the office, he was welcomed by the Archbishop Secretary, Monsignor Giorgio Demetrio Gallaro, and the Undersecretary, with whom he spoke briefly before going to the Hall of Meeting, where he met with the Staff and expressed words of greeting to them and introduced them to the work that the Dicastery offers to the Holy Father for the life of the Catholic Oriental Churches. 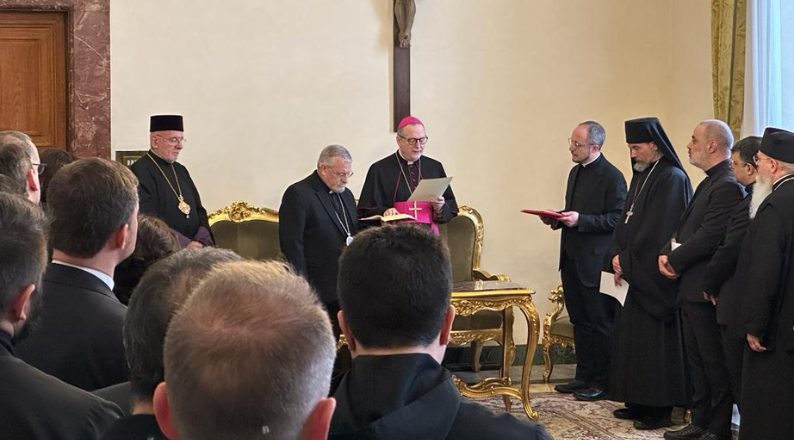 At 12 noon, in the Hall of Honour, the Veni Creator Spiritus  hymn was intoned and the Holy Father’s signed Letter was read with the appointment of Monsignor Claudio Gugerotti, in the presence of the Procurators of the Patriarchs and Major Archbishops to the Holy See, of the Rectors of the Oriental Colleges in Urbe, of some Superiors General or local Superiors of the masculine and feminine Oriental Orders present in Rome, of the Rector of the Pontifical Oriental Institute, and of the Dicastery’s Consultants.

The Prefect then made his Profession of Faith and took the Oath of Fidelity, expressed his greetings to those present, and especially his sentiments of gratitude and filial devotion to the Holy Father.

At the end, after the Blessing and the singing of the Marian Antiphon Alma Redemptoris Mater, the new Prefect greeted the gathered delegations.