“It’s natural that everything that is new interests young people very much. However, the fundamentals are even more important,” says Archbishop of Krakow, Marek Jedraszewski, 68,  since December 8, 2016, the episcopal throne that was Karol Wojtyla’s, who then became Saint Pope John Paul II. 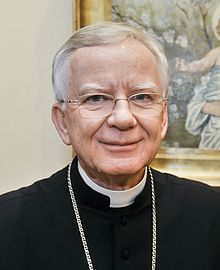 The Catholic Church in Poland is preparing to celebrate, on October 16, 2018, the 40th anniversary of the election of the first Polish Pope in history. However, 2018 also marks the 100th anniversary of Poland’s independence, after 123 years of foreign rule. Archbishop Jedrazewski talked about it with a group of journalists during a visit to Rome, found himself for his commitments connected with the John Paul II Foundation, born in 1981, whose head, by statute, is the Archbishop of Krakow.

One of the Foundation’s tasks is, in fact, to hand down to future generations Pope Wojtyla’s legacy. “Young people today certainly know who Wojtyla is and that he was from Krakow, but they do not know what he taught in 27 years of pontificate, especially to young people. We must open to them, also knowledge of texts still topical today, especially on the theme of Divine Mercy and of its connection with Saint Faustina Kowalska,” explained Archbishop Jedraszewski.

In fact, the anniversary of John Paul II’s election will fall in the middle of the October 2018 Synod on Young People. “I remember his words at Czestochowa, in 1983, during his second visit to the homeland,” recalled the Archbishop, “when he exhorted young people to demand a lot from themselves, even when others don’t exact anything from them. This is a problem of the moral conscience, of responding to today’s cultural challenges. The question is always the same: how must we understand freedom, because there is no true freedom without responsibility or truth about values. However, these are difficult topics in the ‘post-truth’ era, in which there’s no longer a place for objective, absolute truth and stable values.”

After the fall of Communism, predictions were made that, even in Poland, God would soon be forgotten, observed Archbishop Jedraszewski. “The pressure of a new culture makes itself felt. I’m thinking, for instance, of the gender ideology. Despite this, the churches are almost as full today as they were yesterday.” It’s the strange paradox by which today the countries of Eastern Europe are much more Christian than others where the Church has enjoyed much more freedom. “If the Church wishes to remain alive in the world, she can’t forget what Jesus said: ‘if anyone would come after Me, let him deny himself, and take up his cross, and follow Me.’

“If a Christian forgets that there are also crosses and sufferings, then the Church becomes very weak.” However, he added speaking of Poland, “it’s also true that there’s a problem with young people, who no longer find the language of pastors adapted to them.”

According to the Archbishop of Krakow, the 100th anniversary of Polish independence is “the sign of a grace of God: after so many sufferings, in the course of the centuries, we were again an independent State, even if the independence lasted only 20 years, until World War II, the Yalta Conference and the era of Communism. However, if we have survived all this it is thanks to our faith. The history of the Polish nation begins, in fact, with the Baptism of our kings, as John Paul II often stressed. And even when the Polish State no longer existed, as in the 1800s, nevertheless, the nation existed thanks to the Church and also to the Bishops, who paid with persecution for their fidelity to Rome.”

The Polish Church, however, doesn’t intend to celebrate the anniversary of independence with a ’nationalist’ spirit. Saint John Paul II’s last book, ‘Memory and Identity,’ explains the difference between nationalism and patriotism. We are against every form of nationalism, namely, that sentiment of feeling ourselves, as a nation, superior to others. Instead, patriotism also means responsibility to preserve one’s identity, as a richness to give to others.’ And in connection with the initiative of last October 7, anniversary of the Battle of Lepanto and Feast of the Blessed Virgin of the Rosary, the recitation of the Rosary along Poland’s borders, which raised abroad many comments of a negative nature, Jedraszenski denied any anti-Islamic or nationalist meaning of the event. First of all, he specified, the laity promoted it, not the ecclesiastical hierarchies, and the recitation of the Rosary happened not only on the borders of neighbouring countries. “Based on our experience, we Poles know that when solutions to difficult situations aren’t perceived on the horizon, then one must pray the Rosary. The most important meaning of that event is only the testimony of faith to our Mother, the Virgin our protector.” And among the “challenges” to which that event was directed, the Archbishop of Krakow mentioned, for instance, the grave question of abortion: “what to do” one asks, “when so many women and girls say that their freedom consists in killing their child? It’s a tragedy; even the arguments of science don’t mean anything to them, so a grace of God is needed to change the mentality.”

Poland is one of four countries (along with the Czech Republic, Slovakia and Hungary) of the so-call Visegrad group, that on the subject of immigration hold much more restrictive policies than the rest of the European Union. “However, let’s not forget that there is a war in Ukraine. And since 2013, Poland has received more than a million Ukrainians, to whom we must give a house, work . . . We have problems of which, however, the West doesn’t speak much.

Finally, the Archdiocese of Krakow is preparing for another significant event. On Sunday, April 28, 2018, in the Divine Mercy Shrine of Lagiewniki, the Prefect of the Congregation for the Causes of Saints, Cardinal Angelo Amato, will preside over the Rite of Beatification of Hanna Chrzanowska, born in Warsaw in 1902 and died in Krakow in 1973, where she knew and was a collaborator of the priest and then Archbishop Karol Wojtyla. Born into a wealthy and educated family, Chrzarnowska dedicated her life to the service of the suffering as a nurse, promoting the formation and professional protection of nurses and nursing assistance to the sick, through a service linked to institutions of the Church and independent of the inefficient national health service.  Thanks to her efforts, the custom spread of visiting the sick during pastoral visits and celebrating Mass in their homes.

Among the Servants of God in the 1900s, whose Cause of Beatification has opened, is also Jan Tyranowski, humble tailor who in the dark years of the War became the Spiritual Guide of a group of young people of the city. “It’s not difficult to be saints,” he liked to repeat to them. Among them was also Karol Wojtyla, who later recognized that he discovered his vocation to the priesthood in fact thanks to Jan Tyranowski. On January 21, 2017, Pope Francis authorized the Congregation for the Causes of Saints to publish the Decree of his heroic virtues, first step towards Beatification.

Zenit asked Archbishop Jedraszewski what values these two figures represent for the Church of Krakow, which then gifted the world with another Saint, John Paul II, and what made them particularly holy.

“The fact that Tyranowski, a layman, was a Spiritual Guide for Wojtyla is truly interesting,” answered the Archbishop of Krakow. “This was a sign of the importance of the laity in the Church well before this importance was recognized by Vatican Council II, two decades later. Young Wojtyla had the good fortune to meet on his path laymen who were for him a model of how one lives as Christian laymen in the world, especially in difficult times such as that of the War.

“We can say the same of Hanna Chrzanowska, a woman who dedicated herself to organizing a health pastoral at a time in which it was very difficult for the Church to be present in so many realms of public life. Thus it was that the future Pope learned that if the Church wishes to keep herself alive, then she must enter into all the realms where man lives. I am thinking of his first encyclical of 1979, Redemptor Hominis, where he says, in fact, that man is the way of the Church.”

Deborah Castellano Lubov is a Senior Vatican & Rome Correspondent for ZENIT; author of 'The Other Francis' ('L'Altro Francesco') featuring interviews with those closest to the Pope and preface by Vatican Secretary of State Cardinal Parolin (currently published in 5 languages); Deborah is also NBC & MSNBC Vatican Analyst. She often covers the Pope's travels abroad, at times from the papal flight, and has done television and radio commentary, including for Vatican Radio and BBC. She is a contributor to National Catholic Register, UK Catholic Herald, Our Sunday Visitor, Inside the Vatican, and other Catholic news outlets. She has also collaborated with the Vatican in various projects, including an internship at the Pontifical Council for Social Communications, and is a collaborator with NBC Universal, NBC News, Euronews, and EWTN. For 'The Other Francis': http://www.gracewing.co.uk/page219.html or https://www.amazon.com/Other-Francis-Everything-They-about/dp/0852449348/