On the XXXIV World Youth Day (WYD), the Catholic Church in Panama has decided to reveal the hidden face of the country. “When a foreigner arrives in Panama, he might think he’s in Dubai, but that’s just the façade,” says Archbishop José Domingo Ulloa of Panama City, the capital. His comments were reported January 21, 2019, by Aid to the Church in Need.
This Central American country, which has some 4 million inhabitants, more than 80 percent of whom are Catholics, is preparing to receive Pope Francis, host of this major event that will take place from January 22 to 27, 2019.
One of the six most unequal countries in Latin America
According to the World Bank, Panama is one of the six countries with the greatest inequality in Latin America and one of the ten countries with the greatest inequality in the world. “The WYD 2019 will be the occasion to discover the true face of our country”, said Archbishop Ulloa. Last November, the Archbishop, a member of the Order of St. Augustine, received a delegation from the Pontifical Foundation Aid to the Church in Need (ACN) in his Diocese of Panama.
Next to the wide and clean avenues of the capital, bordered by luxury shops, glass skyscrapers, bank branches, and service companies—not forgetting the prestigious canal—Panama reserves its riches for the wealthy.
“Panama has two faces. In the country, by 2015, the richest 10 percent of households had incomes 37 times higher than the poorest 10 percent. These figures reveal to us the social injustice and the high degree of inequality suffered by our people,” emphasizes the Archbishop of Panama. 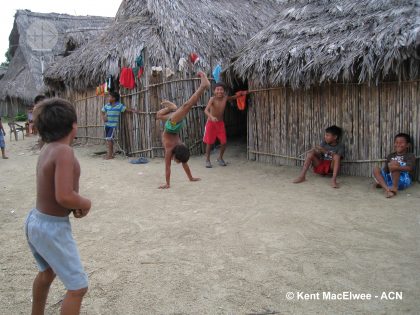 The fate of Afro-descendants is not to be envied. Their ancestors were African slaves exported to Panama in the 15th and 16th centuries, or people from the Antilles who came to work on the construction of the Panama Canal in the 20th century. These people suffer directly from poverty and marginalization. They live in poor neighborhoods and traditionally impoverished areas and provinces such as Colon, Darien, and Panama. Afro-descendants are now mestizos.
In addition, Panama has seven indigenous ethnic groups that represent around 10-12% of the population or half a million people. A significant part of this autochthonous population lives in a situation of serious marginalization and social exclusion.
“The health status of these indigenous peoples is precarious—infant mortality is three times higher than in the rest of the population—and they also suffer from low levels of education and schooling. As a result, this indigenous population does not have access to well-paid jobs, as Panamanian society is essentially a service-oriented society.
Panama is not the Switzerland of Central America
“From the outside, they see a very proud Panama. They think we’re dealing with a Central American Switzerland, but we have to look beyond that: 40% of people work in the undeclared economy. There is a deep Panama that is not reached by development, while international cooperation reduces its aid because it considers Panama to be a developed country,” Maribel Jaen, from the Archbishop’s Justice and Peace Commission, explains to the ACN delegation.
For his part, Bishop Ochogavia, of the Diocese of Colon-Kuna Yala, points out that regional differences are very important: “The people of Colon, who suffer high unemployment, have a bad reputation, so they hide their origin when looking for work. In some families, they have only one meal a day and there is a lack of access to clean water and medical care. Some communities have only one toilet for twenty families! This population lives in a vicious circle that strangles hope.”
“The challenge will be the next day”
For the bishop, the strength of the Church in Panama is its laity, and the impact of the next WYD is already felt: many young people have been involved in the organization of this event. “It’s not just the Catholics; there are even non-believing young people who participate! WYD is a blessing for youth ministry, but also a job opportunity for many young people. 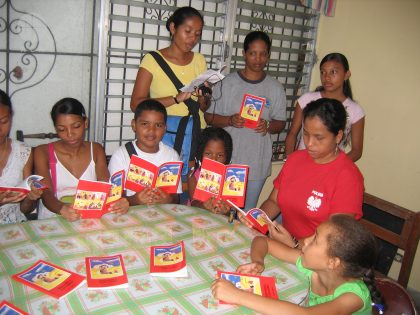 “The challenge will be the next day. It will be necessary to keep the dynamism of WYD, to continue the work, because there is the risk that the charismatic tendency prevails. Very present in Panama, this tendency is often based on the superficial, the emotional, the sentimental. Hence the importance of educating the faithful and the young, in the Social Doctrine of the Church,” says Maribel Jaen.

Archbishop Ulloa also hopes that this WYD, in which 400,000 young people are expected to participate, will offer the opportunity to relaunch and deepen the Social Teachings of the Church, because, in his opinion, the small Church in Panama, which has only 6 dioceses, an apostolic prelature, and an apostolic vicariate, needs a profound renewal.
The Archbishop of Panama celebrates the fact that during the next WYD young people who are expected to attend can become familiar with the social teaching of the Church through the Docat Digital app. Provided by the YOUCAT Foundation, which is part of ACN, its goal is to help young people understand in their own language, by answering their questions, this important aspect of Christian commitment.